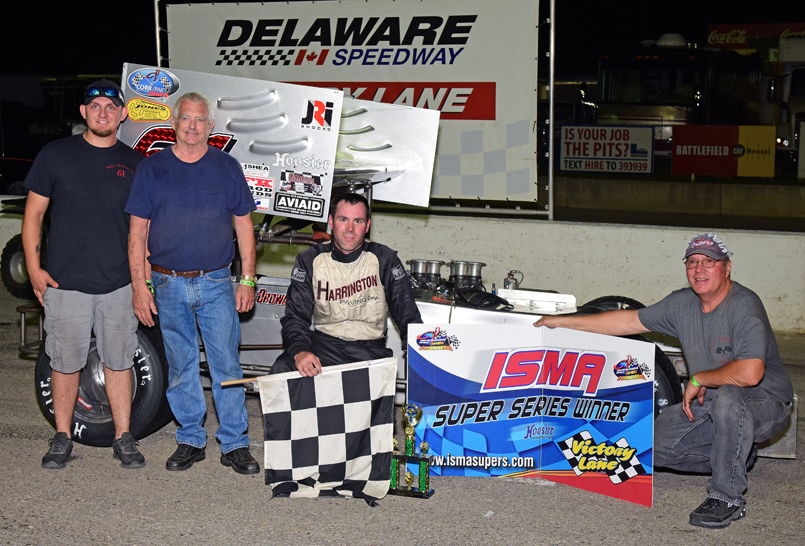 Delaware, Ontario – Though the starting field of the ISMA Harvey Lennox Memorial 75 Saturday at Delaware Speedway in Canada was a little sparse, it was not shy of some spirited racing. Hometown favorite Mark Sammut and Maine driver Mike Ordway Jr. held the front row of the race with Sammut taking the early lead. Sammut and Ordway Jr. played the cat and mouse game, until Ordway Jr. was able to make one of numerous attempts at getting by the veteran Sammut, stick on lap 30. Mike was on cruise from thereon in.

Ordway had some thoughts on the race, and racing in general, after the race.

“We’ve been struggling all year. We were just a little bit off. These guys keep bringing back to North Carolina and changing it. We got it right this week. Obviously we had speed in practice and we got lucky with the draw. It took me a little while to get Mark there. I was actually worried for a while that I wasn’t going to be able to get him. Once we got the clean air, the car was just so good. We still have a little bit of work to do. But, I just can’t thank these guys enough. Clyde and Susan Booth, my dad and family, Ryan, Joe, Ed – everybody that helps out on this thing. Also Mickey and Mike Marollo of Marollo Racing Engines, Ray Evernham, everyone at JRI Shocks. If you want to win open wheel or stock car races, you have to get JRI Shocks! Hoosier Tire, Corr/Pak, Arctic Snow Plows, Shea Concrete – all those who help out. Thanks to Delaware Speedway for letting us come up here every year and race and all the fans who come out.

“You know it’s not a secret that short track asphalt racing is struggling but we’re all in it together and we’re going to keep coming and putting on shows and doing the best we can. As I said we were fortunate this week to have a good race car and to be able to come up here and win two in a row is pretty neat. We struggled at my home track of Lee last week and were kind of perplexed that we were so far off there in a race we won last year. We were disappointed as we’ve run a lot of laps there. To come back here and win two years in a row definitely helps. If we could go on to Oswego and Star and pick up a win or two there that would be pretty big.”

The popular Canadian Sammut described his ultimate second place finish. “We had a really good car actually. We maybe didn’t tightened it up enough for the end. We were slowing pretty good and Mike caught me there obviously and I was lucky to hang on for a while and keep him behind me. But starting on the pole we didn’t have any choice but to go. As soon as I backed off at all, just seeing where we were at, Mike pulled beside me, so I had no choice but to run until he went by me. They were closing in on me at the end but I was petty much hanging on by the end. We burned the car up a little but to take second was good. He definitely had a lot faster car than we did. To finish second here at home and at Delaware, especially the way the season has been going, we most certainly will take it.”

Climbing from his 84 super, obviously happy to be out of the car on the hot, humid night, Mike Lichty commented, “It was a decent race I guess. Three quarters of the race we battled with Ben. It would have been fun to battle like that for the lead but for whatever reason the left rear just grew enormously and we were just crazy short on stagger. But we’ll take it. I know attrition and what not helped too. But definitely something went wacky with the tires and that’s why we kind of struggled to pass race cars. Toward the end I think people were slowing and other than Ordway backing up to me, I think it was a good effort. I just have to thank Craig Reed and the whole Reed family, everybody at Reed Salvage, my father, Patco Transportation; everybody on the crew, Dennis Level and all the guys at the motor shop, and of course Corr/Pak, Hoosier Tire, Eddie Shea – everybody that supports ISMA. Now, we’ll move on to Oswego.”

As aforementioned, the 75 lapper was led from the green by Sammut but an early yellow found Trent Stephens slowing off turn four with a broken drive shaft on the 19. His night was done before even really starting.
On the green, Sammut had Ordway tracking closely behind with Ryan Coniam, Dave McKnight and Kyle Edwards in the top five.

Timmy Jedrzejek was able to replace Edwards in the top five shortly thereafter, but the race just couldn’t get moving when on lap 10 Coniam pulled the Brad Lichty 74 pit side due to a rear end problem. In the interim, Danny Shirey had pulled his Lane ride in to the pits. His McVetta 72 car had declared out for the night earlier with motor problems. Shirey was offered the second Lane car to race, but soon pitted out of the action.

Back underway, the remainder of the race went green, with Sammut and Ordway fighting for first for many laps. Timmy J had a good hold on third while Dave McKnight, Ben Seitz and Mike Lichty put on a show back a little further on the track.

Attrition began to play the cruel foe as Mike Ling, in his second super attempt, pulled in the Sammut-owned 18 on lap 25. 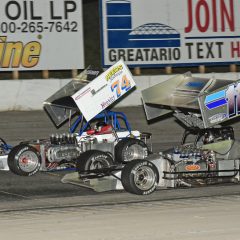 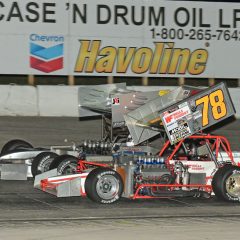 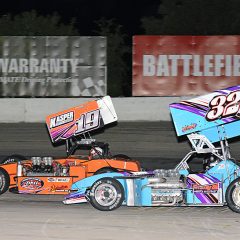 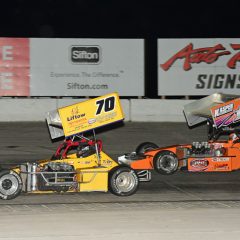 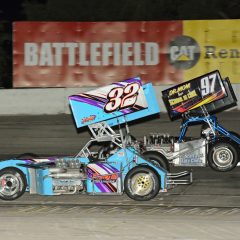 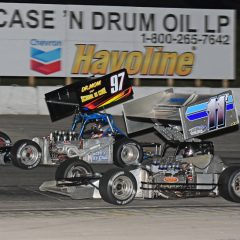 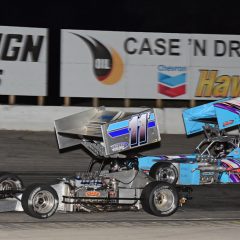 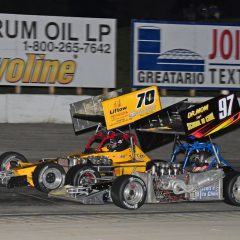 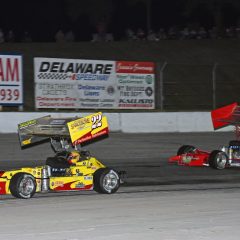 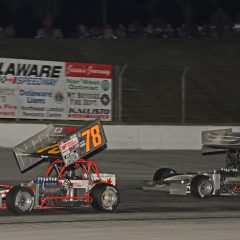 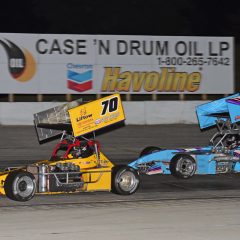 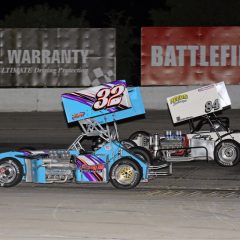 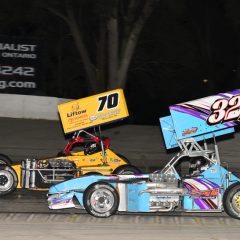 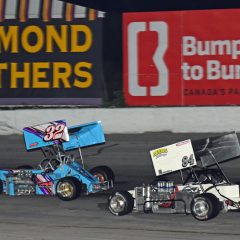 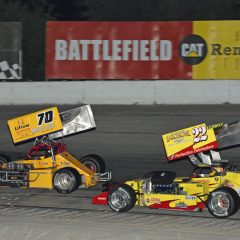 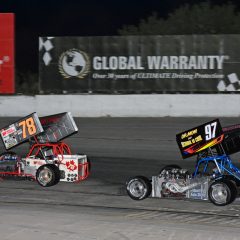 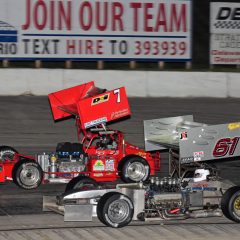 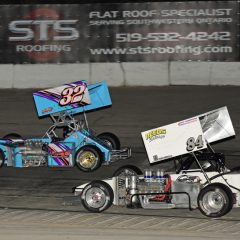 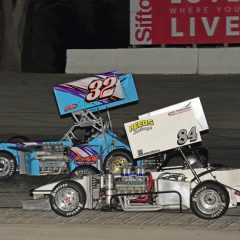 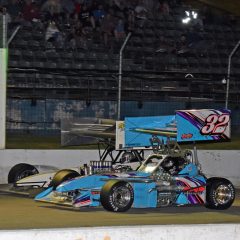 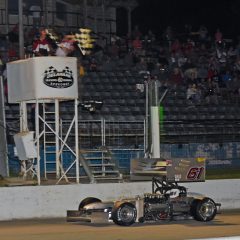 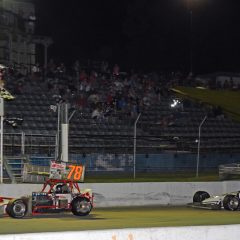 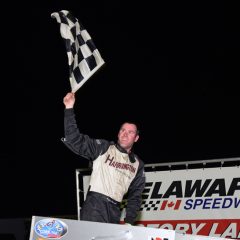 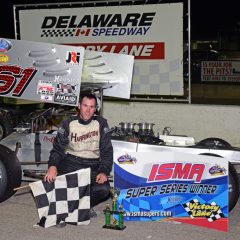 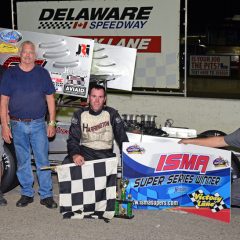 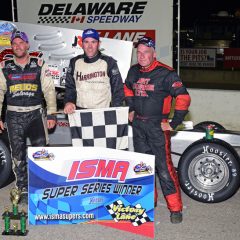 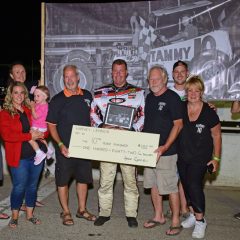 The close battle out front between Sammut and Ordway saw Ordway finally getting by on lap 30 beginning an unchallenged run to the finish, collecting the Don-Mor Carstar halfway bonus along the way. Sammut now contended with Jedrzejek while Seitz, Lichty, Edwards, McKnight, McVetta and AJ Lesiecki behind.

Unfortunately Jedrzejek’s battle was terminated just prior to midway when a motor problem was detected with damage imminent should he continue. Dave McKnight and AJ Lesiecki pitted in the interim.
With 25 to go, Ordway was already nipping at the heels of the end of the field while Sammut rode alone. Seitz, Lichty and Edwards were engaged in some exciting wheel combat.

It was Lichty the beneficiary of the battle near race end when he finally got by Seitz for a podium finish. Seitz and Edwards rounded out the top five.

Seitz felt somewhat satisfied with fourth. “It was a good run. We had a really good race car. We actually had a few mechanical issues but you know what, we’ll take what we can get and we’ll go to Oswego. It’s a fast car we need to work out those mechanical issues, which we will and we’ll be off to the races. We had a good race with Mike who I’ve raced with for many years. He’s as clean as they come so I felt really comfortable racing with him out there.

I’d like to thank Delaware Speedway and hopefully we put on a good show for the fans. I’d like to thank all of our sponsors, and Dan and the crew who have worked hard all season. Unfortunately we haven’t had the results we were looking for but they will come. I’m excited for the rest of the year. Congratulations to Clyde and Mike on their win.”

Edwards, on the other had, was not happy when asked how he felt about his run. “To be honest with you, we sucked. The last 35 laps we had a good car – I thought we had one of the best cars — but the first half of the race we just downright stunk. You just can’t do that in this series. We just have to figure out a better way to get the race car balanced for the next time we come back here. We’ll be going to Oswego next and hopefully we’ll have better luck.