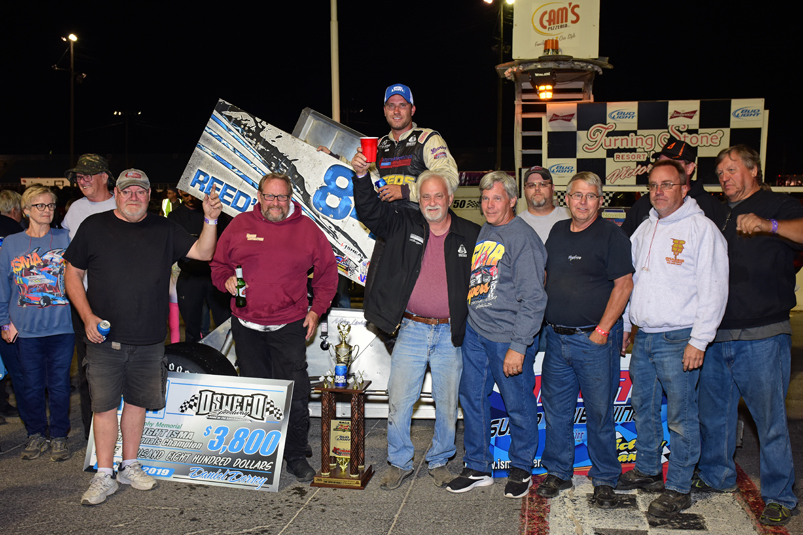 Oswego, NY – Going into the 26th annual Oswego Speedway Bud Light ISMA Super Nationals on Saturday, Timmy Jedrzejek and Mike Lichty each owned six career winged feature wins at Oswego Speedway. While not all those victories were Super National wins, they each had a win in the last two of the Classic Weekend winged show named the Jack Murphy Memorial; Lichty in 2017 and Jedrzejek in 2018.

Saturday night Jedrzejek started on the pole with Lichty back in 11th starting spot and eventually each would end up leading half the 60 laps with Lichty on top at the checkered flag. A series of red flags and some damaging accidents, slowed the race which cut down the huge lead built up by Jedrzejek in the first half. A red flag for a Perley-Shullick accident just before lap 30 gave Lichty, running fourth behind the duo gave a chance to take over the lead, to lead the remaining 30.

Canadian driver Lichty was elated with the win. “ I obviously love coming to Oswego here and it feels good to finally get back in victory lane. I just have to thank everybody: The Torrese family, and all the ISMA sponsors. It was fun racing with Timmy. It seems every Super Nationals we are battling wheel to wheel. I’m glad I was the number one this time and he got second. I want to thank the whole crew, Craig Reed, Reed’s Salvage, everybody with the Reed family, my father, Patco Transportation, and Dennis Level and everybody who supports ISMA.”

Ohioan Jedrzejek commented as the two replayed their race while exiting the podium.

“Boy it would have been nice if it had stayed green. We were really good at the start. The car felt like I was just giving it so much throttle that I knew we had a really strong car. I didn’t know where they were behind me but I felt ‘man if they pass me now they earned it.’ Then after I think it was the second red flag, the car just didn’t come alive like it was earlier. I was battling the front end. Then Mike got me on the restart and made it his show.

“Then, after that last set of cautions, I tried one move out of four and I couldn’t turn it at all. I was going toward the fence so I said I’m not going to try that again. Then I tried to get momentum on the bottom but he was just too strong. I couldn’t really challenge him. It seems lately when we come here it’s the 84 and 97 on the top of this thing so we’ll be back. Congrats to the 84 team. But the 97 car was pretty solid all day. We needed a really good run. We’ve had some bad luck with me in the driver’s seat lately. So we’ll take home a second place and thank all the Howie Lane guys and the Doctor Mom Says School is Cool, Essex Seafood, Enerco Mr. Heater, and everybody else that helps with this team.”

While Timmy J tried to reel in leader Lichty after a late race red which saw Ryan Coniam in a scary incident on the front stretch, Trent Stephens who had been running third, began to close the gap from behind.

Stephens said of his podium finish, “Third place is not bad. Obviously it was not winning but I have to thank the guys today who worked on the car. They got it going pretty good in the heat race and I thought we were really good in the feature but just not fast enough. Towards the end the car kind of came around. I think I was better than Timmy and actually both of us were catching Lichty but I kind of fell off there at the end. I think I pushed it too hard and fried the right front. I’m happy with the car. We had speed, we just need to work on it a little more. I’m happy with another third place here at Oswego. I have to thank Kasper Auto Group, Domino’s Pizza, Schaffer’s Racing Oil, Real Wheel and Bull Dog Rear Ends and obviously the fans. It was a good crowd tonight. I can’t thank them enough.”

The 26th annual Super Nationals 60 did not start well as the red flag fell before one lap was complete for the Mark Sammut 78 and the Dave McKnight 70 coming together with both able to return at the end of the field. But the stage was set for attrition to come. 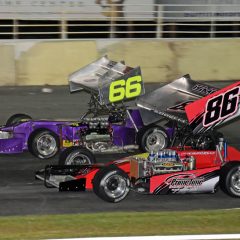 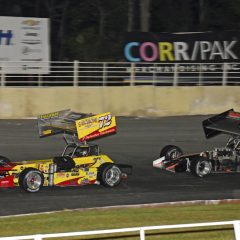 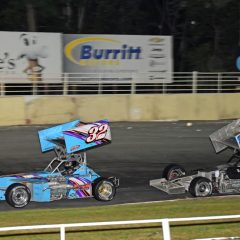 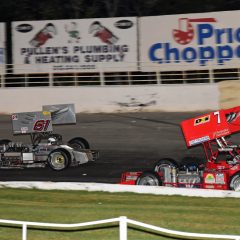 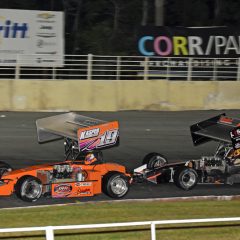 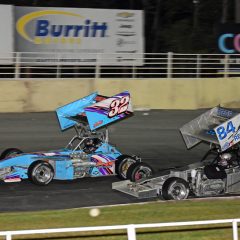 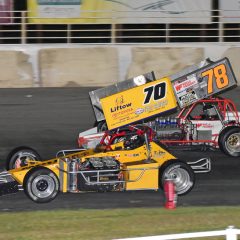 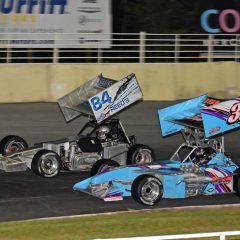 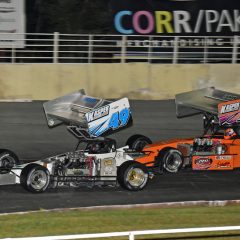 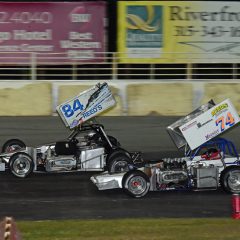 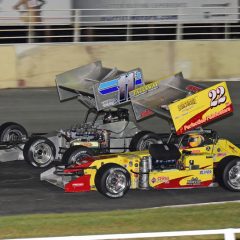 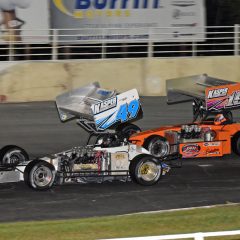 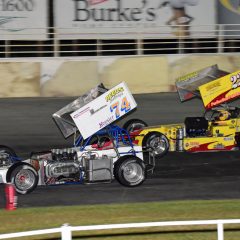 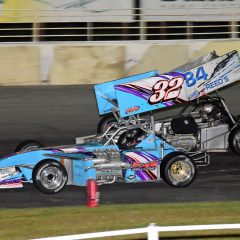 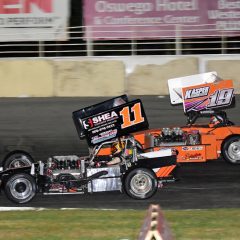 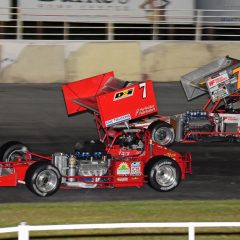 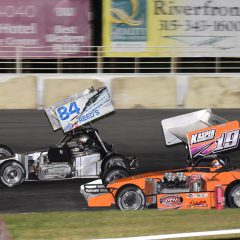 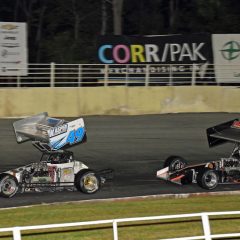 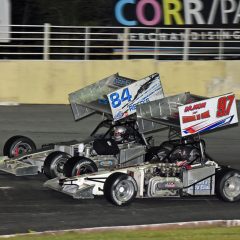 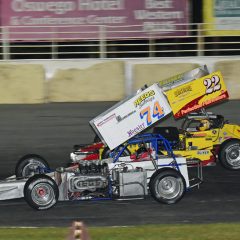 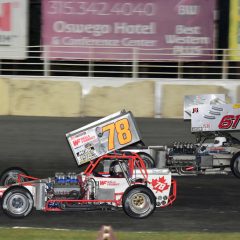 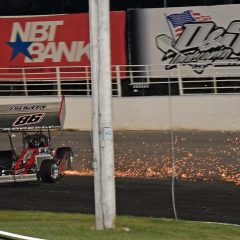 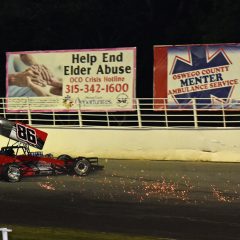 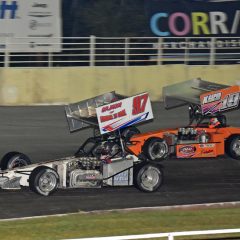 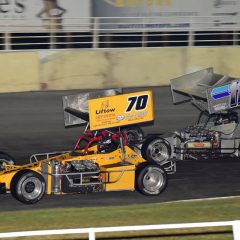 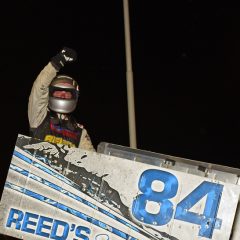 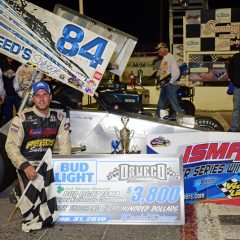 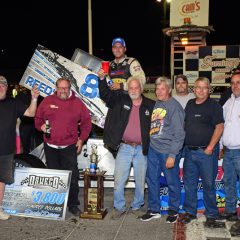 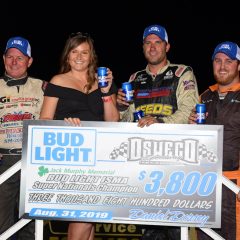 Timmy J took off in the lead on the second attempt to get the race going with Danny Shirey, Ryan Coniam, Dave Shullick and Ben Seitz the first five.

The Lane 97 began to build a lead as Shullick moved into second in the 49, pulling his teammate Trent Stephens into third. Chris Perley, who was no stranger to victory lane in competition at Oswego with nine winged and one non-winged supers win over the years, made it a trio behind Jedrzejek, leaving some equally formidable challengers in Coniam, Danny Shirey, Ben Seitz and Lichty a distance behind.

But the yellow halted the flow shortly thereafter on lap 11 when Shirey had motor problems in the 72 ending his race before really getting started.

Back underway, Jedrzejek made quick work at pulling away from the Shullick-Stephens-Perley trio, but another yellow was about to fall on lap 14, disrupting the race one more. The 66 of Lou LeVea Sr and the 70 of McKnight were tangled up in turn four. Facing a lengthy cleanup, red was called and refueling allowed during the interim. McKnight was able to pit for repair, LeVea was ofn.

On this restart, Jedrzejek took off and racing began to settle in. On lap 25, Perley had moved past Stephens and was hot on the tail of Shullick. Lichty, also had moved by Stephens with Seitz, Kyle Edwards, Coniam, Mike McVetta, Mike Ordway Jr., and AJ Lesiecki, McKnight and Sammut behind.

Three laps later, the red was brought out for the second time when over in turn two, Shullick and Perley had come together. A burst of flames emitted from the 49 but was quickly extinguished. Shullick’s 49 had incurred a hole in the fuel cell from a rubbing part allowing hot fuel to leak onto Shullick’s leg and cause the fire. In the subsequent sudden slowdown Perley’s 11 was collected. Both of the cars were considerably damaged and the night was over unfortunately for the talented duo.

Back underway once more, Jedrzejek now had Lichty and Stephens closing in and Lichty didn’t wait too long to grab the point from him.

As the race moved to lap 40, Jedrzejek was alone in second behind Lichty, with Ohioans Stephens and Edwards close together ahead of Ben Seitz, Ryan Coniam, McKnight, Sammut, Ordway Jr, Lesiecki and Nick Cappelli. The 22 of McVetta had headed to the pits with mechanical ills just prior to that.

On lap 44, just when things seemed to be settling in, Cappelli’s 86 was out of the action on the hook. Mike Ordway Jr. pulled the 61 in at this juncture as the attrition continued.

The field bunched up again on this green behind Lichty, but moments later, coming off turn four, Coniam and Seitz running in the top five, brushed with Coniam taking a scary ride along the front wall on his side, ending up in turn one. He was not injured, but the car was damaged.

Ryan, when later asked what happened, said succinctly, “It’s hard to tell. There are two sides the story. That’s all there is to it. Everybody is okay. That’s the way it goes sometimes.”

Ben’s take later on the incident was “He got under me and I don’t know if he got loose and just hooked right or we just ran out of room. He even said he had some wheel spin and I held my line.”

The following fifteen laps, after four red flags, thankfully went along quickly with Lichty in command, Jedrzejek and Stephens dicing for second and third, Seitz, Kyle Edwards, McKnight, Sammut and Lesiecki the remaining to cross under the checkers.

Seitz, who finished fourth commented after the race, “We had a decent race. The car was faster than it looked. We had some mechanical issues that kind of kept us from getting full potential, but Danny and the crew have been working hard. I’m pretty happy with it. If we could ever get a good clean run I think we’d so really well. The car is fast. It has speed we just need to get the mechanical gremlins under control. I’d like to thank the track. We have a long night tonight and we’ll try and race tomorrow.”

In fifth was 2018 ISMA champion Kyle Edwards who had a hauler breakdown on the way to the track and was picked up by Rich Reid, had a bad day go worse when called for jumping on lap 45, still managed a top five finish.

“We had a way better run and we had a car that was better than fifth place. We had a little struggle at the beginning and then there was some carnage there and we didn’t put on the best show we could have for the fans. But we’re in one piece and I feel that if the race director hadn’t called us for a jump that we definitely had a podium car. We’ll just go on to Star and try to get them there. I have to mention that we broke down on the way here and Rich Reed picked us up. We wouldn’t have been here without Rich and all the other guys like Bodnar, my Dad, and Level Performance.”