CHRIS PERLEY BACK IN VICTORY LANE AT OSWEGO IN ISMA OPENER 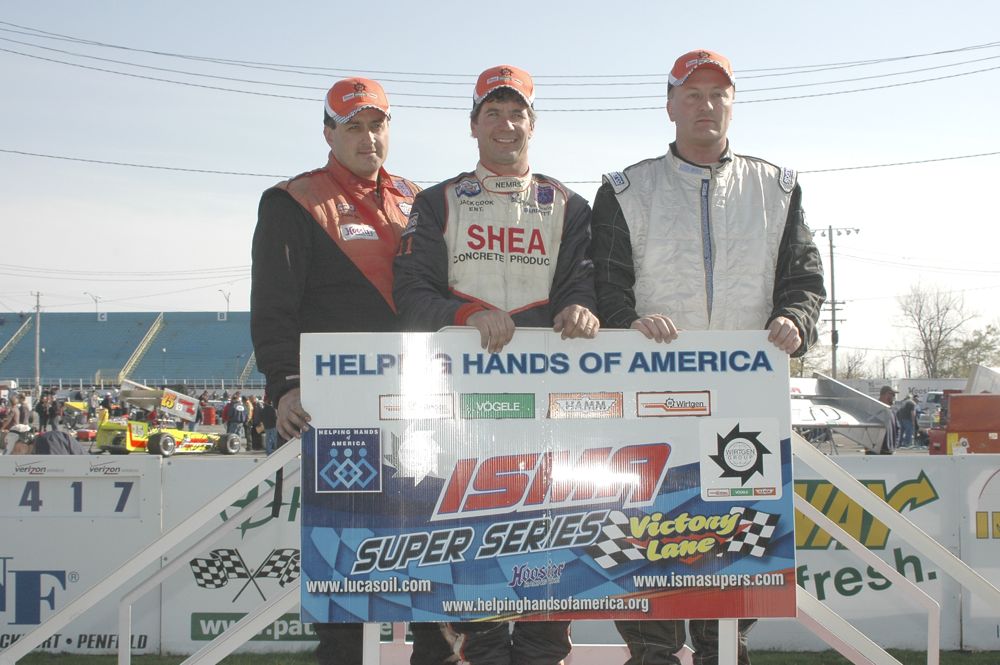 Oswego, NY – When Rowley, Mass driver Chris Perley burst onto the supermodified scene at Oswego Speedway it was in 1995 when he started a three-year string of Super Nationals wins that gained him recognition as a driver and his car owner almost $25,000. But, since that last win in 1997, Perley has had nothing but bad luck at the Big O. Sunday afternoon, however, Perley finally “came back” when he cruised by race leader Dave McKnight on lap nine of the Wirtgen-ISMA opener and easily went on to victory in the Gater Racing News-Parts Plus 50 lapper.

“Lady Luck was with us today I guess,” said Perley after his win. “We’ve had the car before but couldn’t pull out the win. I tried not to get too excited. The car warmed up pretty good. We were hoping that it was really good. I don’t know what happened to Louie and Nokie because I think it would have been the three of us up there battling hard. When Louie broke I thought I was gone. We went through there three-wide and I didn’t see him until the last second. I just squeezed through. Luckily he’s smart enough to move up. I don’t know what to say. Nine years later and I’m back. I guess it’s a new streak – one in a row.”

The guy finishing behind The Rowley Rocket was a surprise as a rare winged appearance for Ray Graham Jr. saw him a distant second to Perley in a strong run for the Iowa driver. His Hawk chassis number 90 ran in the top five for much of the race coming on strong as the laps wore down to take over second from Joe Petro. Ray credited his second place to car builder Joey Hawksby. “Joey made some changes on the rear of the car – it was bottoming out. We moved the wing around a little bit. Even though the car had a slight push, it stayed consistent all day. You can’t really ask for much more than that.”

Third place driver Joe Petro, continued his forward mobility from last season with another strong run. “The car was fast from lap one. Basically it was the same setup that we brought in last year. We made a pretty basic change yesterday and we were worried we may have ruined the setup because it was so good. But it was definitely the right thing to do.”

Twenty-five winged ISMA supers hit the asphalt for the first time this season with Joe Petro leading lap one of the first feature-go. Dave McKnight stormed by Joe one lap later to take the point but moving quickly up from his tenth place spot was Chris Perley. On lap nine Perley put the number 11 in the lead, a spot he would not relinquish.

The fastest clocked car of the two days at Oswego was Nokie Fornoro who was just a tick faster than Perley. Fornoro never got to show his speed, however, as he brought out the first race yellow when a rear panhard bar broke on lap 13, taking the axle with it. Ironically, the other potential threat to Perley’s speed was Lou Cicconi who pitted just prior to Fornoro due to a center breaking out of his right front wheel. Unlike Fornoro, Cicconi was able to return to the fray.

Perley led the way on the green and pulled away from McKnight, Petro, Justin Belfiore and Graham. On lap 16 a slowdown came for the 7 of Charlie Schultz, driving the May Motorsports 7. It was green-yellow moments after Schultz got straightened around, with the three cars of Joe Miller, Bobby Haynes and Larry Lehnert involved in an incident in between three and four. None of this trio was able to continue.

A long green fell over the race as Perley began to leave the others behind. McKnight stayed in second as Petro and Graham began to pressure him. Justin Belfiore, Mark Sammut and Bobby Magner raced behind Graham.

Just as Perley was about to start lapping the tail of the field, another yellow fell on lap 27 which saw Greg Furlong and Magner pitting.

This was the last stop in the race and the last time anyone got close to the Vic Miller-owned 11. With fifteen to go, McKnight’s motor began to falter and Petro, Graham and soon Belfiore, passed by. Unfortunately for the luckless Belfiore, his 8 slowed eight laps from the checkered, due to lack of fuel. “Would you believe it?” Justin said later, “I ran out of fuel. We just didn’t put in enough.”

Perley was well in command with five to go, when Graham and Petro finally shook off the lap cars and tried to move in on Chris but he was already headed for victory. McKnight was back in fourth and fellow Canadians Mark Sammut and Mike Lichty crossed under the flags behind him. Kyle Carpenter fell into seventh, Floridian Doug Heveron was eighth, Dave Trytek ninth and Bob Bond tenth.

The Wirtgen-ISMA crew are off until May 27th’s return to Waterford Speedbowl in Connecticut.