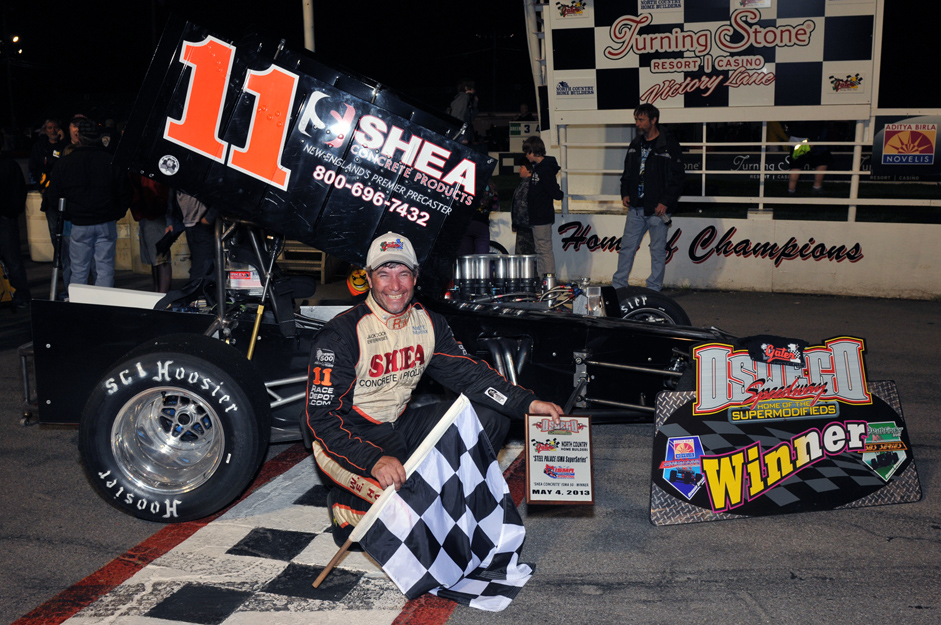 Oswego, NY – Chris Perley made a triumphant return to Oswego Speedway victory lane Saturday night but it was not entirely a joyous one. On Thursday, May 2nd, ISMA and the area-racing world lost a legend and a great friend when Irish Jack Murphy died. In his honor the ISMA season opener was lengthened to 56 laps as a tribute to the famed driver who drove the Shamrock 6. Murphy had been an integral part of ISMA since its inception. For Perley, it was an eighth win at Oswego keeping him atop the all-time winged win list since 1992.

Said Perley in victory lane, “. I just want to dedicate this race and I’m sure everyone does, to Jack Murphy. He was such a part of ISMA for all these years. Since I was a pup he’s been running around here and you could never make him quit. He was so dedicated. He and Delores are such a part of this organization. I’m really going to miss him. I spent a lot of time talking with him over the years. I don’t think there is anybody here that can say anything bad about him. He’ll really be missed. Our hearts go out to Delores and the family.

Describing his race and return after a year off, he said, “I wasn’t sure this new car was a 50 lap car let alone a 56 lap car, but I’m liking it better and better. We took a long time building it. After the heat I was happy but in the feature I took off a little too early and I got loose. I slowed up a little but Louie was creeping up. I hoped Mark Sammut could hold him back a little longer but he didn’t.

“I want to thank the Torrese brothers for having us. I love coming here. I love racing Oswego. I missed the place last year and I’m kind of glad to be back. Sanity brought me back to racing. You can only take so long not racing after you’ve been doing it for so long. I have a great crew and a great car owner. These guys are a blast and I could never leave them alone for too long. You can’t wreck a good thing. I’m lucky to have a teammate like Louie this year. I think we’re going to see some big things. I think Louie is going to be tough at most of the places. I got lucky and got out early tonight. I took advantage of my start and won this one.”

Cicconi, who had set a new track winged supermodified record earlier in the day, looked very comfortable in the Miller 71. Starting ninth, he worked his way up to second with 20 to go and tried to hunt down Perley. A late race red saw a couple lap cars between the 71 and the 11 with Perley pulling away before Cicconi got too close. Lou also paid tribute to Murphy and to his new car owner and team.

Canadian Mark Sammut led the early going but Perley got by half a dozen cars to catch and pass Mark before lap 10. Sammut was pleased none-the-less with his finish.  “To run good on a night named after Jack and to finish on the podium means a lot. We worked a lot harder on the new car than we did on this one and it’s still not done. So we spent about a month on this one going all over it. To come out of the box and to have it run like that is great. We’re happy and we’ll take third running behind Chris and Lou anytime.”

The restored Shamrock 6 was driven between the starting field by Jack’s daughter Lori to honor the fallen legend prior to the start of the 56-lapper.

Lap ten saw another yellow and when the green dropped again, the Rowley Rocket was up front and soon out of sight of his nearest challenger Sammut.

By lap 25, what would have ordinarily been halfway, Perley was lapping cars, as Sammut, Graham, Timmy J, Cicconi and Lichty were the top gunners behind.

Yellow fell two laps later when Tim Ice met the foam and was hooked out of competition. Timmy J, with front nose wing dragging, chose to pit out of fourth to get a nose job putting him to the rear.

The new, basically untested 11, was moving flawlessly away at each restart while Sammut, Cicconi, Lichty and Graham raced ahead of Ryan Coniam, Dan Lane, Bob Dawson, Jon McKennedy, Eddie Witkum and Bob Magner.

Yellows came on lap 35 and one lap later for Dan Bowes and then Coniam, while Mike Lichty pulled pit side with a broken heim. Said the 2012 ISMA champ, “The car kept toeing in and we kept loosing camber in the tire. That’s not good. You can’t race like that.”

Cicconi made use of the restart to get by Sammut for second, but Perley just cruising as he had so many times in the past. Cicconi got one last chance just into lap 47 when the 97 of Lane slowed dropping oil on the track as he tried to exit. Red was dropped for the cleanup.

Just 13 cars took the final green with Perley flying away unimpeded to the checkered. Cicconi, Sammut, Graham and Bob Dawson finished up the top five with Timmy J, winner of the 2012 Super Nationals, working on Dawson at the end.

Ray Graham was pleased with his initial 61 run and a fourth. “I’m very happy for the first time in the car. I think Clyde made some changes over the winter so this was really the first run for the car in that configuration and our first run together. You always like to win but a top five racing against these guys is always good. We have something to work with and we’ll come back next time.”

Timmy J commented later on his mishap and run back to a sixth. “I was coming up on a lap car and thought he’d stay high, but he didn’t and I tapped him. It knocked the right front nose wing off and it got stuck under the car. I could hear it under the caution and I saw they were looking at me out there. I got a chance to go to the pits and when I came in the crew was ready to go. These guys have worked tirelessly since all week getting this car ready after that Thompson crash. It’s not quite 100 percent yet but it was good enough tonight. We’ve got some finishing touches to do on it before the next race. I just can’t say enough about all their hard work to get it back to here. All in all, we came back to sixth and we’re pretty pleased.”