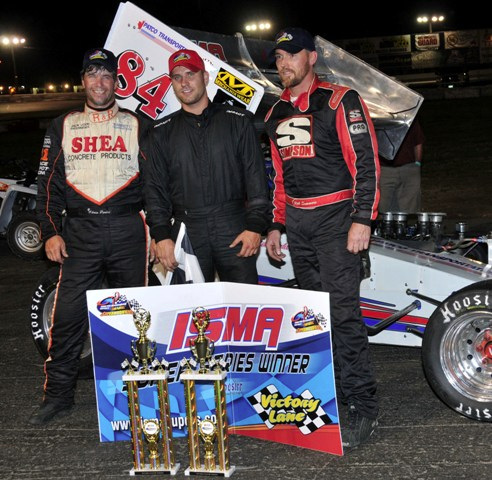 Waterford, CT – Canadian Mike Lichty is no stranger to victory lane by any means, but when it came to winning an ISMA supermodified event, he has been stymied each time he appeared to be headed for victory lane. The chances were many over the seven-year career but always something happened to prevent the 23-year old from notching that first big one. The spoiler on many occasions was Chris Perley. Saturday night at Waterford Speedway began to look like a sequel, but the ending this time was different. Lichty, starting eighth on the field, worked his way up behind race leader Bob Magner by lap 15, and on lap 21 darted by the 41 for the lead. Within 10 laps, however, Perley had put his 11 into second and the duel began. But, this night, it all came together for Lichty and Perley would stand on the podium, outside the new winner.

Lichty had a smile of relief on his face in victory lane. “Finally, we were able to pull it off. I want to thank everyone on the crew for how much work they put into this deal. Earlier today we broke a rear end and had to replace it. We didn’t have any practice. We came blind into the heat race and finished second. When we came into the feature, the car was good. I think we got into Belfiore a bit and I apologize for that. When I saw on the lapboard that Perley was there, I said ‘man not again’. 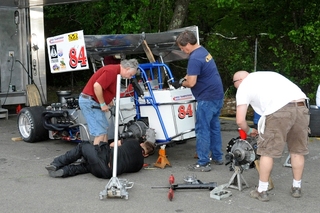 “I always felt we’d get this win and honestly I was disappointed that I didn’t get it earlier. But we have changed a lot of things and you ISMA is no slouch. There are a lot of good cars racing with us – probably 10 or 12 – every time out that can win. I’d really like to thank my mother and father and everybody on the crew who work so hard throughout the year; and Paul MacNamara from Stage Door Transportation. I also want to thank everyone at Waterford for coming out to see us.”

Perley, who tried several outside moves on Lichty as the race wore down, was almost as relieved that Mike had prevailed.  “It took a long time to get started tonight. I mean I had a pretty good race and I stayed out of the shrapnel I guess. It was fun. I thought I had a pretty good car and we did. We were able to kind of catch Michael a little but he had a really good car too. Although I’m running a somewhat limited schedule this year, I’m happy that I was here tonight and to have Mike beat me fair and square. I gave him a run. We had a blast racing with him as I always do. I’m really happy to see him win and I was happy to bring home a second. Unfortunately, our other car looks like it ‘s a little nicked up. Hey, the R&R Machine, Vic Miller, Shea Concrete machine really ran great tonight.”

Rob Summers won the battle for third behind the two front-runners in his first outing in the Holbrook 35. Summers said of his podium finish,  “I can’t thank Jeff Holbrook and his whole JWJ racing team, Brian Allegresso, Butch Valley and New England Motor Racing Supply for giving me the opportunity. This is an awesome race car and they are a bunch of great guys to work with. I’m looking forward to learning a lot with these guys.”

A rain delay and a full moon might have been a forecast of unfortunate things to come for the winged ISMA supers. Before the green flew on the 50-lapper, yellow flew for the 17 of Ben Seitz who lost a brake line. The field jumbled up front and Mark Sammut’s 78 was against the wall in one while Vern Romanoski braked to avoid. Hooks came out for Seitz and Sammut.  The 2 of Eric Emhoff pulled pit side as did Dave Duggan and Larry Lehnert. Romanoski restarted in his original starting position with Duggan going tail.

Eddie Witkum Jr. took up the early lead when things got started but relinquished it to Bob Magner in the Holbrook 41. Magner pulled away quickly with Witkum soon challenged by Mike Lichty for second. Danny Lane and Summers closed in for the top five.

Lichty moved into second by lap 15 when one lap later the yellow flew for the Dave Shullick Jr who slowed with motor problems. Vern Romanoski pitted at this juncture as Shullick was towed off.

Back under way, Lichty was now glued to the 41 but only a few laps were in the book before yellow flew for the 98 of Justin Belfiore who was forced into the front wall byan attempted outside pass by Mike Ordway Sr., damaging the 98 heavily.  Justin commented later after talking with Mike. “Mike thought he had enough room on the outside, but he didn’t end up having enough room. By the time he lifted it was kind of too late. I’ve been racing a long enough time to know if you are faster than me, you will get the spot. There is no reason to make the move down the straightaway. And Mike kind of agreed. Hopefully we won’t have any more incidents. Really, it was no one’s fault; just people racing hard.”

This restart gave Lichty the opportunity to size up Magner to make a pass and that he did on lap 21 just off the second turn.  But, with the full moon rising, yellow flew this time for the 10 of Lou Cicconi who, after a brush with another car, was planted into the fourth turn wall.

Lichty was off like a shot again on the green leaving Magner to contend with Summers, Perley, Ordway Sr., Russ Wood, Witkum and Locke. With less than 20 laps to go, Lichty had his sites on the victory, but past experiences did not guarantee him the win. And, he would have to survive a couple more damaging yellows.

On lap 44, red dropped immediately as the 44 of Bobby Haynes went up in flames on the backstretch. Said Haynes, “I heard a knock coming out of one. I lifted to shut it down and as soon as I lifted, it just blew out the base on the motor.”

Refueling was allowed while the cleanup ensued. Thirteen cars remained of the original 23-car starting field. And, on the restart, Lichty’s nemesis Perley now was right behind the 84. Magner, Ordway Sr., Summers and Wood trailed.

One more flag flew on lap 42 to set up a Lichty-Perley shootout. It was for the 1 of Ordway Sr. who hit hard in the first turn wall. Going to the infield at the same time was early leader Magner, taking out the third and fourth place cars.

Perley made several outside attempts at Lichty after the cleanup, but couldn’t get by the determined Lichty. Victory came quickly in the remaining eight laps with Perley settling in for second. Rob Summers, Russ Wood and Danny Lane crossed under the checkers to complete the top five.

Said Wood, who had followed his teammate over the line, “I actually had a good car. I just couldn’t get my rhythm going. I picked the grooves and I fell back. I worked my way back up and missed three or four big wrecks there. I saw those happen. A couple guys were out of control out there tonight. Luckily we got through it all. We survived and were there at the end. Fourth, right behind my new teammate Rob. He had a good race. We’ll take it. The cars are all in one piece and now we’ll head to Stafford.”

Danny Lane, who piloted and survived his way into fifth, was happy with the spot. “My first top five this year. I don’t know how it happened. We were just hanging on and fighting. They started dropping off me and crashing in front of me. I was lucky to pick up that one last spot at the end there for a top five. It was good. I tried to stay out of trouble.  I’d just like to thank the guys on the crew. Those guys work hard on the cars all year and we haven’t been getting the best results. I was really trying to fight through it and not get discouraged because the car wasn’t the best. It worked out good.”