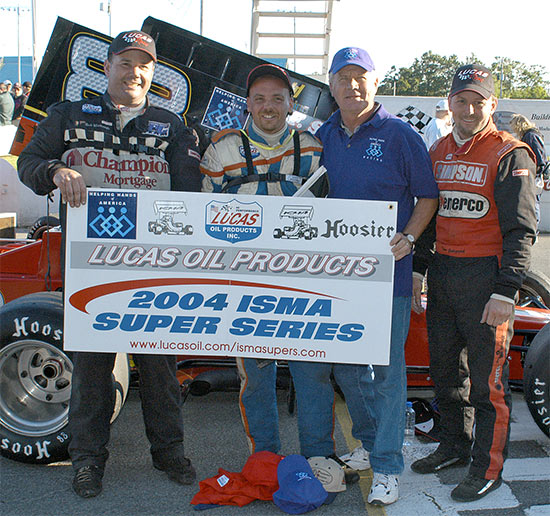 Oswego, NY – For the second straight night, the ISMA traveling series recorded a first-time feature winner when John Payne took the Budnick 88 from outside pole to victory lane. Justin Belfiore had done it the night before in Canada. Payne, of Vernon, NJ, recorded his career-first supermodified victory in the ISMA Lucas Oil/Helping Hands series with his only challenge coming from a high-flying Timmy Jedrzejek who had recorded some torrid times on his way to a heat win earlier in the day. Payne only had to survive two short cautions on his way to the checkered and the $3,200 check. And, because of the previous night’s disappointing run, Payne had considered not even coming to Oswego. The win left the normally loquacious seven-year supermodified veteran, speechless as the thunder of applause came from all around.

“Thank you so much. I love this racetrack. It’s so great to be winning here in front of so many great people. I mean I treat this place like it’s my own. I’ve been coming here for the last six years. I’ve had nothing but bad luck. We had a terrible weekend. I was about ready to go down to Wall and run the modified last night but I said ‘know what let’s just give it one more shot’. I don’t know what else to say. Bruce gave me a great car. My guys worked hard. We’ve been fighting a push for the last three shows. It’s a brand new car. To come here the third show out and win with it is … I don’t know what to say. I’m speechless. But I do know there will be one heck of a party tonight!”

Second place runner Timmy Jedrzejek was all smiles after his second place run. “It was a great run for our team. The whole May Motorsports Enerco/Mr. Heater team did their job today. We just ran out of tire there at the end chasing Johnny down. He was like a rabbit out there. I was hoping he maybe would burn his stuff up a little bit but he lasted longer than we did and we didn’t have anything more for him the last six laps. Johnny got bogged down a little in traffic and I thought I had a shot. I got right up to him but when he got by I got held up just as much as he did and he gapped me again. With the caution with six to go I thought that was my chance but I couldn’t get close to him.”

Ricky Wentworth who had probably was his best finish to date in his short ISMA career said; “This was an awesome night, much better than last night. This is incredible. I love this place. This has got to be my favorite track forever. We won the heat here last year and we were hoping to have a good finish. Tonight the car was perfect. Chris (Perley) and his guys set it up and it was incredible. “

Wentworth and Payne led the front row of the 25-car winged field down to green for the first half of the Jim Shampine Memorial racing at Oswego, and Payne was off like a shot. By lap 11 he was knocking on the back door of the field and then inserting lap cars in between his 88 and second place runner Wentworth. Wentworth had to easy task of it as Timmy Jedrzejek, Mark Sammut, Joe Gosek, Randy Ritskes, Lou Cicconi, Russ Wood, Pat Abold, Dave McKnight, Chris Perley and more were right there waiting to get by.

The first of two yellows flew on lap 27 when Jamie Timmons hit the inner hub rail. The field slowed to cruise and the challengers looked hungrily at Payne. But John still had an ace with a lapped car as cushion behind him and he used the time to flee the onslaught. In the meantime, Timmy J, who was not stranger to Oswego victory lane, was pressuring Wentworth for the second place spot. A classic battle was waging behind as Sammut made his 78 as wide as possible holding back some of supermodified’s best.

Just before halfway, Wentworth lost his spot to Jedrzejek but Timmy had a long way before he could catch Payne who was on a mission to win his first. The talented driver who earned his wings in the midget ranks, was not to let the big one get away.

Mark Sammut, who was driving with a sore pedal foot after his own car had run over it, was doing quite nicely holding back the pack. Gosek, driving the Lane 9 ran fourth ahead of teammate Randy Ritskes as Dave McKnight, Lou Cicconi, Nokie Fornoro, Wood and Perley still couldn’t find moving up room.

With fifteen to go, Payne’s lead margin began to dwindle as more and more lap cars loomed in front and Timmy J loomed now closer and closer behind. With ten to go, Payne broke away from the lap cars while Jedrzejek got pinned momentarily. Only a caution now would hinder Payne’s potential win. And it came on lap 43 unfortunately for him, but setting up an exciting finish for the huge crowd on hand.

Dave McKnight’s 94 had come around to cause that last caution and into the pits he went with an overheating 94. “Liquid Lou” Cicconi was stopped out front in the interim and was found to be leaking gear oil and he too was relegated to the pits.

The shoot out was set now as Timmy J was clipped to Payne’s tail. One lap car separated the 7 from the rest as Wentworth still held third and Sammut fourth. Gosek, Ritskes and now Perley, who had moved steadily forward, were now top six. Perley and Fornoro swapped spots twice in the next couple laps as Payne charged onto victory.

Timmy J could not stop the 34-year old driver ahead of him and was just as pleased to settle into second. Wentworth came home third in a great run for the 2003 co-Rookie of the Year in ISMA. Garnering his third top five in as many races was 2003 ISMA Champ Chris Perley. The 2003 champion Perley commented on his consistency. “Another top five. Yeeha. I mean I’d much rather have the win but we were a late bloomer again. We keep getting stuck with these 75 lap cars. The track for some reason today was greasy. Nobody could go to the outside. They were all hugging to the bottom. I think you can run to the outside more at night here. The car came in at the end. Luckily we had that caution at the end to regroup and pick off a couple people. Congratulations to Johnny Payne, Timmy J and Ricky. Johnny and Ricky really needed those finishes. It keeps them pumped up in ISMA. It’s great to have two new winners. I mean, I want to win – everybody wants to win – but to see two new people in one-weekend shows that everybody has a shot. It’s great for the division.”

And, with his best finish ever, Mark Sammut’s aching foot did not seem to matter. “It was great that we finished fifth but the car was not as good as it looked. I thought we were going to be in trouble at the start of the race. We were really tight. I drove it along and it kept getting better and better. Nobody got up to us. Perley got us on the last lap but what can you do. He’s probably the best car here. We’ll take fifth anytime in this class. We’ve never finished fifth before. We’re coming. We’ll keep playing with these and that and trying things. The car’s been pretty reasonable all year, so we’ll keep trying.”

Rounding out the top five in what was also a good run for that team was Mark Sammut. Fornoro, Ritskes, Abold, Martel and Gosek finished up the top ten.

ISMA is headed west next when they travel to Toledo Speedway for a Friday, June 18 50 lapper and then back to Sandusky Speedway for a June 19 75 lapper.