Russ Wood Wins A Wild One At Waterford ISMA Opener 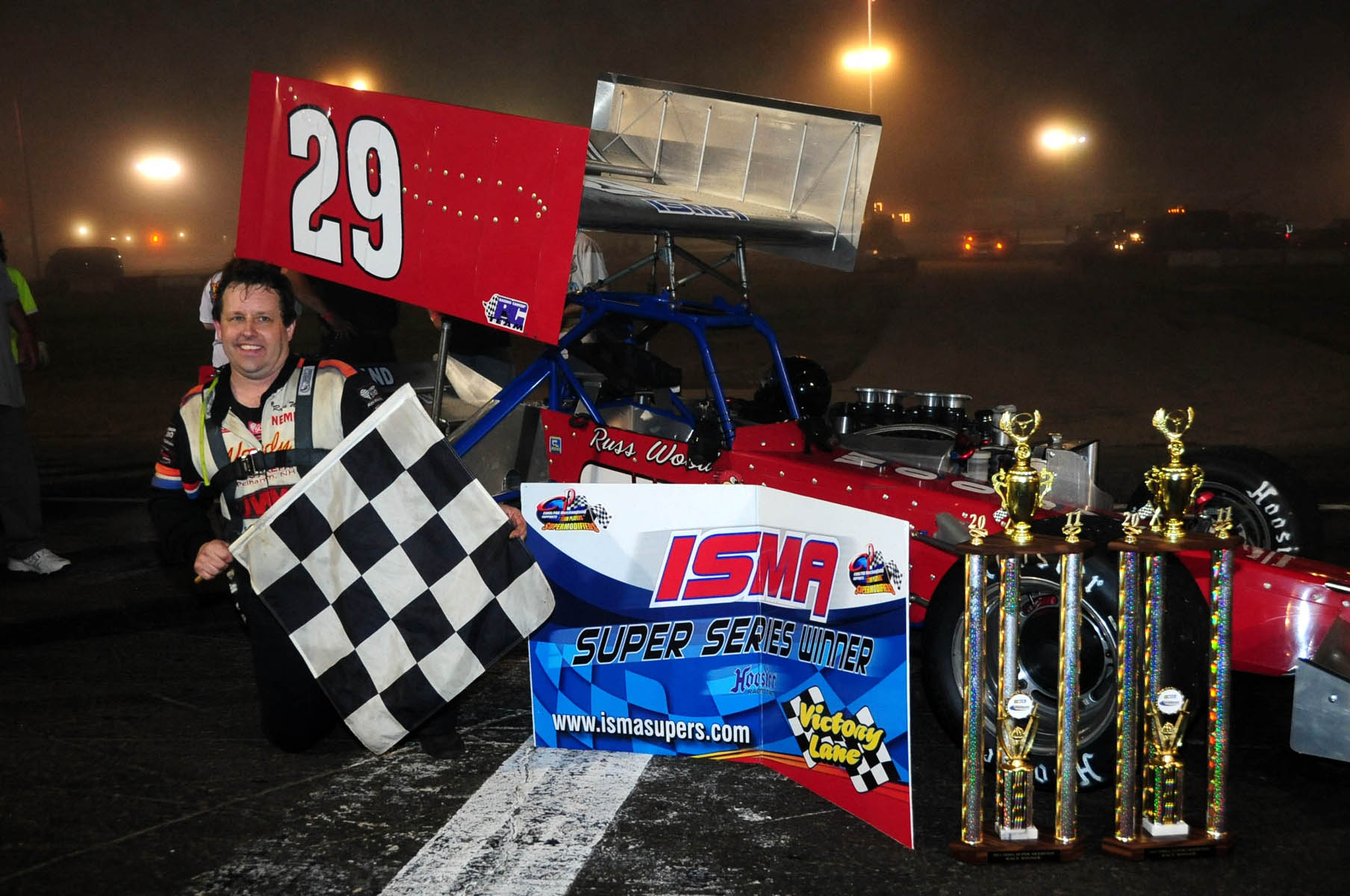 Waterford, CT – “It’s a win, we’ll take it,” said seven time ISMA Champion Russ Wood, as he peered through the dense fog to the crowd, with an apology and a shrug of the shoulders for a rough night of racing on Memorial Day Weekend at the Waterford Speedbowl. Ben Seitz from Bourne MA, looked like he was going to be the clear cut winner, until a tangle with lap traffic ended his march to victory. The race would not be restarted after this lap 47 caution, as heavy fog moved onto the speedway making racing impossible. When the checkered flags flew mercifully the race was three laps shy of the scheduled 50 laps. Russ Wood ended up in the top spot without ever leading a green flag lap. Chris Perley was second, with Johnny Benson Jr third.

On a night that barely made it past the half-way point before being stopped by 2 red flags, Wood stated, “It was a bad race. Sorry about that fans, nothing we can do about it now, I couldn’t see nothing out there. That last yellow I thought I was still second, I don’t know what happened to the 17. It’s a win, we’ll take it. I would like to thank Jeff Holbrook and Brian Allegresso for a great car and working hard all year and the track for having us.”

“No I can’t see a thing out there, I didn’t see a thing. It was an interesting night, it must be a full moon up above the fog somewhere. I guess I’m happy to come home top 3- too bad for Ben it looked like he had us covered. I’m not sure what happened out there but it was tough to see at the end, it was a tough one and it’s over.”, said second place finisher Chris Perley. Perley overcame a lap 1 accident to finish second to Wood.

“It’s a little bit crazy I know it’s the first race for everyone, you got to do a little give and take for sure, you know the supermodifieds always put on a great race and with this being the first race of the season it could of went a lot better- hopefully what the fans did see was good.”, said former NASCAR Truck Series Champion Johnny Benson Jr. Third place finisher Benson kept his nose clean all night and brought the car home without a scratch on it.

The start of the 50 lap grind was a sign of things to come at the Waterford Speedbowl. The initial start did not make it past the first turn as Jamie Timmons, Chris Perley, Eric Lewis, Paul White and Timmy Jedrzejek were involved in a multicar incident in turn one. As the cars came to a halt in turn one, an enraged Jamie Timmons jumped out of his driver’s seat and onto the race track. While under caution Timmons purposely darted in front of several pacing supers nearly getting hit as he tried to find a particular driver. All cars besides the 28, belonging to Lewis, would return to the race.

The second restart would not fare much better as the 02 of Brandon Bellinger and the 98 of Justin Belfiore would come together and end up in the turn one wall. Belfiores’ 98 car was able to continue, but this would mark the end of Bellinger’s night- as he saw a heat race incident earlier in the day.

With 0 laps completed the third restart would see pole sitter Eddie Witkum Jr jump out front with an early lead. With only 7 laps in the books Dave Duggan looped his number 51 super on the front straightaway to bring out the caution. Duggan, who struggled with motor issues all day, would retire from the event.

Lap 8 saw perhaps the scariest incident of the day as the rookie Dan Bowes and veteran racer Timmy Jedrzejek came together in turn 2. The incident planted Jedrzejek into the turn 2 wall hard as the car suffered major damages and was finished for the night. Bowes would attempt to restart the race after the red, but pulled pit side shortly after and would not return.

The lap 8 restart would see a single file start as hard charging Mike Lichty was on the move. Lichty rapidly picked off the top running cars and would land in the top spot on lap 10. It did not take long for the 17 of Seitz to move into the number two spot and set his sights on Lichty. While the battle for the lead was shaping up, six time ISMA Champion Chris Perley in the Vic Miller 11 was moving up quickly through the field, after restarting the race from the rear, after the lap 1 incident.

Around lap 23 a thick fog started to roll onto the Speebowl. At the same time a fierce battle between Johnny Benson and Chris Perley ensued. As the laps ticked off Perley would obtain the third place spot from former NASCAR Truck Series and Grand National Champion Johnny Benson Jr. A problem with the 66 of Chris deRitis would once again slow the field on lap 25. Rookie driver deRitis slowed and came to a stop on the outside of turn four. deRitis would make a pit stop and rejoin the field. Timmons would retire from the event at this time.

When the green flag waived for the restart, they did not complete a lap before the yellow fell once more for race leader Mike Lichty. The 84 super would come to a rest on the back straightaway with a flat tire. Lichty would return to the race. At this time a dense fog had set over the Speedbowl.

Only one circuit would be completed when the second red flag of the event waived for a spectacular crash between Rob Summers and Justin Belfiore on lap 26. Summers super jolted into the air landing on top of Belfiore’s car, as they came together on the front straightaway. Although the incident was horrific, both drivers emerged from the wreckage unharmed.

After a lengthy caution the fog on the Speedbowl grew more and more dense. Current leader Ben Seitz gave the thumbs up to continue racing and so the race went on. As the green flag dropped it would be the final march to the finish. The battle for the number two spot heated up as Russ Wood gained the advantage over Chris Perley. On lap 44 leader Seitz encountered heavy lap traffic and would eventually end up tangling with the lap car of Jeff Locke on lap 47. Seitz would suffer significant right front damage which eliminated him from the event. The race would not be restarted as more heavy fog moved onto the Speedbowl making racing impossible. When the checkered flags finally waived the race was cut three laps short of the originally scheduled 50 laps. It was Russ Wood finishing in the top spot followed by Chris Perley and Johnny Benson Jr.

The next stop on the 2011 ISMA tour will be June 28th for Xtreme Tuesday at Stafford Motor Speedway.

– Ted Christopher set fast time in practice, driving a brand new Clyde Booth Supermodified. Christopher was leading his heat when he was involved in an accident as lap cars Eric Emhoff and Dave Duggan got together in front of him on lap 9. Christopher tried to avoid the wreck but suffered right front damage when he hit the wall. The damage was not repairable for the feature event.