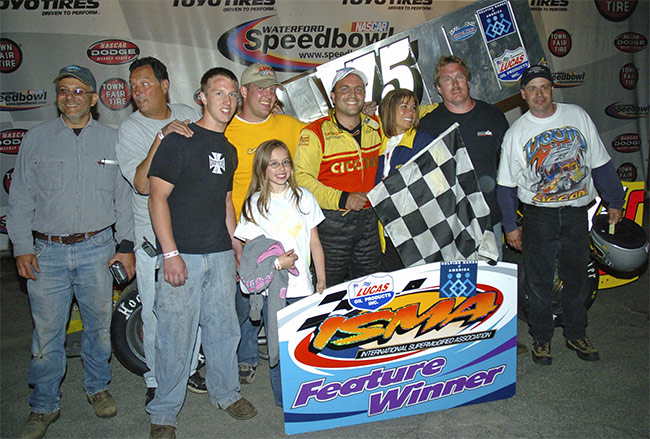 Waterford, CT – “Liquid” Lou Cicconi started in fourth place for the ISMA Lucas Oil-Helping Hands of America opener on Saturday night at Waterford Speedbowl and it was just far enough up to be clear of a green flag lap multi-car crash that involved six cars including 2004 champ Chris Perley. After the clean-up, Cicconi powered his basically new 75 past Randy Ritskes in the Budnick 88 after one circuit and took off to victory lane pretty much unchallenged. Lou was more than pleased with the performance of the car, which brought him to his first ISMA win since 2002.

Cicconi said after the 50-lap victory, ” We changed the car and just hit the right set up and went on from there. Toward the end I thought I was losing tire and thought I’d burned them up, but the tires were good it must have been the rain. We’ll take this win gladly.”

Lou’s only real challenge came from a charging Pat Abold who came up from ninth place to pass by second place runner Randy Ritskes at the halfway mark. Abold was also happy with the 26 car, which also was rebuilt over the winter from the old 29 his teammate Russ Wood drove. “This was a good run for us and the first time in this car. It feels like I’m starting all over again, but this car certainly has history. I felt comfortable in it and I’m looking forward to a great year and to Toledo and Jennerstown in June.”

Randy Ritskes had anything but a regular day. His car owner Bruce Budnick was taken to the hospital late in the afternoon with what was thought to be a heart attack. It was decided to still run the 88 with the offered assistance of many of the ISMA contingent. The attack turned out to be a reaction to some new medicine and Budnick returned to the speedway in time to see his car run second for half the race before falling to Abold’s pass. Third was fine. “My car owner faked a heart attack to get out of the work,” kidded Ritskes after his strong finish. “He has us all nervous. We tried to set the car up ourselves but we needed Bruce. We set it up a little too tight. The track certainly didn’t loosen up as much as we thought it would. We’re happy to get third.”

The supers hit the Speedbowl running with the new transponder system recording some fewer than 13-second laps. Jon McKennedy had the fastest time at a 12.2 in his heat win which was well past the old track record of 13.3 With the possibility of another rain shower, the supers took to the grid second anxious to get started. Unfortunately as the cars entered the third turn on the green flag lap, mayhem ensued. Scott Martel, driving the Lane 97, braked hard to avoid Jon Gambit’s sliding car and had the a-frame break sending a front tire flying into the infield. Caught up in the accident were all the cars around him including Chris Perley, Dave McKnight, Jon Gambuti, Mark Sammut and Johnny Payne. Payne’s 67 looked to have incurred the most damage with Perley joining him on the hook. Gambuti and Sammut were pushed away. Dave McKnight re-entered the fray, but would leave before race end.

The race resumed with Ritskes leading one lap before Cicconi stormed by. Joe Petro in his new car numbered 33, Jon McKennedy and Abold were the early top five. Misfortune hit the Dunigan team when McKennedy brushed tires with Justin Belfiore causing the 79 to spin and collect team mate Russ Wood. Both cars received the hook treatment.

Back underway Cicconi was the class of the field with Ritskes a distance back while Petro and Abold fought for third. Belfiore maintained fifth chased by Nokie Fornoro, and Joey Payne. Abold finally got by Ritskes on lap 25 and was able to close up on Cicconi on several occasions in traffic. It was clear sailing for Lou to the checkered as no yellows flew to impede his progress. Abold settled in for second, as did Ritskes for third. Having his best finish in recent memory was Joe Petro with Justin Belfiore in a great run for fifth.

“It felt great out there. This car performed just the way we wanted it to. No complaints! Zero. Said Petro after the race. ‘It scared me a little when I said ‘no excuses’ in that interview recently. I read it and said, ‘Here we go. No excuses now.'”

Belfiore, who had his first ISMA win in 2004, was more than happy to start the season with a fifth. “I had a good run,” said the Ipswich driver. “The car is coming around and my luck held out for a change.”

The next ISMA trip finds the winged supers in Toledo (June 17) and Jennerstown (June 18).