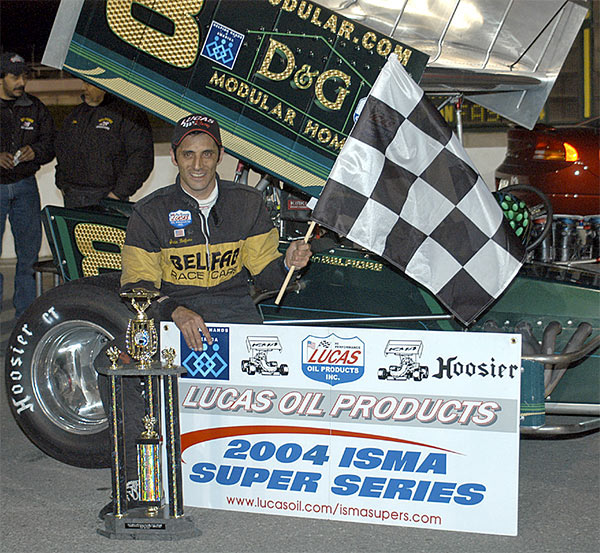 Fraserville, Ont. Haverhill, Mass.’s Justin Belfiore lost a motor at Kawartha Speedway’s ISMA event on Friday night, but he didn’t care all that much because that motor had gotten him to his first-ever victory lane in the ISMA Lucas Oil-Helping Hands America super series. Belfiore snuck up on a high-flying Lou Cicconi in traffic and with 15 laps to go, dove under him for the lead. Cicconi, who had slowed a little from his early half-track lead, now lost sight of Belfiore until two short cautions within the last ten laps gave the yellow 75 a few more chances. It was just after the victory lane ceremonies that Belfiore admitted that he thought the motor had expired on his number 8.But the excitement of his career-first took precedence in the emotion department. The win was worth $3,200 to the 34-year old driver in his twelfth supermodified season.

“This actually hasn’t sunk in yet,” said Justin, “This has been coming for a long time. I’m so grateful we got it all together tonight. This was my first time her and I can’t wait to come back. I think Lou’s car was starting to go away there when I passed him. He was really fast at the beginning and I couldn’t even run with him. Lou gave me plenty of room and kind of left the door open on the inside and I managed to get him. This track reminds me a lot of Lee Speedway where I grew up racing and Southern National or Wall. I kind of like these kind of tracks. We always seem to get around well. This is a brand new car this season. This is basically the first full feature it had run. We had trouble at Wall and got rained out at Seekonk. If we can just keep it reliable now and have runs like this we’ll be okay. The motor is gone though. I lost water toward the end. It’s the old Eddie Bellinger motor refreshened. It still had the power, but we’ve been trying to get the new R&R in but just haven’t had time.”

Lou Cicconi, who had problems earlier in the day, was satisfied with second, “We did a good job. The car was slowing as the race went on. I thought we did good considering. We got second and we’ve been competitive each time the car has been out so far. If we continue to get better we’ll be there.”

Chris Perley, who came from nowhere to finish third, commented, “I had a 75 lap car in a 50 lap race. We were good. Nobody could pass really. I started way back and had to pick my way up through. It just takes me a little longer. We would have been there at the end if it were a different length race. But, hey hats off to Justin. He’s been knocking on the door for a long time. Good job to Louie. He had some problems earlier which he got repaired obviously.”

Pat Abold said of his fourth place finish “It was a pretty good run. We had a little too much stagger in the car and it was a little bit loose getting off. All in all we finished the race in the top five and that’s what we need to do to run consistent all year and challenge for the points so I’m happy.”

Randy Ritskes who was in the Lane 97 with Joe Gosek as teammate in the Lane 9, commented on fifth. “I am happy with a top five. The car was good in the heat race. It was just a good solid night. The crew worked hard to get Joe’s car back together and my car was just off a little bit. But Justin was just awesome. My congrats to Justin.”

Cicconi, starting outside pole, grabbed the initial lead but yellow flew just after the first circuit when Joey Payne’s 4, which has had some fuel pick up problems, once again quit on him. The race restarted with Payne in the infield and Cicconi out front. Lou immediately showed that his car had overcome the earlier problems and off he went. Trying to keep up were Brad Lichty, Belfiore, Mark Sammut and Pat Abold. By lap ten, Liquid Lou was rapidly approaching the tail of the field.

The 50-lap main was moving along rapidly on the Canadian semi-banked three-eighth mile as Cicconi had three lap cars between him and second place runner Belfiore by lap 15. But Belfiore wasn’t losing sight of Cicconi either as Brad Lichty, Abold, Sammut, Randy Ritskes, Russ Wood, Mike Lichty and Chris Perley ran some distance away.

At the midway mark, Cicconi had moved in on Joe Gosek driving the Lane 9 and traffic began to play a role. With twenty to go, it was evident that Belfiore was closing up the gap on Cicconi as Brad Lichty sat back in third with Abold, Sammut, Ritskes, Wood, Perley and Nokie Fornoro still maneuvering for spots behind.

As Belfiore pulled up on Cicconi’s bumper a couple of slower cars gave Justin the opportunity he was looking for and he dove under Cicconi who got hung up for an instant behind one of the lap cars. Belfiore took the lead and pushed his number 8 out front despite the fact that he was about to lose a motor.

The intensity of the action was halted suddenly on lap 42 was a precautionary yellow flew for the 7 of Tim Jedrzejek who had gotten sideways, then recovered. Cicconi had a lap car in front of him on the restart as Belfiore took off like a shot. Another lap car separated Cicconi from Brad Lichty, Pat Abold, Randy Ritkes, Chris Perley and Russ Wood.

One more yellow flew just into the last lap when Jennifer Chesbro spun in turn one.

It was Belfiore out front on the green once more as Cicconi moved by Mike Lichty’s lap car trying in vain toe catch him as Abold, Perley and Randy Ritskes ran top five. Perley made a move on Abold putting the Dunigan 26 back one spot as the checkered fell for Belfiore’s first win.