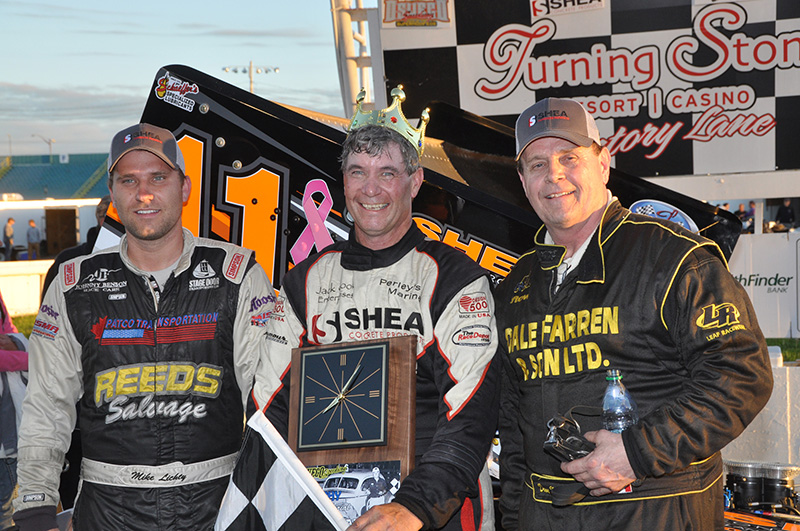 Oswego, NY – Chris Perley began his road to the top of ISMA’s all-time win list back in 1995 when he won the second running of the Oswego ISMA SuperNationals. He went on to win seven more times at the Big O up until Saturday. His last win at Oswego came in May of 2013. He had a podium finish in 2014 and 2015 bringing his top five total to a dozen. But that elusive ninth win at Oswego did not come soon.

The Vic Miller team debuted a new car in 2016 which brought Chris a third place at the 2016 Star Classic, but the car still needed tweaking. With Friday night’s practice cancelled at Oswego, all last minute adjustments had to be made on Saturday’s race day. The team made adjustments after each practice. Chris drove the Miller 11 to a 15.2 time trial and more adjustments. A second in his heat founding him sitting on the outside of Mike McVetta on the front row for the feature. It was go time. Perley took the lead from the green, and never looked back as they say. Three race yellows gave close challenger Mike Lichty a shot at the lead, but it was Perley taking the win, his ninth at Oswego and a first King of Wings title.

The large crowd on hand approved of his return which was actually a surprise to the “Rowley Rocket.” It also brought him to 73 features on the all-time ISMA list.

When asked in victory lane if he thought he’d be back there, Perley commented: “I never gave up. I knew we’d be back here eventually but I definitely didn’t think it would be tonight. The car was good. We screwed around all day. The car was giving us fits. We just kept working on it and I thought we had a racy car but I was really hoping for a top five even with a front row start. We just didn’t expect the car to be here in victory lane. It’s too new. But the crew just doesn’t give up. I didn’t give up and the car was good. We’ll take it. There were a couple close calls, but the car was good enough. I have to thank my crew and sponsors for supporting me they have all along.”

Mike Lichty, who used an early yellow to move into second and chase Perley the remainder of the way, was happy with second.

“A good race. Out of everything I’m extremely happy for Chris, Eddie (Shea) and Vic (Miller) and all the crew guys to see them back in victory lane. That’s cool. We had a good car, we were just a little tight running this early in the day. It’s kind of a gamble as to what you’re going to do set-up wise. Man, they were running real strong out there. My only shot was on the restart and I had him once. I got along side of him but we just lost the nose a little bit. I just couldn’t maneuver through traffic very well. But, I just have to thank Reed’s Salvage, everybody, my father, Dennis Level with the motor and all the crew. It’s off to Lancaster.”

Veteran Dave McKnight was right back in third where he had finished in 2016. “This was a good step in the Triple Crown. That sun was brutal man. I don’t think they should have started that race when they did. I couldn’t see anything. But, we just were a little tight. We took a guess at it. We were crappy in the heats and qualifying. We just threw something at it and it turned out half decent. I have to thank sponsors Liftow Toyota, Dale Ferran, East Penn Battery, everybody that’s involved with the team especially car owner Gary Morton. You know we’ve been struggling and this was a good, solid run for us. We were third here last year, third this year. Maybe we’ll get them at Lancaster.”

Under much welcomed sunny skies, Mike McVetta, who builds his own rocket ships, and Perley led the way to the green with Perley taking the initial lead. A quick yellow flew on lap 3 for debris on the backstretch, slowing the progress momentarily. On the restart, Perley shot ahead while Lichty made a move around McVetta and Timmy Jedrzejek to move into second and the chase was on.

The race was slowed again on lap 7 for Rich Reid’s 48. Joey Payne pulled the 14 in for some adjustments and picked up at the rear. The action resumed as Perley and Lichty began to pull away from McVetta, McKnight, Ben Seitz in his new Locke 37 ride, ISMA champion Dave Shullick Jr., Jedrzejek, Bob Magner and Trent Stephens, whose Stout crew had worked hard to repair the 19 during the afternoon after a tire blew sending him into the foam barriers. Perley was already approaching slower traffic when the yellow fell for a rare spin by Jedrzejek on lap 18.

Howard Page pitted here out for the night and the 97 went to the tail. It was on this restart, that Lichty got alongside of Perley but the 11 was able to repel the challenge and to maintain the lead. McVetta, McKnight, Shullick, Seitz, Jedrzejek, Magner, Edwards and Stephens ran top ten. From there on in it was just plain all-out racing to the checkered. Lichty kept up the intensity of the chase as the leaders maneuvered around slower cars. At the halfway mark Perley and Lichty were a distance ahead of McVetta, McKnight and Shullick in the top five.

By the lap thirty mark, McKnight had moved into third just ahead of Shullick and McVetta, Seitz, and Edwards. With ten to go, Perley and Lichty were threading through more traffic which saw Lichty closing up on the 11 but it was Perley who broke into clean air first, with Lichty having a little trouble doing the same. Remaining on the lead lap as the race wore down were McKnight, Shullick Jr., Seitz, McVetta, Trent Stephens and Mark Sammut. Timmy J was running tenth, one lap down. Perley crossed ahead of Lichty and McKnight in podium finishes with Shullick Jr. and Seitz rounding out the top five.

Shullick said of his fourth place, “It was a good race. We were way too tight. We were battling stagger all day. And they finally did what they were supposed to do in the race and we overcompensated and got it way too small. I was just tight and really couldn’t do anything on the restarts. So we brought it home in one piece to race another day. I’m happy with that.”

Seitz, driving the Locke 37 for the first time after Friday’s practice rained out, was pleased with the results. “It was a good solid run. The car was really stable in the race. We have some adjustments we need to make but nothing a new deal shouldn’t have to do anyway. I’d like to thank Ken Locke, his wife and his whole family for giving me the opportunity to run this car. We had some issues in practice and in the time trial. It was flawless in the heat race It was a little tight in the feature but basically I’d say it was flawless. I’m happy with the run. There were good cars out there. This was a good start for this team.”