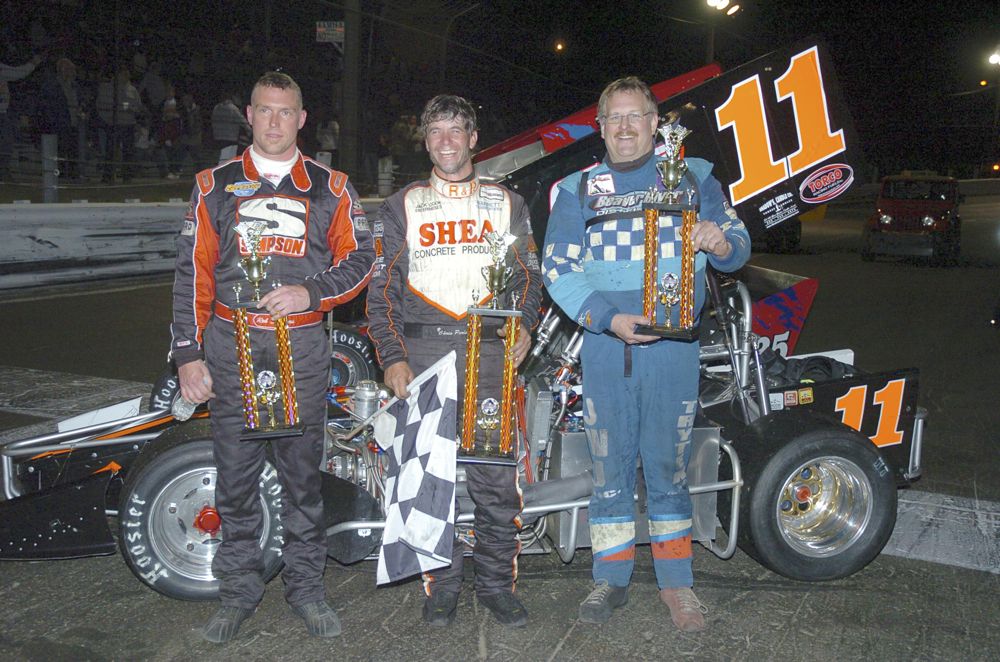 Waterford, CT – Chris Perley had won the Waterford ISMA 50 last season after two previous dnfs. It wasn’t really a surprise that he pulled off a repeat win after the season he had last year. But, he put a little icing on the cake this year by turning the fastest lap (12.489) ever seen at this Connecticut three-eighth’s mile bullring since it opened in 1951. And, it came on lap 44 of the feature to boot. Perley definitely is picking right up from his past two record seasons. Perley and the Vic Miller crew are entering a third season of wondering when it’s all going to end – if it’s going to end.

“I don’t know what this year is going to give us. To start off the year this way with the car as good as it is .. it’s unbelievable. I can’t ask for any more. The crew worked so hard over the winter. To be able to unload and just pull this off is great. As for that pass of Jeff Holbrook for the lead, I didn’t think I was going to get it. I kept on creeping up and creeping up. He was using a lot of track. I worked everywhere and couldn’t find a way by and when I did make it by I didn’t think I was going to stick. I can’t thank my sponsors and motor builder enough. Tonight was just a FUN race. I thought it might be a more exciting race if I’d got the lead on the last lap but I have to take what I can and get away. I think someone’s after me.”

Second place finisher, Holbrook, who had led from lap 20 until Perley got by, said of his podium finish, “The car is awesome. Robbie wiggled there and gave me a chance at second and I took it. I knew Chris would be along any time but second to Chris Perley is awesome anytime. This is great.”

Robbie Summers, who also had a strong lead at first commented in victory lane, “I’ve got to thank Howie Lane and the whole crew. We had a good car but we had an engine problem. I don’t know if it was ignition or fuel. It started skipping around lap 15, but we were able to finish third. I’ll take it.

Twenty-two ISMA cars were slated to start the 50-lapper but before the green the 61 of Michael Barnes sat in the infield unable to start. Car owner Clyde Booth said later that he felt the spool was spun on the axle. “It’s actually a rear end problem which we can fix.”

At the green, former SK Waterford champion-turned-super driver, Robbie Summers took off in the lead from the outside front row. Jeff Holbrook, Dave Sanborn and Jamie Timmons tucked in behind.

Only three laps in the yellow flew for a nasty hit as the 22 of Eric Emhoff bounced off the wall pretty much destroying his car. The 92 of Larry Lehnert also was stopped in two and he would not restart.

Summers was off again on the green and he and Holbrook began pulling away from the pack of Timmons, Mike Lichty, Mike Ordway Jr., Perley, Sanborn and Dave McKnight.

Perley patiently made his way up through. He described his race to the lead, “I didn’t know what we had for the first couple laps. I passed a couple people because I got lucky. I was riding around and I got loose a couple of times. The tires started heating up and the thing started sticking. Then I knew I had a decent enough car if I could get lucky enough to get through all the traffic. I had a couple deals where I had to take my time. The walls come off pretty quick here and if someone is not paying attention you can get in trouble. I got under a couple going into the corners and I backed out of it because I didn’t want to wreck anybody.”

But during most of the first half of the race, the eyes were up front on Summers and Holbrook. On lap 20, with a slower car facing the lead duo, Jeff Holbrook made a low move and took over the lead. Summers car was apparently slowing here as Perley moved by for second.

On lap 27 Holbrook finally could not hold off the formidable 11. Perley who had been looking for a way around the 35, made a spectacular move as the crowd gasped. “Jeff was running a good groove, right in the middle,” said Perley. ” I couldn’t get enough on the bottom and I didn’t think I was going to get enough on the top. I needed to show him a wheel to try to hold him in his lane. I went around on the outside. I mean it was high outside. I didn’t think the car was going to stick. I knew I had to show a wheel and go. It stuck and I just got on it. I didn’t want to hang around and maybe get pinched into the wall.”

On lap 37 all hell broke loose behind Perley and Holbrook who had the cushion of a couple lap cars separating them from the rest. Mike Lichty’s 84 was coming into turn 3 when an oil line broke spewing fluid on his tires and sending him around in front of Jamie Timmons, Scott Martel and Mike Ordway Jr. Red flew and the crash scene was not pretty. All the cars received some heavy damage. Mike Ordway Jr. was taken to a local hospital after he complained of a bad headache and some other pains. He was reported to be fine, albeit sore, after the check over.

On the lap 37 restart, yellow flew again when third place runner Summers brushed with slower car of Bobby Haynes Jr. and the two got out of shape. Just behind Russ Wood was facing the scene in the Holbrook 29. “They got sideways in front,” said Wood. “I had to lock them up to miss his motor and ended up in infield. I came back in the line back further. I think I might have third.”

It was smooth sailing from here on in for Perley and the remaining cars. Perley crossed under the checkered well ahead of Holbrook who was holding off Summers, Ray Graham Jr. and Bobby Bond who grabbed the spot from McKnight in the waning laps, for the top five.

Ray Graham Jr., whose beautiful 99 emerged from the hauler for its initial run earlier in the day, said later. “This is the first time the car has been on the track this year. It’s in one piece! We were tight all night but we stayed consistently tight so I think we know what we need to do and move on to Toledo and try and make it a little faster, Any time you can get a top five racing against these guys you take it.”

Bond, who has taken to the ISMA trail this season commented with a smile, “We’re happy on our first time here to come away with fifth. We did gain a couple spots after the accident toward the end there. We are just trying to hang in there and get a little experience and stay in once piece. I’d like to thank my crew – they work their butts off and to all my sponsors. I think we’re going to like this. It’s going to be fun.”

ISMA’s next series run is at Toledo Speedway on Friday, June 13.