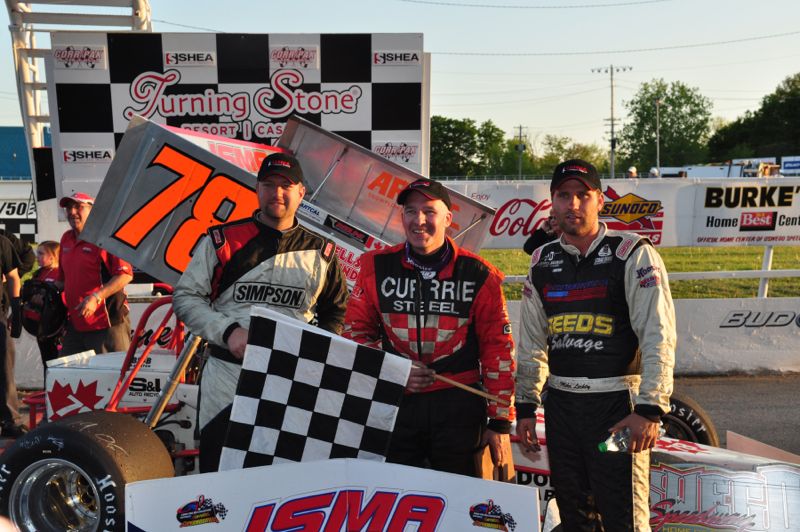 Oswego, NY — Just over a week ago, Canadian Mark Sammut had a good chance of winning the ISMA opener at Delaware, Ontario. After leading more than half the race, his win didn’t materialize and he settled for a fourth place. At Oswego Speedway Saturday night, Sammut moved into second place with less than ten laps to go in the Irish Jack Murphy Memorial 50 and deftly pursued fellow Canadian for the win. On the last turn of the last lap, Sammut pulled alongside Lichty and just edged the 84 out for the victory as they crossed the finish line. The ISMA portion of the Super Spectacle’ presented by Shea Concrete and Corr/Pak Merchandising win was worth $6000 to the London, Ontario, and his first-ever Oswego victory. It was a fifth overall career ISMA victory.

Said Sammut after his crowd-pleasing win, “This is unbelievable. We had one that kind of got away from us last week. I made a bit of a mistake and it probably cost us the race. I am lucky to be able to redeem myself tonight. I couldn’t get the 21 on the bottom and I didn’t have a lot on the top. Then Mike got by us both on the top and I said to myself I’ll have to get by him up there. By that time Mike had a fair distance on me so I just hung on and tried to move up.

“We came up on McKnight there near the end and unlike some other lap cars, Dave showed some respect, gave us room and got out of the way. Mike and I went by on the outside. Then Mike and I came into turn three and I said if I’m going to beat him to the line I have to go in deeper then he does on the outside and put him on the bottom. Lucky it worked out and I held it. We beat him to the line but it must have been by inches. I don’t we were very far apart.”

Mike Lichty, who had set a new track record in ISMA time trials with a torrid 14.829 lap, thought he might have the win wrapped up too, but for Sammut’s last lap charge.

“We were great all day. I couldn’t believe how quick the guys were running up front I figured they were going to fade a little and burn their stuff up. I got an opportunity to pass Mark around lap 35 and then got Eddie. The nI just got totally snookered. I opened a bit of a lead from what I heard and I was just cruising. I had no idea he was coming. I was getting to pass a lap car there with about five laps to go. I kept getting closer and closer, kind of cruising, thinking no one was behind me. I played it cool not quite sure how I was going around McKnight. I should have picked the pace up and got by him. Looking back on it now if I had passed Dave then, the end might have been different. Hey you live and learn. I’m happy we are on the podium and congrats for Mark.”

Dave Shullick Jr., who saw his hold on the Oswego winged track record, fall to Lichty earlier, was not displeased with his third place. “It was a pretty good run from fifteenth place. The car was a little loose. We had a right rear tire problem tonight. But you’ll have those. When you’re running for points and you can salvage a good run on a not perfect night, it means a lot.”

Alison Cumens, who had just won her first-ever supermodified checkered flag in her heat, sat on the pole alongside Eddie Witkum Jr. at the start of the Irish Jack Murphy Memorial 50 with Witkum taking the lead on the green. Moving quickly up to take second was Jeff Locke. Lichty, Sammut and Ben Seitz also moved by Cumens and the race was on.

By lap ten Locke was glued to Witkum as the duo had pulled away from the field and were encountering slower tail-end traffic. Behind them a good distance back, Lichty, Sammut, Seitz, Cumens, Jon McKennedy, Kyle Edwards, Ryan Coniam and Shullick ran top ten with Coniam exiting the race shortly thereafter.

The lead duo of Witkum and Locke maneuvered through traffic as the next three swapped positions with Sammut moving up to third, trailed by Seitz and Lichty now fourth and fifth.

By lap 20, the front runners of Witkum, Locke, Sammut, then Seitz, Lichty and Cumens spread out a bit in the clean air with Louie Cicconi and Trent Stephens finding mechanicals ending their race early during this green flag run.

On lap 22, the first of only two yellows in the fast-paced race, dropped for Ben Seitz as he contacted a slower car and crashed his 17. The car was flat bedded in and the 2014 ISMA champ was done for the day. Jim Paller, McKnight, Kevin Jaycox Jr., and Keith Gilliam went pitside during the yellow with McKnight and Paller returning to the fray.

The restart saw Witkum in command once again with Sammut now second, having moved by Locke just prior to the slowdown. Lichty, McKennedy, Cumens, Shullick and Edwards were behind as Danny Shirey, Rob Summers and Chris Perley were trying to gain spots. Perley, who had a driveshaft go in the heats, had started 23rd and was struggling to get into the top ten

With twenty to go, the top five of Witkum, Sammut, Lichty, Locke and McKennedy were pulling away from the second half of the top ten.

The top three battle became intense as the race wore down. Sammut was tacked to Witkum as Lichty was likewise on Sammut’s rear end, as Locke and McKennedy held their own duel, fending off Shullick Jr.

The second and final yellow fell on lap 34 when Mike McVetta’s 22 stopped in between 3 and 4 with an oil leak.

Green fell and the last 15 laps of the race finished up the story as the fans watched the front runners dice their way home. On the restart, Lichty tried to get under Sammut as Witkum held a precarious lead. Shullick, in turn used the opportunity to get my Locke as Lichty and Sammut ran side by in front.

In a one lap swoop, Lichty gained the lead as Witkum fell to Sammut’s pressure. Lichty wasted no time taking off from the second and third place fight as Shullick, Locke, McKennedy, Edwards, Cumens, Summers, Danny Shirey, Perley and Tim Ice were still racing hard behind.

On lap 42, Sammut put Witkum back to third and it was a Canadian fight to the finish. As described by Lichty, he really wasn’t aware that Sammut was sneaking up on him for several laps but on lap 48, Sammut had gotten into firing range and in that last lap, he found a way around as the two cars came side by side off four as the checkered was about to fly. According to the clocks, Lichty was .058 seconds behind the 78 as they crossed the line to thunderous applause. Shullick, Witkum and Locke finished up top ten.

Witkum described his race, “Well we led for 36 laps. That was all good. Once the fuel load went away, the car started getting tight. I knew those guys would be coming. We just hung on for as long as we could and ended up fourth. We’ll take it especially after the day we had. It was just a real tight car. We’ll make some changes. We’ll get it. I have to thank Bobby Harrington and Lee Vinal, my car owners, Pam and Lee, my Uncle Bob – these guys work non -stop, all because of my fault…”

Locke was happy with a good finish. “Another top five. This is a really good start to the year. The car started off loose, but started to get tight toward the end. I have to thank all these guys. They work so hard, every week. Thanks to my Dad, Brian Allegresso, Jerry Martel, Doc – all these guy work hard and I’m really honored to drive this car. It’s a lot of fun.”

ISMA returns to Oswego for their next event on June 13.