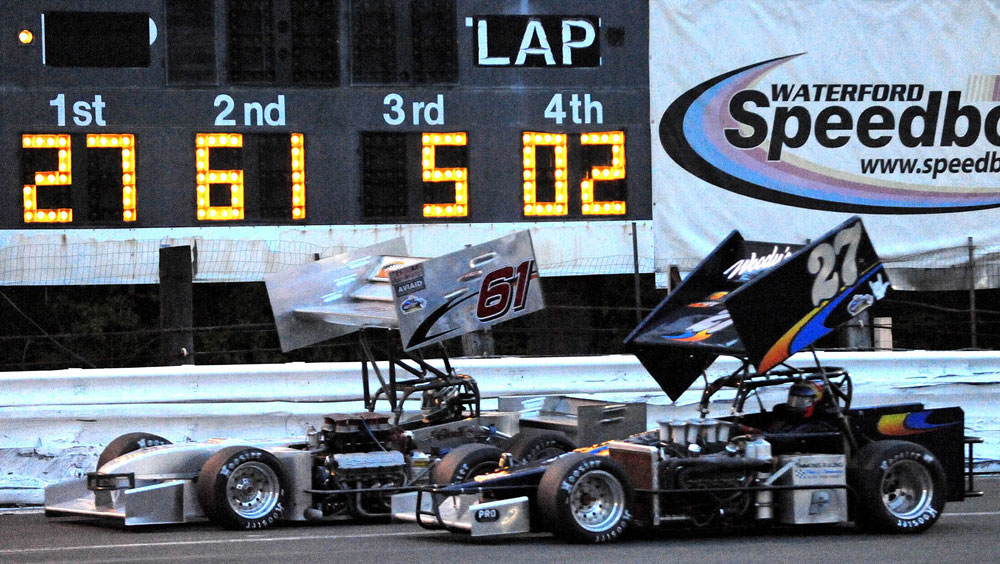 Waterford, CT –Dave Shullick Jr. took the Clyde Booth 61 out front at the initial green Saturday at the ISMA season opener at Waterford. When the checkered dropped 50 laps later, Shullick was still in that spot for the win. The Amherst, OH driver had to survive an unusual number of yellows and reds along the way to his first win of the season and his career fourth in ISMA. Standing with him on the podium were his two nearest challengers, defending champion Chris Perley and Lou Cicconi, the August 2008 winner at the “Bowl.”

Said Shullick in victory lane, “The car was excellent. Clyde and I talked before the race and tried to come up with the right package. Earlier in the day we weren’t really good. We hit it right before the heat race. The car was even better than the last time we were here. That means we are gaining on it. To come back after a big crash at Concord last fall and be this strong is even better. It’s really encouraging.”

The many restarts did not really faze Shullick.

“I didn’t know how far away the guys were on those restarts. I just tried to be consistent; to not make a mistake. I figured that I was on the bottom and if they were going to go around me, it was going to be on the top. I think we were running good enough to prevent that. I just went as hard as I could really. It was the longest 50-lap race I’ve ever been a part of. These cars are made to be comfortable when we’re going fast, not when we’re going slow. I’d like to thank Clyde and Susan Booth and our sponsors. Now it’s on to Toledo and one of my favorite tracks!”

Chris Perley was not surprised with his fight for second. “This is what I figured was our main competition was going to be and it worked out that way. We had a great race with Woody – with everybody actually coming through. Then with Cicconi. The car was too tight. We were worried it would be too tight and it still was. It’s the first race of the season and we have a second out of the box. I’m really happy.”

In third was Aston, PA’s Lou Cicconi who is back full-time on the ISMA trail in the Wentworth 10. It was also a long race for Liquid Lou. “I just raced my butt off for 50 laps. That was it and I got third. It was fun. I really believe if Dave had started in the back he wouldn’t have won. His car was real good when he was by himself, but he couldn’t run through traffic. His car was unstable. If Perley and I had started up front, they wouldn’t have caught us either. That’s cool.”

Twenty-six supers lined up for the ISMA main with Jamie Timmons and Shullick Jr. on the front row. A heat crash left the Budnick crew scrambling to get new driver Ben Seitz into his first main, but he would be the first to exit as Shullick pulled away in the lead.

Just as the race began to sort out, a red dropped on lap 8 which occurred when Chris Perley, Johnny Benson and Dave McKnight were moving up through the field. As the battle ensued, McKnight caught a wheel from the Perley car and was hard into the wall sending a careening tire into Rob Summers 97. McKnight described the accident later, “It was just racing – me and Chris and JB. We went down into one. I knew Chris was on the inside and JB behind. Chris and I came together. I climbed his wheel and that was the end of it. I got turned and went into the fence. It happens. I’m a little sore but otherwise all right.”

Shullick shot off on the green ahead of Mike Lichty, Jeff Holbrook, Cicconi, Russ Wood, Ordway Jr. and Perley

Lap 12 saw a quick yellow for Danny Lane who resumed at the tail.

Restarts allowed challengers like Lichty and Cicconi to close up on the Shoe II but not for long as he opened up a slight lead in the clean air head.

Unfortunately laps 15-17 caused several delays and losses. First Lehnert slid into the fourth turn tires and wall as the 51 of Duggan spun and both were done. The Jeff Locke 37 suffered a hole in the valve cover, Jamie Timmons spun and third place runner Mike Lichty experienced a rear end problem, which caused his demise.

It was Shullick, Cicconi, Perley, Holbrook, Ordway Jr. and Johnny Benson the top five as the race got some green flag laps. Unfortunately Benson’s 21 shut down on him just prior to lap 30 to bring out another later. The cause was undetermined.

Cicconi and Perley had a shot at Shullick once again, but the 61 glided away on the green. One lap later Brandon Bellinger and Craig Rayvals had an altercation and both left the field.

Finally, with all the opening day bugs worked out, the race went green and it went quickly as it was evident that Shullick had command but he’d been there before and had seen his 61 fail. This was not the case this race as he pulled away from the battling Perley, who had taken second after the last caution and Cicconi. Jeff Holbrook, Mike Ordway Jr., Mark Sammut, Russ Wood and Bob Bond remained on the lead lap as the field charged under the checkered.

Holbrook, with three cars finishing in the top seven, laughed later as he said of his fourth place finish, “It’s nice to be able to run and look at the smiley face on Chris’s fuel cell. You know you’re running good when you can run with Chris. I’m happy. The car was a little bit tight. I thought I might have had something for those guys if we could have been freed up a little. We all finished in the top ten. Everybody’s happy. It’s a good start to the season.”

Young Ordway, who had new Holbrook owned mount under him, was all smiles. “This is pretty good considering we just finished putting the car together this morning. Right out of the box it was pretty quick. We battled a tight condition all day. We were real tight in the feature. We’ll take a fifth for the first run in the car. I told the crew after the first practice that this car is already way better than the old one. So we have a good car to work with.”