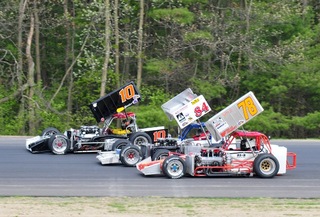 Malta, NY – Liquid Lou Cicconi was supposed to pilot a midget on the newly paved Albany-Saratoga Speedway earlier in April; perhaps gaining a slight edge for the May 2 ISMA opener. That race was rained out, but for Cicconi, it turned out, it didn’t matter. The Aston, PA driver started ninth on the grid for the 50-lap inaugural winged super feature, moving into second on lap 19.  He seized the opportunity to take the lead from Dave Duggan after a lap 21 red flag, driving by the 51 on the backstretch. As the race shook out, Chris Perley and new teammate Mike Ordway Sr. were able to track Cicconi down but Lou held out for the win despite a late race yellow. The win put Cicconi in a tie for 9th on the ISMA All-Time win list.

Said Lou in victory lane,  “This is a really neat race track. The more we ran the more the track came in and got racy. It was really a challenge after I took the lead. When I got pushed started after that red, my brake got stuck. I thought it was going to slow the car right down. I had Chris behind me and I thought it was going to be all over.  Luckily there was a lap car between us on that last yellow. It was very exciting. I’m happy for the Wentworths and our sponsors – although we don’t have too many.”

The late race caution Lou mentioned came on lap 46 when the 97 of Danny Lane ended up in between one and two with a flat tire. Lane was able to return. But when the race was scored back to the last completed lap, ISMA’s 2009 Rookie of the Year Ben Seitz, was placed in between the 10 of Cicconi and the 11 of Perley where he was showed to be running at the time. He was a lap car, but provided what the 2009 ISMA champ Perley thought made the difference in the race.

Perley commented in victory lane, “It was a good ride. I was hoping the track would come in for us and I think it did. We did the best we could out there. It was pretty slick with the heat.  That lap car in between us toward the end of the race hurt us. I thought we were in front of the lap car long enough for them not to put him there on that caution but it’s too late now. I can’t pass a lap car until the apex and it kind of took the win away from us. But, my hat’s off to Louie and the team. They did a great job. I also want to thank the fans. Obviously we can’t do this without them and I hope, excluding the cautions, that we put on a pretty good race today. It was a shaky start but once we got the cones out of the way I think we put on a pretty good show.”

Mike Ordway, in the third Vic Miller-designed car in victory lane, also was not altogether happy with the race. “I’ve driven this car a couple times over the past few years and I knew I was going to do okay. Chris helped me out and told me what the car was going to do. It was a pretty good run. One of those restarts a guy drove right into me. He spun me out. They put me to the rear and you had guys stopping on the track and they put them back in position. I don’t know what happened to the rules we used to have. I wasn’t happy over that. I just had to calm down and bide my time and get back to the front. The car was good, although I had a little push. Starting toward the front of this race helped. I’d like to thank my personal sponsor Harrington Paving. Then there is Ed Shea Concrete, R&R Racing Engines, Perley’s Marina, New England Motor Racing Supply, Barrett Transportation, Blink’s Fry Doe, Malco Products of New England who support both cars. It’s a real team effort. You can see that from the last few years with Chris.”

Although Saturday was a practice day for the supers at the former dirt, now paved 4/10ths mile oval, there was still a lot to figure out when real racing conditions began. Dave Duggan and Bob Magner led the 22-car field down to green after early attrition had taken out the 25 of Bob Bond (accident) and the 98 of Justin Belfiore (motor). On the green, Russ Wood and Mike Ordway sat turned around in the first turn as Mike described and relegated to the rear before a lap was complete.

Dave Duggan took up the lead with his 51 but lap 5 saw a yellow for the 88 of Joey Scanlon who had produced a healthy stream of oil around the track. Michael Barnes, in the Morton 70, left the race with a damaged front end here.

Duggan, who had picked up his first-ever ISMA checkered in the first heat, kept the point at the green with Magner, Eddie Witkum, Jeff Locke, Mark Sammut and Cicconi trailing closely. A yellow flew on lap 12 when a cone, lining the inside of the track, ended up on the track. Bob Magner exited the track from second here thinking the car was overheating badly only to find out later it was the gauge that had malfunctioned.

Another quick yellow flew on the next lap as Brandon Bellinger slid off the track but came back on to head to the rear.

Back underway, Duggan began to pull away from the 9 of Eddie Witkum but on the move was Lou Cicconi who was now fourth behind Jeff Locke. Cicconi put the Wentworth 10 into second before the halfway mark.

On lap 21, Oswego 2009 champ Otto Sitterly broke a torque arm and coasted to a stop to bring out the flag. The fluid laid down brought out the red flag and a refueling.

On the green, veteran Cicconi was able to drive neatly under Duggan for the lead who now had Chris Perley, Mike Ordway Sr., Jeff Locke, Russ Wood and Mike Lichty charging at him from behind. Perley took over second by lap 26 with Ordway coming by one lap later for third.

With 20 to go, the race battle began to form between Cicconi, Perley and Ordway with Duggan holding off Wood and Lichty. Traffic now became an issue.

On lap 37, Cicconi put a lap on Jeff Holbrook to create a roadblock for Perley. Five laps later Mark Sammut, Ben Seitz and Danny Lane were in Cicconi’s path. He picked off Sammut, then Lane and Seitz. But before lap 46 was complete, Lane sat in 1 and 2 with a flat.

When the green finally dropped, on the lap 46 restart, the lineup saw Cicconi and Perley separated by Seitz. Ordway, Duggan, Wood and Lichty were next in line. Lane returned to the fray at the tail.

Perley and Ordway had both put Seitz behind them as did Wood and Lichty as Cicconi came around for the checkered on lap 50 a couple car lengths ahead. Wood was more than pleased with his fourth after that initial mishap.

Said Russ, “At the start of the race there was a bunch up in front of me. I got off the brakes a little. I don’t know if I got hit from behind. I just suddenly spun around. We backed into a cement barrier and did some frame damage. I was lucky to continue. We just kept picking away. You can’t give up… guys fall out and this and that. Hey, we ended up fourth. I’ll take that. We’re hoping to have a good season and win a couple more races than last year. We won one last year and I wouldn’t mind winning 4 or 5 this year and the championship.”

Said fifth place finisher Mike Lichty afterwards, “We were half decent at the beginning. We just couldn’t do anything. I tried the outside. Louie got underneath me then. When I washed out there definitely wasn’t a second groove on the racetrack. Fresh pavement. I kept trying to get it to work but I never did come around. We weren’t going to go anywhere on the bottom. We got freight-trained when Jeff Locke almost lost it there. I had only one way to go and it was high. So, all in all, we’ll take a top five and go to Waterford. We always run very well at Waterford. We have some really neat tracks coming up that I’m looking forward to.”