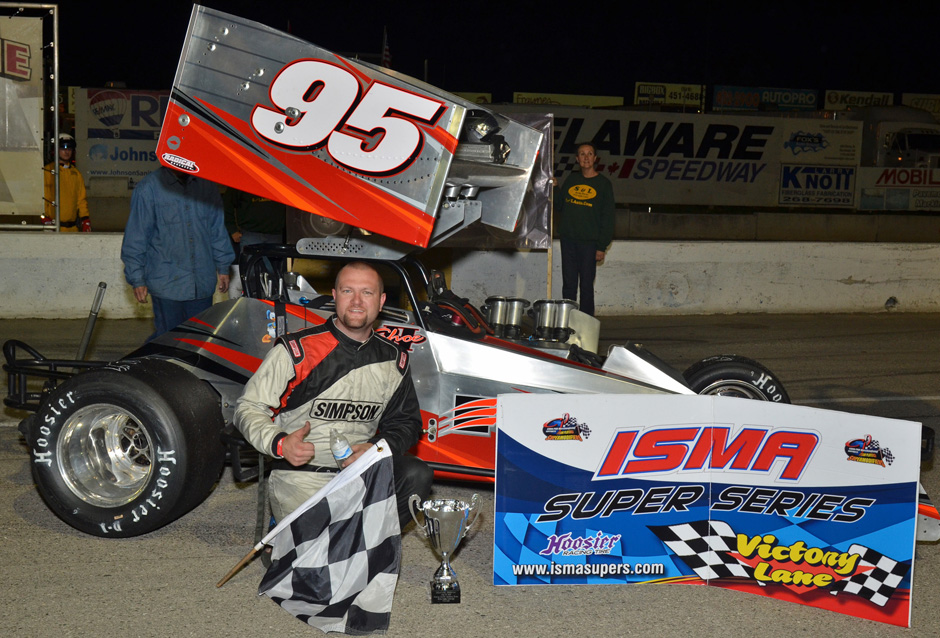 Delaware, Ontario — At ISMA’s opener of the season, Ohio’s Dave Shullick Jr. turned up the heat on his Jim Bodnar-built 95 super nicknamed “Fire” Friday night at Delaware Speedway to make a torrid last lap pass of race leader Jeff Locke. Shullick and Locke both had past Delaware wins in their resumes and they put on a almost side-by side duel to the finish each looking for another victory. For the last 15 laps of the 75 lapper they had the fans on the edge of their seats as they clocked high 15 to low 16 second laps on the Canadian half-mile. As the white flag unfurled over the 95 and 37, Shullick made his move and edged by Locke in turn one heading for victory. It was both a joyful and a poignant win for the Amherst driver as he dedicated the win to two very special people.

“The car was really good. It never faded at all. It was as good on lap one as it was at the end. It’s just a tough place to pass. There’s no place to do it. I had some really good runs off four. I was getting around a lot of people there. I was almost thinking of bonsai’ing Jeff in three a couple times but I really didn’t want to crash us both. On the last lap, I saw the white flag and I was underneath him pretty decent. I knew I was going to drive it in there. I made a run going into turn one and it stuck and he gave me plenty of room. I appreciate that.

“This race I’d like to dedicate to two people. In November I lost my mom…it was really emotional. She was a big part of all this racing group. We’re missing her a lot. Then in January we lost CoCo Adams, who was a friend and on our crew. This race is for both of them.

“It was my eleventh year anniversary today. My wife is home in Ohio. She didn’t make the trip. Thanks to her for letting me come race today. Happy anniversary!”

New Hampshire’s Jeff Locke, who took over the lead from Canadian Mark Sammut on lap 52, had won his career-first ISMA victory at Delaware and was looking for a second win there. It was close, but no cigar.

“I had a good run; finished in second. We did good. Congratulations to Dave Shullick. They deserved it. They had a pretty good car. It was a great run for them. I’ll definitely take a second for the first race of the season. It’s something to build on and we’ll go get them next week at Oswego.

“I have to thank everybody who works on this thing. They gave me a good car to run today. Thanks especially to Brian Allegresso, Doc Hathaway and Jerry Martel. These guys bust their butts and I really appreciate it.”

2014 ISMA champ and winner of the past two consecutive events at Delaware settled for a third place finish. Said Ben after the race, “The car was good. We had a solid third place finish. And I’d like to thank my sponsors, Sam Lorusso and his family, and my car owner Dickie Bien. He gave us a good car tonight. We had some car issues that kind of slowed us up towards the end. I think we would have been right in contention if some parts hadn’t failed. It was a good night. I’m happy to come out on the first race of the season with a third. We can go on to Oswego and keep fighting.”

Mark Sammut jumped to an early lead from his outside front row spot and looked to be the man to beat as he quickly built up a lead over Locke, Seitz, Eddie Witkum Jr., Jon McKennedy and Rob Summers as the race began to sort out.

By the lap 20 mark, the leaders were hitting slower traffic but Sammut prevailed. On lap 28, things came to a halt when the yellow flew, first for a visible fire under the 48 of Rich Reid and also for a spin by Rob Summers as Mike McVetta and Tim Ice pitted during the confusion.

Sammut took up where he left off on the restart but Locke, Seitz, Lichty and Shullick Jr., who had started 12th, were now within firing distance. But Sammut was able to pull away as the battle behind took the pressure off for the time being.

On lap 50, a few positions had changed behind Sammut, with Locke, Seitz, now Shullick, Lichty, McKennedy, Perley, and Ryan Litt still pursuing the 78 while guarding their current spots.

Suddenly, on lap 52, the leader came off turn 4 meeting some lap cars. Sammut brushed with one, the 21 of Witkum and as the two struggled to keep their cars going straight, Locke seized the opportunity and jumped by on the outside to take the lead. No yellow flew and Sammut recovered to keep second while Shullick gained third. Seitz, Lichty, McKennedy and Perley were top seven.

It was now Locke building up a healthy lead on a track with a declining field as cars dropped by the wayside. But it was not long before the last yellow of the race came on lap 58 when Dave McKnight and Rob Summers tangled in between turns one and two. Both were hooked out of the race.

On the restart, Locke led, but Shullick put “Fire” past Sammut and began his pursuit of Locke.

The race became a two-car battle out front as a few car lengths behind Seitz held off Sammut, Lichty, McKennedy, Litt and Perley. Danny Shirey in the Stout 49, Alison Cumens and Witkum were the only other cars on track, but not on the same lap.

It was a constant onslaught by Shullick on the outside of Locke, but lap after lap, Locke reciprocated. Seitz, in third, moved slightly away from his challengers as the laps wore down. Cumens left the race when a puff of smoke emitted from her 39. She would finish 10th.

Still flying around the track, Locke and Shullick continued their exciting wheel to wheel racing, until that last lap when Shullick finally made a pass attempt stick.

Shullick crossed under the checkers leading only the most important lap – the last one. Locke, Seitz, Sammut and Lichty finished top five.

Sammut described his run, “We were lucky we had a great starting spot. So that helped a whole bunch especially on a track like this. It’s tough to pass. At the beginning of the race I was trying not to use the car up. I was cruising around really. We got into lapped traffic and I saw the 37’s front bumper a couple times so I stepped it up a little bit. As the race went on the car seemed to be getting better. Then I got into the 21 a little bit. It wasn’t anybody’s fault. Just one of those things. That let Locke get around the outside of me. I’m to blame as much as anybody. That cost us the lead. Then we were running along pretty good but the last restart killed us. The tires were done after that. The car never did really come back to what it was. It took at last five laps to get going again. Even if we’d been leading on the last restart, I don’t think we would have been able to hang onto it. Hey, it was a good run; a good way to start the season. The car’s in one piece. Compared to a couple nights we had last year, the car ran really well.”

Fifth place finisher Mike Lichty commented later, “ We were good at the beginning. We started ninth and we were up to fourth around lap 30. We weren’t pushing the car too hard. The car was just very, very good. Then after the first caution, it just went real, real loose. We just had to fight the race track and the car after that. It looked like a lot of people had problems, other than the front two and Ben obviously had it figured out. Hey, we’ll take it. This isn’t my best race track and the car’s in one piece. I’m extremely looking to Oswego!”

Pit Notes: Trent Stephens had something break in the rear of the Stout 19 in practice. The crew took the part to the Sammut garage to weld it and came back just in time to run the feature. Unfortunately, Trent only got in two laps before exiting… Lou Cicconi had a fuel like go in the 9 and followed Stephens to the pits 8 laps later…The 48 driven by Rich Reid had a broken cylinder head in the Bill Denny-owned machine…Tim Ice’s 65 pulled in 17 laps shy of race end with a leaking problem.. The 46 of Coniam, the 39 of Cumens and the 5 of Kevin Jaycox Jr. all had mechanical ills keeping them from finishing. The next ISMA event is the Jack Murphy Memorial at Oswego on May 23.