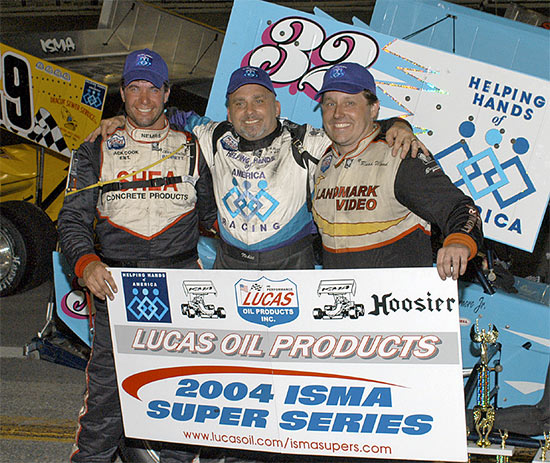 Wall, NJ – It was a night of firsts at Wall Speedway Saturday night. It was the first ISMA feature to be completed in 2004 and it was the first time the Lucas Oil Products-Helping Hands America group had ever run on the historic New Jersey third mile. But, it wasn’t the first time in victory lane for the winner, Nokie Fornoro. He’d been there before. After a grueling 100-lap affair that took its toll on the winged speed merchants, Fornoro was as animated as ever surrounded by the Soule Racing crew in victory lane. He had passed race leader Randy Ritskes in a traffic move between turns three and four – not an easy task by any means – for the $3,200 inaugural win.

Said the Reeders, PA driver in the post race ceremonies. “If I didn’t have the crew that I have, Danny Soule as the car owner, and Helping Hands our sponsor, I wouldn’t be standing here right now. I’ve won here at Wall in the seventies, the eighties, the nineties and now in 2004. This is my favorite hometown track. It’s a hard place to pass on. Whatever division you’re racing in here. You have to be square coming off the corner to make the pass or someone will go in the wall. It’s not that a guy puts you there, it’s just that they can’t see you. Once I got alongside Randy, he picked the pace up, but I knew he had seen me so I made the pass. You have to be careful with your tires here. Thanks to all the people who came out here tonight. Without you all, we wouldn’t be here. And, one more thing. Yesterday was my son’s 17th birthday and I just want to thank all of you made donations when he had Hodgkins and tried to help us out. I want to thank you.”

Jamie Timmons led the 21-car field down to the first-ever feature green at Wall but caution fell almost immediately on lap 3 when Dan Osmoloski brushed the wall for the first yellow. On the restart, Randy Ritskes, filling in for the absent Bobby Santos III in the Lane 97, ducked under Timmons for the lead off turn two. Ritskes, whose own ride, the Lane 9, was without motor, tried to power away from second place runner Justin Belfiore, but the action slowed again on lap 15 when Jonathan McKennedy had a tire go down.

Back underway Ritskes was in command, but was also trying to conserve his tires for the long road ahead. At the one quarter mark, it was Ritskes, Belfiore, Lou Cicconi, Mike Lichty and Dave McKnight. Belfiore was next to be a victim of the narrow passing lane as he ended up in turn four with his steering gone.

Lou Cicconi, no stranger to Wall himself, made a move on Ritskes when the green dropped but one lap later Lou’s bright yellow 75 was on the hook with a broken heim end. Lou would repair the car and come back only to have it happen again later on.

Some lengthy caution laps between that lap 29 incident and lap 32 found Kevin Torigney and Dave McKnight going in the pits for repairs. Refueling was called while the cleanup ensued.

The race went clean after the red until lap 45 with Ritskes out front a good distance away from Mike Lichty, Pat Abold, and Fornoro. Chris Perley, Russ Wood and Joey Payne. Louie Cicconi’s second caution came here to fly the yellow again. He was hooked off the speedway but racing slowed quickly soon thereafter as Pat Abold tried to make a pass for second. Abold, driving the Dunigan Racing 26 described his night. “The whole thing started earlier when I was going for second. I felt I had it done, but I got crowded, had a tire go down, changed it and came back up through the pack. I got back to sixth when I was coming down the backstretch and just rubbed the wall enough to cut a tire, which sent me into the wall. It was just one of those rough nights.”

Mike Lichty also had to exit with a flat tire after the lap 45 yellow with Abold.

At the midway mark, Ritskes began to feel the pressure from Fornoro, Perley, Payne, Russ Wood and Dave McKnight. The race was beginning to heat up and Fornoro finally made his move in traffic for the lead on lap 63 and began to leave the rest behind.

Dave McKnight blew a radiator cap on lap 75 which sent a geyser of steam and water up out of the 94 and the caution flag unfurling.

Fornoro was making it look easy as others struggled to pass out back. Ritskes was holding off Perley, Payne and Wood, but Nokie’s lead melted down once again on lap 79 when Jamie Timmons blew a motor. Less than five laps later Abold’s 26 went hard into the wall and his run from the back ended there. Mark Sammut and Jen Chesbro were involved in a jingle on that restart.

With ten to go, Nokie was definitely the class of the field. Joey Payne, who had worked his way into fifth looked to be the mover until Payne’s 4 began to sputter and move backwards. Said Payne, who has been campaigning a modified at Wall when time allows, “ I think it clogged the nozzle. It had a fuel pick up problem. I had enough fuel when I came in. It’s just a shame. The car was awesome. This is a track where you need patience. I had the patience. I was saving the car for the last twenty laps. Unfortunately that’s racing.”

This final restart on lap 97 allowed Perley to gain enough momentum to take second from Ritskes, whose car was also choking from lack of fuel. At the checkered it was Fornoro, Perley, Wood, Ritskes and Scott Martel in the top five. Mark Sammut and Jen Chesbro were six and seven with the only other car on the track, Billy Buyck, down to the leaders, finishing ninth.

2003 ISMA champion Perley said of his race,” A good finish for the start. I don’t think I passed two cars. Everyone just kept dropping out. At the end I actually wasn’t that good, it was because Ritskes was running out of fuel when I passed him for second. He was just trying to cover the track. It was pretty hard to get by anybody. But I guess I had just enough. I feel bad for Randy. He led most of the race and it looked like he had second tied up. If I didn’t get him, Russ Wood was going to get me. It was a war. The three guys up here tonight ran clean. We had a good time. I don’t know what happened behind us. It was a good day.”

Third place finisher Russ Wood commented, “We just hung in there. I couldn’t turn. Our car wasn’t too bad. I just couldn’t make up any ground. I think Joey Payne was having a fuel problem there and maybe Randy Ritskes. But, that’s racing. We just ended up third and we’ll take it.”

Ritskes, who hung on for fourth said later, “Just one more gallon of fuel. With the car under power, Nokie was a better car at the end. It was a good car early. I stroked it as much as I could. Then Nokie showed me how fast he could go. I tried to keep up with him. It had enough to pull away from Chris, but I couldn’t catch Nokie. Then I ran out of fuel and I just started crying. It was fun. I’m proud of these guys. It was a good night for my first time in the car.”

Scotty Martel’s run to a fifth achieved his night’s goal. “Our motto tonight going into this race was don’t get eliminated. We were able to do that and therefore we came out with a fifth place finish. We’re not real proud but we’ll take it and go on to Seekonk where we have a little bit more room to race.”

Notes… Rick Wentworth was a victim of a hard hit in his heat when a radius arm bolt broke sending him into the first turn wall…Dave McKnight had to switch Patco cars when the motor in the 94 would not stay running.