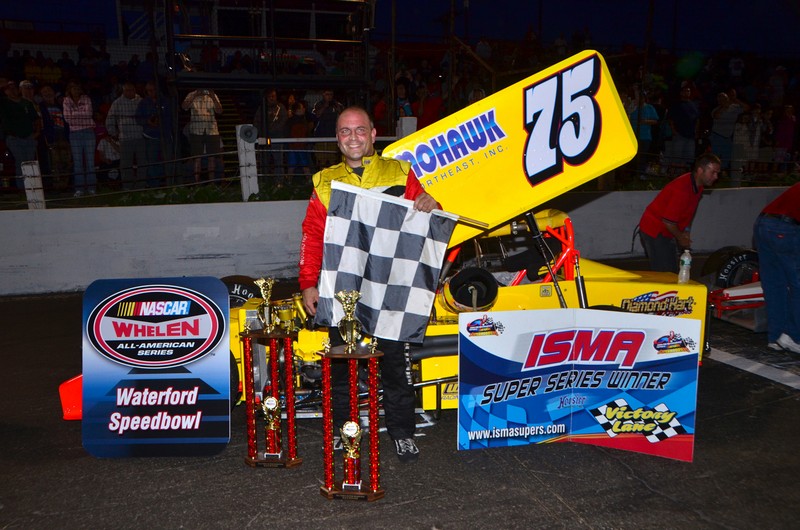 Waterford, CT – After a few sprinkles cleared the area on Saturday, June 9, the rainout of the May 26 ISMA opener at the Waterford Speedbowl had no threats after that from the weather. Nineteen cars were in the pits with Bob Dawson and Eric Emhoff not making the return.

After a shaky start to the 50-lapper, polesitter by virtue of the redraw, Liquid Lou Cicconi ran away and hid from the rest of the race, leading every lap and lapping everyone up to third place finisher and teammate Tim Ice. Cicconi was into the tail of the field by lap 18 and no challenger ever got close as he threaded through the field. Rob Summers, driving the Miller 11 got up to second but could not even see Cicconi’s 75, a former Vic Miller car which Lou purchased last season. The win was Cicconi’s 4th at the Speedbowl since he won ISMA’s inaugural 50-lapper in 2005.

Cicconi was obviously prepared to run with his new mount and run he did diving in and out of traffic at some amazing speeds. In victory lane he gave credit to the man who sold him the car, Vic Miller.

“Before I get into anything else, I really need to thank Vic Miller for selling me the race car and then taking me under his wing since I bought it. He’s gone over and above what he needed to do to make me fast. I really appreciate it. Secondly, I’d like to thank Dave Shore, who owns the race car, for putting me in it and working with the team. And, thanks also to Tim Ice who is a teammate but who has also worked real hard, coming down from Ohio to work 8 hours on the car. Also thanks to Church’s Auto Parts, No Regrets Tattoo, Diamond Hart, Goodwich Hosing and Fittings, Jones Racing Supply and Mohawk.

Cicconi’s nearest challenge came from Mike Ordway Sr. who early on was able to stick with the
75 until Mike pulled the 61 into the infield with fluids leaking on lap 12. Lou then stayed pretty much solo out front until the end, but really didn’t realize the length of his lead until late in the race. “I really didn’t realize how far out I was until three laps to go when I was lapping Tim. I could see on the scoreboard that he was third and then I knew. I was pretty fortunate in traffic because a couple of times I came up alongside of people and I didn’t think they saw me but they did and they gave me room. They were pretty considerate. I was pretty cautious too.”

Running way back behind Lou was a tight pack comprised of Bobby Magner, Tim Ice, Jeff Locke, Rob Summers, Mark Sammut and more but by lap 20, the 75 was already behind the 13th place car in the pack Ben Seitz as Lou pulled by car after car.

On lap 30 as the race ran at a torrid green flag pace, Rob Summers took over second from Magner but was nowhere near Cicconi to allow a challenge attempt.

Lap 37 saw the first caution for a simple spin by the deRitis 66. Although the field bunched for the restart, at least a half dozen lap cars stood between first and second. On this yellow Magner pulled into the infield out of third as Eric Lewis also exited the event.

Cicconi was asked later if he would have favored the lead lap cars to be moved up behind him ala NASCAR style. Lou commented, “To be selfish I would because sometimes lap cars around me are potentially dangerous. It might be better if they just moved them a little bit. When you are like on their right rear, they don’t know you are there. If you noticed I backed out a couple times rather than go in the wall. Maybe we need to start using the move over flag again to let people know they are getting lapped. But in the same sense if they put the cars on the lead lap right behind the leader on a restart, that’s not right either. I earned the spot I’m in and they didn’t. That’s just my opinion.”

Unfortunately with two laps to go second place runner Rob Summers met with the wall on an attempt to get by one of those lap cars as described above as he brushed with the 32 of Timmy Jedrzejek. Rob said later it was just a racing incident but he was very disappointed in wrecking his new ride instead of finishing in second spot. There was heavy damage to the front of the Miller 11.

Cicconi crossed under the checkers moments after the restart but ironically, caution flew for the 97 and 51 as they approached the line off four, with the 97 incurring some heavy damage. As second place runner Mark Sammut who sitting behind that pack of lap cars, slowed to avoid, Tim Ice jutted ahead. The scoring recorded Ice in second and Sammut third, but that was reversed after it was reviewed. Unfortunately Mark was interviewed in victory lane as the third place finisher and Ice second.

Mark said later about his run, “The car was running good but the restarts were absolutely horrible. Every time we had a restart it cost us. But, it was great when we had that long green flag run. When we came up on the accident, I slowed and Tim got by but I knew you can’t gain spots under yellow, so I feel better now that I got second back.”

Ice, who thought he was second and then was third, commented in victory lane, “ I worked hard to get the car down to the bottom of the track. There seemed to be a lot of grooves out there tonight to work with. In that long flag run there I got a little bit loose. Traffic was a little tough, and I had a hard time with it, but we got through it and got up toward the front. Louie was so far out of sight, I couldn’t see him. He always does things a little differently. We just formed this team and he’s a teammate of mine now. We’re going to operate these cars out of his facility. So the 65 and 75 will be a team this year. To come out and get first and third the first night out is pretty special. I want to thank Lou Cicconi very much.”

After Cicconi, Sammut and Ice were Benson and Jeff Locke the top five. Only the first three were in the lead lap.

Notes: Justin Belfiore chose to run scratch after winning his heat due to mechanical problems… No information on how McKennedy, the VMRS point leader, made out at Seekonk after having to forgo the ISMA Waterford show…Next up for ISMA is the June 30th Stafford Motor Speedway show, this year on Saturday!