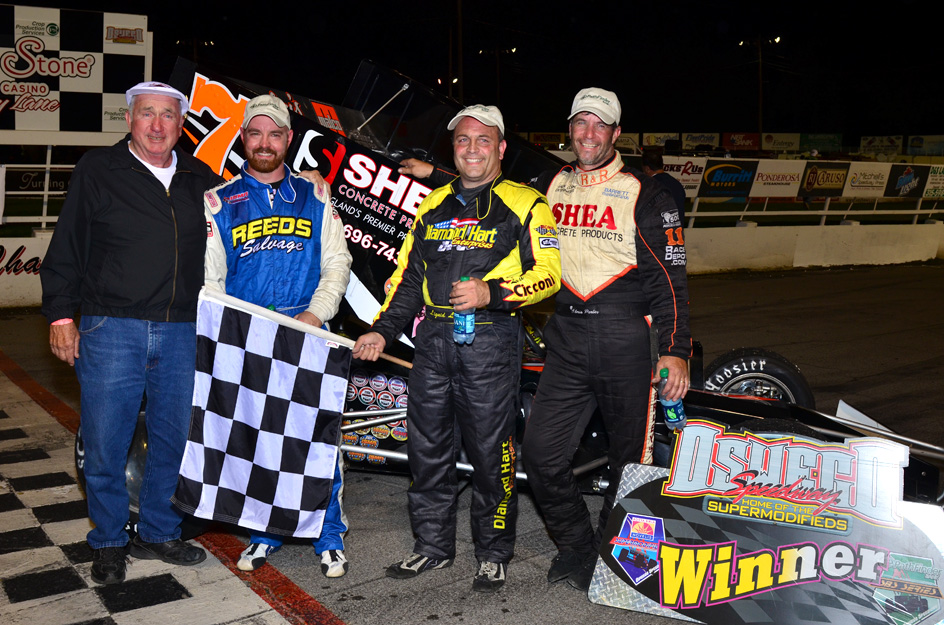 Oswego, NY – It’s hard to believe that in the almost 40 years “Liquid” Lou Cicconi has been racing that Saturday night was his first-ever trip to Oswego Speedway victory lane in a supermodified. Cicconi, who stands eighth on the ISMA All-Time win list and has recorded many wins in various divisions over his illustrious career, bested his teammate Chris Perley to accomplish the feat in one exciting feature which saw Mike Lichty lead over half the 50-lapper before Cicconi took over. At race end it came down to the dynamic duo of Cicconi and Perley in the Vic Miller machines that raced each other to finish one-two for the second event of the young ISMA season with the top spots switched from the May 4 opener.

The animated Cicconi was obviously pleased with his run. “This was just awesome. It was the best. I can’t believe how good the car ran on the outside. You know I’ve been fast here before but today I was on … every restart, every lap. It was just my night. I couldn’t do anything wrong. I knew I could catch Mike in lapped traffic because he looked like he couldn’t pass anybody.  It was good stuff.  I watching the score board and knew Chris got behind me. I didn’t think he was going to get by me. I wasn’t worried. Chris is such a good driver.  This is my first feature win here.  I finished second to the 84 car a number of times, but never first. I’d like to thank the Miller crew and Scotty, and I appreciate them letting me run the car.”

Perley, who notched his 71st ISMA feature win at the first event with Cicconi chasing, commented after his second place finish. “Louie looked solid. The car was not what we had last time. I fought for every inch. We’re still searching with it. The car was loose from the start, but I think it is awesome for the team. You can’t be in better company. I’m amazed that I got here. I got lucky with a couple people when Lou looked like he was on his game. I knew I wasn’t going to catch him but I was going to pump myself up a little, especially on the last restart.

“I can’t believe – a 1-2, 1-2 for both races. That’s made in heaven. I don’t think I can keep up with this pace though. I got mired for a while but was able to race through. It was a great race. It was a lot of fun. Vic Miller builds a great car and we’re just lucky to run them. Thanks to the crew, great motors, the sponsors – Ed Shea is here tonight, and everyone who helps out.”

Ohio’s Moe Lilje, who had a devastating crash in the May 4 Shea Concrete Super Series event in a heat race, was more than pleased with third. “I sure worked for that third place. Oswego has not always been the kindest to me. Chris and Louie got me on a couple restarts. But what goes around comes around and I got a couple other guys on restarts. I don’t know if we had a third place car or not but I drove the wheels off it and at least I got to park it on the front stretch.”

It was definitely Cicconi’s night as he once again topped the time trial list with a 15.2 and then went on to win the third qualifying heat for the 28-car winged super field, pared down by one when Joe Gosek lost a motor early in practice.

2012 ISMA champ Mike Lichty and Tim Ice led the field to green with the Vic Miller teammates starting side by side in the fifth row back. It was Lichty who grabbed the advantage up front and he immediately darted away from the field.

Yellow fell on lap 5 when the Kody Graham car laid down some fluids, but Lichty put the pack of Ice, Ray Graham, Cicconi, Lilje, Sammut and Perley behind him on the green.

The 84 was comfortably out front until lap 16 when another yellow dropped for Alison Cumens and Mike Keeler who met the foam in between turns 3 and 4. Both cars were hooked with the 39 appearing to receive the most damage. Several cars pitted in the interim.

Lichty continued his healthy lead on the restart but a smooth-running Cicconi was picking his way forward and was challenging runner-up Tim Ice for the second place spot as the laps ticked toward the halfway mark. Behind Cicconi was Ray Graham, Lilje, Perley, Mark Sammut, Dave Gruel, Jeff Locke and Jon McKennedy competing for top ten spots.

Traffic began to play a role and Cicconi used it wisely to gain second by lap 27. But Lichty played the cat and mouse game well and he was able to keep Cicconi’s 71 at bay.

A slowdown came on lap 34 when Dan Lane brushed the inner hub but was able to continue. This put Cicconi on the back bumper of leader Lichty and soon in front of the 84, who was developing problems with his car.  Lichty said afterwards, “About lap 30 or so, the car just wouldn’t idle down. Going into one or three, trying to get off the throttle, the thing it’s 3-4000 rpms. I got my foot buried through the brake, trying to slow it down. It totally wrecked my entry and my whole line I needed to run. The car was great up until the motor issues.”

Cicconi had clear sailing out front as Lichty, Perley, Ice and Lilje trailed as a rash of late race cautions would soon face the top five runners.

On lap 47, the Lane 97 hit hard in turn two, possibly from something breaking from the previous wall-brush. A flatbed was required to remove the 97.

Cicconi had a one-car cushion on the restart, which did not go well as the 21 of Witkum now went on the hook from a jumble toward the end of the field.

Only one lap was realized before Lichty’s 84 slowed almost to a stop in turn two thought to be out of fuel, but that was unconfirmed, bringing out the last caution and a shootout scenario between teammates Cicconi and Perley. But, it was Cicconi’s race to lose and he was up to the challenge as the two black Miller cars stayed one-two to the checkered. Perley laughed as he came out of his 11 in second, “I went easy on Louie there.”

The two Ohioans – Lilje and Ice followed in third and fourth with Ben Seitz picking up fifth in the Bien 17.

Said Ice, the 2012 teammate of Cicconi, “We did good at the start. Mike was better but he didn’t leave me. I kind of kept up and when Louie got by I stayed with him. But then I got stuck with the lap cars as they were running good. My goodness, gracious, the lap cars were tough tonight. That number 40 was just hard to get by. He’d give you room, but he was running so good. Once the leader went by, he picked up the pace. Other than that on next to the last restart, we ran out of fuel. I made it though and it was a lot better than last night. The car was very respectable.”

Ben Seitz, who had timed third fastest earlier in the day, was happy with fifth. “The car was really good. I need to thank my sponsors, Sam Lorruso and his family, my car owner Dickie Bien, my crew and Brian Allegresso who has done a lot of work for us this winter. We started 11th and toward the end of the feature the car was really starting to come alive. It was all because of him. We had a strong day, quick in the time trials, quick in the heat. We made so many changes to this car; it’s like a new one. We weren’t sure about the setup for the feature. We have some adjustments to make for next time, but the car was really good. Thanks to everybody who did a lot of work on this.”