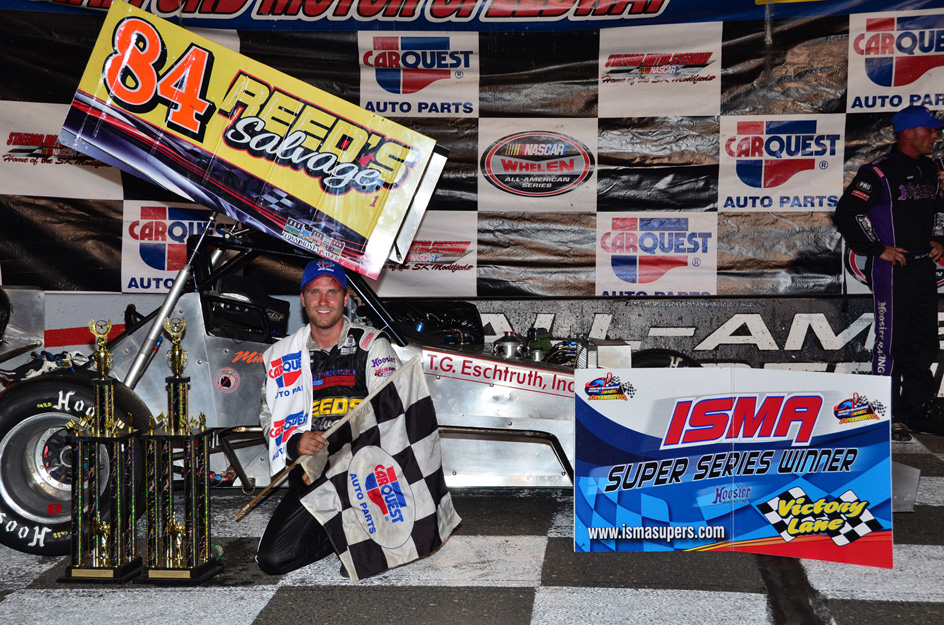 Stafford Springs, CT – Mike Lichty was one of the fastest cars among a very fast field at Stafford Speedway’s ISMA Carquest Super Saturday, but his luck has been on a bit of a roller coaster ride starting last season. So, when he drew a fourth spot in the feature lineup and knew he had a good car, it wasn’t a given that he’d be in victory lane at race end. But, this time he was. He grabbed the lead from Eddie Witkum Jr. on lap six and survived some intense pressure by an equally speedy Ben Seitz throughout the 50-lap event. It was his first of the short ISMA season to date and a career third in ISMA. Coming off an MSA win at Toledo a week ago, he now heads to Oswego and the King of Wings where he is defending champion. Lady Luck appears to be on the Canadian’s side for now.

Said Mike in victory lane, “I can’t thank the crew enough. We were decent here during the day. We made a few changes. After the heat race I knew we had a pretty good setup because we ran against some pretty good cars in our heat race. I felt good with the position we drew – fourth. The starting spot obviously helped but I felt we had a pretty dominant car tonight no matter where we were starting.

“I just have to thank PATCO Transportation, Reed’s Salvage, my dad Brad, Craig Reed, Dickie Lavati, Raven Reed – everybody. This is cool. I love this place. Facility-wise it is gorgeous. I just can’t thank Stafford and Carquest enough and especially the fans who came out to see us race.”

Another guy looking for a little help from that luck lady, Ben Seitz, was tacked to Lichty’s rear end most of the race, but just couldn’t muster enough to get by. He was still pleased with second. “For a while there I thought we had a chance to get Mike but he just had us beat. We were a little tight and Mike did a nice job. I’d like to thank my sponsor Cape Cod Aggregates, S.M. Lorruso and his family, Lorruso Heavy Equipment for supporting me. I’d also like to thanks all the fans that came to watch. And, especially I’d like to thank my car owner Richard Bien. He really built me a great car this year. I hope to keep running up front. The car is excellent. I’m excited for this season. Last year at this race we struggled a little bit. I’m pretty happy with the results this year.”

Rob Summers, who was driving for the 11 team that had five previous wins at Stafford and who owned a first-time win there in a Lane car, was smiling on the podium, “I can’t thank the Vic Miller crew enough and Ed Shea and all the sponsors. The car was just a little too tight tonight. But getting a third place and having the car in one piece makes us pretty happy. I got a couple wheels in the dirt coming around lap traffic and that was a little scary. It would have been two races in a row and I didn’t want that. I just have to watch that stuff. It’s really tight racing. Thanks to Carquest, Stafford, and all the fans who came out to watch tonight.”

Twenty-three winged ISMA machines were in the pits but early attrition trailered the AJ Russell 10, the Belfiore 98 and the Roger Perry 01. With the new redraw handicapping system, the top 12 from the heats redrew for their feature spots. Jeff Holbrook in a new Allegresso 35 owned by Howie Lane and Jeff Locke sat on the front row when the green fell. Eddie Witkum Jr., in the second row, jumped on the pedal and claimed the point as one was complete, but it was evident that Mike Lichty was determined to head to the lead which he took on lap 6.

A quick yellow flew on lap 8 when Jon Gambuti had a tire wobbling and headed pitside but the tire wanted to race and headed for the first turn. Several cars including Mark Sammut pitted under the caution.

Lichty was off on the green and two laps later Ben Seitz moved by Witkum for second. Summers, Holbrook, Jon McKennedy, Bob Magner, Johnny Benson and Lou Cicconi trailed but not by much.

Gradually the lead duo pulled away from the pack as the race went flagless for a long stretch. Just before the midway mark, things started to get interesting as Lichty and Seitz approached the tail cars and traffic slowed the duo allowing Summers, now third, McKennedy and Witkum to close the gap, but they had the traffic to face also.

Yellow flew with 15 to go as the slicing and dicing through traffic continued. Bob Magner, Jamie Timmons and Dan Bowes were involved in the caution. Jeff Locke made a pit stop during the cleanup as did Craig Rayvals.

Lichty and Seitz had one lap car between them and Summers and McKennedy on the green. Witkum stayed in fifth with Cicconi, Holbrook, Tim Ice, Timmy Jedrzejek and Jon Gambuti, the top ten.

With ten to go, Lichty began to pull away but the battle for second through fourth was a barnburner between Summers, McKennedy and now Cicconi.

At the checkers, the top four of Lichty, Seitz, Summers and McKennedy had tightened up while Cicconi ran alone back in fifth.

McKennedy, who is picking and choosing between ISMA and his modified ride this season and had been clocked at a 16.2 second lap earlier in practice, said, “It was a decent finish fourth for the first time out here racing the car. I was a little disappointed because we had a rocket ship all day. I kind of dialed myself out for the race. It was way too tight. Next time it won’t happen because now we have some notes for the next race. Hopefully things will work better for the next one.”

Cicconi, fresh off a dominant win at the ISMA opener at Waterford, commented, “It was an okay race. The motor was real flat tonight and I don’t know why. I have to figure that out. I started to catch up toward the end there but not enough.”

Notes.. Mark Sammut, Johnny Benson Jr., Mike Ordway Sr. and Eric Lewis exited the race early all with mechanical problems. .. The next ISMA outing is the King of the Wings at Oswego on July 7 with the annual Old Timers Reunion taking place earlier in the day.