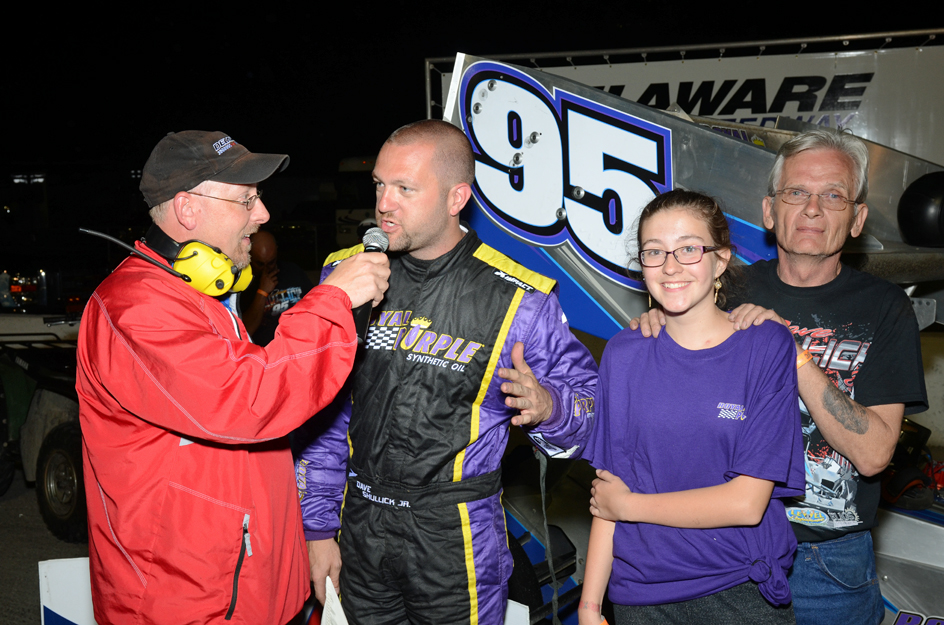 Delaware, Ontario, Canada – To say Ohioan Dave Shullick Jr. has mastered the half mile at Delaware Speedway would be an understatement. Friday night Shoe II took his Bodnar-built 95 to a third consecutive victory there dating back to ISMA’s opening day, 2015. His fourth career win, and initial one, at the famed Canadian oval came on August 9, 2009. Shullick started 12th on the field of 19 ISMA starters and overtook race leader Timmy Jedrzejek on restart of lap 30 of the 75-lapper. He was able to stave off several challenges after that and then set the 95 on cruise. The winner of last season’s Harv Lennox Memorial two-race series, was on his way to a possible repeat.

The North Ridgeville driver said in victory lane, “I just love coming here. It’s close to my home and I love to drive this track. The car was just amazing tonight… just unbelievable. I could take it anywhere and do anything I want with it. Late in the race I was just cruising just trying to click off the laps. I am very fortunate to drive this car. This car really goes good here. I have to thank the crew, Royal Purple Synthetic Oil, Elios Financial Group, and Level Performance. Now we’ll take a few weeks off and hopefully get our other car together and the new motor together so we’ll be ready for Lorain County.”

Fourth place starter Tim Jedrzejek who one day earlier had visited the hospital with a painful kidney stone, finished second after Danny Shirey, who led and then held the runnerup spot, pulled suddenly off the track with less than 3 laps to go. Timmy, inheriting second in those waning laps, commented on the race.

“We’re happy. Congratulations to DJ and the whole 95 team. We had a fun race. It was fun racing with Mikey Jr. in the 61- we had a good time out there. The second half of the race seemed to click by so fast I was surprised it was over already after those cautions in the first half. That’s what hurt us; the cautions. We couldn’t get going for about three laps and then we’d get some speed and was able to catch the 49 there at the end five laps or so. He looked like he was slipping and sliding around and we got by him. Congrats to Danny on a fine run. They are getting stronger every race it seems like and their day is coming. I’m happy with the whole Dr. Mom Says School is Cool, Enerco Mr. Heater, Harrington Trucking sponsors on this car. The whole Lane crew did a great job tonight.We came here with the same setup as last year and it showed. The car was comfortable all day long. It will be a much better ride home today than it was last week leaving Oswego. And, considering yesterday I was laying in the hospital thinking I might not race at all, this is definitely better.”

Probably the proudest driver with his podium finish was Mike Ordway Jr., who is living a dream. The second generation driver was announced the pilot of the Booth 61 late last year – a ride his father occupied over the course of many seasons. “The car was good all day. I have to thank Clyde and Susan Booth. I’ve been waiting for this opportunity for a long time. So I have to thank them. I have to thank my father, Ed Page, Richard Hathaway, Larry Jefferson and everybody who has made this possible for me. We struggled a little bit the first race at Oswego. To come back in just the second time in the race car and finish third is pretty awesome. I also have to thank Bob and Ellie Harrington. They have been with me forever and everything helps for me. I have wanted to drive this car for a long time and finally I get to so I’m going to make the most of it. A lot of people say I have big shoes to fill following my dad in this car.”

Eddie Witkum and Shirey led the way to green for the second ISMA feature of 2016 and it was Shirey who took command followed quickly by Timmy Jedrzejek and the pair of Ohio drivers took off from the rest of the field. On lap eleven Jedrzejek took the lead from Shirey but minutes later Oswego’s new track record holder and winner of the Jack Murphy Memorial, brought out the yellow with a broken driveshaft ending his race.

Jedrzejek was able to fend off Shirey for many laps but lurking not far behind was the silver and blue 95 nicknamed Ice, picking his way toward the leaders. By lap 23 Shullick had gotten by Shirey and set his sites on the 97 of Jedrzejek. The action right behind the lead duo heated up as Canadian Dave McKnight, fresh off a podium finish at Oswego had surfaced in third behind Shullick as Shirey and Eddie Witkum stayed close in the top five.

It was Witkum who finally slowed the action on lap 30 when he came around in between turns three and four. Dan Bowes parked the overheating 25 while Witkum got restarted.

When the pack came off four for the green Shullick drove by Timmy J for the lead, surviving a few more yellows and a red, before taking the win.

Lap 34 saw Witkum and Cumens both in the pits as yellow fell with both restarting.

Shullick took off again with Dave McKnight the second place man as Shirey and Jedrzejek battled behind with Mike Ordway Jr. getting into the mix.

Cumens finally parked her 39 on lap 38 setting up another shot at McKnight closing in on Shullick but to no avail. On lap 47, the great run of McKnight’s ended with a blown motor in turn one and red dropped for the cleanup.

This was the last stop of the race as once the green dropped Shullick put it on cruise with Shirey a distant second and Jedrzejek a couple car lengths behind the 49. Ordway began to work on the 97 as the race sped on with Mark Sammut, Tim Ice, Kyle Edwards and BJ MacDonald next in line.

As the counter clicked to 70, Shullick’s victory was pretty much a given, but Shirey now had Jedrzejek and Ordway tight on his bumper. Moments later the 49 slowed and pulled off the speedway moving Timmy J and Ordway up into podium spots as the checkered waved soon thereafter. Mark Sammut and Tim Ice rounded out the top five.

Sammut, who is campaigning a car he and his dad have been working on for a while and finished over the winter, said later, “Too bad we didn’t get it going better in the heat race. We had to come from a long way back. We were picking them off slowly and a little bit of attrition helped us obviously. Because a couple cars were definitely faster than we were that didn’t finish so that helped. We’ll take fourth anytime and just keep plugging. Hopefully things work out better next time.”

Tim Ice also was happy with a top five after damaging his car on lap 1. “Coming around for the start, I drove over the car in front of me and knocked the right front nose wing almost completely off. The car pushed a little bit but we just kept working hard. A few fell off and we passed a few and got back up into fifth. We had another really good run. I’m just as excited as heck.”

Rich Reid, who finished in the tenth place spot, was presented with the $182 prize from the Lennox family in honor of Harv’s 182 wins. Reid was honored by the presentation. “This is great. Never got so much notoriety for finishing tenth. But Harvey Lennox is a legend and any time you can get an award with that man’s name on it means a lot to supermodified guys, that’s for sure.”