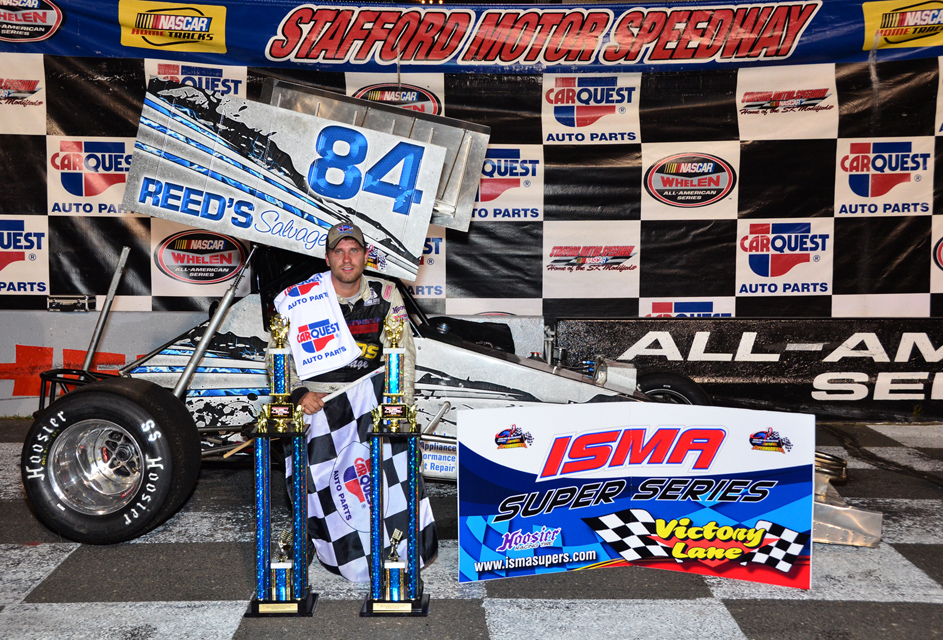 Lichty said in victory lane, “We were fortunate enough to win last year here and I thought that coming back here this year we’d have a strong car once again. We started out the day good. We were quick in hot laps and good in the heat race. I mean this was fortunate because we have been sucking lately, not because of the speed of the car. We then had a good starting spot on the outside pole. It’s tough starting on the front row because you don’t know what kind of pace to start. And, Louie totally scooped me and got me on the restart there. He just outplayed me. I knew he had a decent car so I just bided my time and waited for some traffic and just picked him off. This car was great here last year when Ben was pressuring me for the win and we ended up pulling away. This year too we were able to do the same thing. I just have to thank everybody on the crew, Reed’s Salvage, Patco Transportation, my father Brad, Craig Reed and everybody that works on these cars. They are a tough deal to house and what not. I also have to thank Carquest, Level Performance, Dickie and Ryan in the shop. They work hard and give me a good piece.”

Not an unusual face on the podium at Stafford, Chris Perley commented on his second place. “Second and third for the team is another good top three for the team. I can’t believe it. It’s just awesome. Any time you are on the podium is fun. Nobody was going to catch Lichty tonight. He was in another time frame. It was fun to watch Louie and Mike go at it there. I was in the catbird’s seat hoping they didn’t wreck, but hey, if they did I might have come out with the win. I’m happy really that nothing happened. They raced each other clean. As far as this car we’ve been rubbing on this new one and it’s starting to go the other way and I’m happy. I’m always happy with Vic’s cars anyway but when new cars come out you get to play with them. It was a fun night. Fun to come to Stafford. Fun to be back. And can’t wait to come again! Now it’s back to Oswego.”

Perley’s teammate who raced back hard with winner Lichty until Perley got by, Lou Cicconi, said afterwards, “The car was really good at the beginning. Then something started going bad in the motor. It was breaking up. But, I still managed a third which is really good. I was happy with that. I was lucky to get here.

Dan Bowes and Mike Lichty held the front row when the green dropped on the 50-lap ISMA Supermodified feature event, Mike Lichty got a good run in the outside groove to take the lead at the start of the race. Lou Cicconi, who started the race in 9th, was absolutely blistering his way to the front as he moved into second place on lap-2. Polesitter Dan Bowes was third, with Rob Summers and Tim Ice was fifth. The caution came out with 2 laps complete for debris on the backstretch.

Back under green, Cicconi smoked past Lichty to take over the lead. Bowes was third, with Summers fourth and Chris Perley got by Ice to move into fifth place. Perley made a move to get by Summers for third on lap-6 but he had a lot of distance to close down to Lichty and Cicconi at the front of the field. The caution came out and erased Cicconi’s large lead with 15 laps complete for Justin Belfiore, who came to a stop in turn 4.

Cicconi took the lead on the restart, but Lichty was all over the back of Cicconi’s car. Lichty made the pass for the lead on lap-17 with Perley right behind the lead duo in third place. Summers was in fourth, just ahead of Ice, who was back up to fifth place. Just as Cicconi had pulled away from Lichty on the previous green flag run, Lichty was now pulling away from Cicconi and Perley once he was out front. Lichty deftly navigated lapped traffic and wasn’t losing any time as he made his way through the back markers.

With 20 laps to go, Lichty had built his lead up to over a full straightaway on Cicconi and Perley. Summers continued to run in fourth place with Tim Jedrzejek in fifth. Lichty’s big lead was erased by the caution flag, which flew with 32 laps complete for Jeff Locke, who spun in turn 4.

Lichty got a dazzling restart and immediately opened up a gap over Perley, who worked his way by Cicconi and into second. Jedrzejek was fourth with Mark Sammut behind him in fifth. Lichty led the field to the checkered flag in dominating fashion to pick up his second consecutive ISMA Supermodified victory at Stafford Speedway. Perley finished second, with Cicconi, Sammut, and Jedrzejek rounding out the top-5.

Fourth place finisher Sammut was more than pleased with a fourth after a self-made fiasco at Chaudiere the previous weekend. “The car was decent. Not as good as the 11, 71 and 84 obviously. They were definitely faster. As the race went on the car kept getting better and better. It was loose at the start. I thought I was catching Lou a little towards the end but he was faster in the corners. You have to hand it to those guys. Those cars are on a rail absolutely all the time at every racetrack. Something happened to the engine there. I was only gaining on him in the straightaway. I was able to get alongside of him on the white flag lap, but not to get by. Maybe in a couple more laps I could have. But, it was nice to have a good run after the driver made a huge mistake last weekend in Quebec, taking us out of the race with five laps to go. It’s nice to know we had a race to be able to redeem myself a little. Now we’ll get her together for Oswego and hopefully find a little more speed in it and go from there.’

Timmy Jedrzejek rounded out the top five in the Soule Racing 32 and had these comments, “It was a good night for us. We’ve been struggling a little bit this year. We haven’t been able to quite get the set up for feature time like we wanted. We’ll take our fifth place tonight and go home to work on it. I feel respectable. I don’t think anybody out there had anything for the 84. Congrats to Mikey for winning this for the second year in a row. Hopefully we can build on this and go to the King of Wings in a couple weeks, keep the momentum going and finish a little better than fifth.”