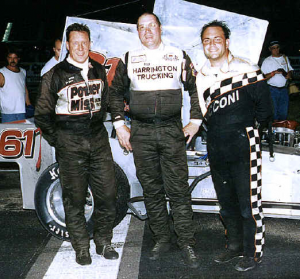 Nelles Corners, Ont. – A huge crowd of fans showed up to watch the venerable Tony Stewart return to his open wheel roots to match wits with the best of the east in supermodified racing. While Tony’s car failed him, his talent did not. It showed with every move he made on the track. With less than ten to go, Stewart pulled the ill-handling Lichty 84 into the pits. “It was way too loose,” said teammate Dave McKnight later. “He just didn’t want to wreck it.” Out front the battle was hot and heavy between Mike Ordway and Lou Cicconi while it lasted, with Ordway taking the point just prior to Stewart’s demise. Once out front, there was no catching Ordway in the short time left. The win was Ordway’s first on the 2002 ISMA trail, making him the sixth different winner in seven outings.

The race was slowed or stopped for two lengthy track cleanups allowing for less than perfect race conditions for most. Ordway commented in victory lane, “It was a good race. It was good for us. The car was really working good. There was a lot of speedy dry out there. At the end the car really hooked up. In the long runs, I think it was even better than it was at the start. I got up beside Lou there coming off four to make the pass I got a little wobbly there and we almost touched. I saw that he was slowing down a bit so I tried

the outside and hoped it wasn’t too slippery out there. It worked. It was a good one for the team.”

After a side-by-side fight down the front stretch for the lead with Ordway, Lou Cicconi fell into second where he finished. He wasn’t unhappy with the result.

“It was a good race,” said Lou.. “I wore out my car, especially near the end.. I knew Ordway was there. I was getting signals from the crew. I tried to drive nice and smooth and consistent. But I knew it was a matter of time, especially when I started getting loose going through the corner. He came up alongside and finally I had to back down. I had no choice.” The hair-raiser came for third place when coming off four at the checkered, a

heavily sparking Joe Gosek dove down low around a lap car while Chris Perley headed high. A tape replay later showed that Gosek nosed out Perley by about a tire width to take third. Gosek, who was running on a flat tire, was lucky to even be there.

“We were battling at the end there for second,” said Gosek, who holds multi-feature wins at Cayuga.. “I tried to get Cicconi and I clipped a lap car down there on the bottom. It knocked the tire off. I was surprised we made it to the end. It was flat on the wheel. I knew it was and I had to be careful going into the corner. That’s when it really was bad. I kind of

bonsaied out there, but with one or two laps left, you have to take a chance. We just weren’t as good as we’ve been here in the past. Mike and Lou were on the money. I guess Chris and I were really close there at the end. I couldn’t see it.”

Perley, coming off a win at Berlin, had been up to as high as second momentarily in the waning stages of the race. “I had second for a minute there. We went into the corner and I started to go around Cicconi. There was a lap car and then Martel stopped there I had to go high all of a sudden, where you didn’t want to run because the track was in such fine shape. It was one groove racing. We finished fourth, although it was a close one at the

end, but I felt we had a second place car. Probably not enough for Ordway, but I’m happy.It was a long race. It felt like the last day of school – like it would never end.”

The fans had come to see Winston Cup star Tony Stewart run with ISMA and he didn’t disappoint. Stewart, whose car was handicapped just like everyone else’s, started fifth in his heat next to Mike Ordway and ahead of Scott Martel. He was into second in two laps and chased Joey Payne to the finish. McKnight and Cicconi took the other two qualifiers. Ken Bell reported ofn with a blown motor after a great second place run to Cicconi. Brad Lichty flew the only yellow of the qualifiers when a broken axle sent him into the

wall and his crew scurrying to get the 74 ready for the feature. Canadian Wayne Litt grabbed the early lead, but Aston, PA’s Cicconi wasted no time in taking it away.

Yellow flew on lap 4 with Doug Kells taking the 38, out for the night. On the restart, Joe Gosek, glided into second, while Payne, Ordway, and Tony Stewart pushed Litt back farther.

Cicconi was putting cars down a lap by the 10th circuit, but Gosek was also closing in as Cicconi maneuvered by the slower cars. Joey Payne ran alone in third with Ordway pressured by Stewart.

Lap sixteen was the black mark of the race when yellow flew for the 16 driven by Jim Shirey. Shirey tapped the wall in two and was able to get in for repairs. Fluids laid down on the track changed the yellow to red for cleanup. Several cars pitted including Stewart, his teammate Dave McKnight, Jamie Letcher, Greg Furlong Charlie DiRosa and Paul Hosie. Most returned, including Shirey, who two laps later, promptly laid down a double stripe of oil all around, sending the speedy dry truck out once more. A hole in the oil filter was the culprit.

2001 Oswego champ Greg Furlong continued his bad luck string with power steering problems ending his night soon thereafter. Finally on lap 20 things got green. Cicconi had Ordway to contend with now as Mike stole second from Gosek on lap 18. Stewart, who had come in for adjustments, was taking the field by storm once more and was up to eighth. Things weren’t going well for the Lichty team, though, as Lichty pulled in the 74 on lap 24 to end his night. Unfortunately, Dave McKnight had a water line go on the 94 several laps later, and he joined Lichty in the pits. The hopes of the Lichty team now rode with Tony Stewart.

With twenty to go, Cicconi still held command, but the boys in the back were ready to move. Ordway, Gosek, Payne, Perley, Wood, Martel and Stewart were just waiting for the time to move.

Lap 36 offered the time. Jamie Timmons took the 27 into the wall hard with a double-hook needed for his badly damaged car.

On the restart, Wade Litt spun off the front straight, but was able to correct and continue.

Both of these slowdowns, allowed Ordway and company to catch up to the flying fluorescent 75. On lap 40, Ordway put the 61 alongside Lou going into four. Dust flew, but the pair never touched as they raced down to one. Finally, Lou backed out, and the lead was Mike’s. Moments later, without fanfare, Stewart pulled the 84 into the pits, not able to match the intensity of the battle with a too loose car.

With five to go, Ordway was out of reach, but second was anybody’s prize as Cicconi, Gosek and Perley all wanted it. Russ Wood sat right behind the trio, just waiting for a mistake that never came.

At the line it was Ordway, Cicconi and a flat out finish by Gosek and Perley. Wood settled in for fifth. He said later, the cautions had hurt his chances. “Things were really going good until the track got oiled down. Then, I lost my momentum. The car seemed to change. The track wasn’t in too good a shape. I just couldn’t do anything, so I ended up fifth.”