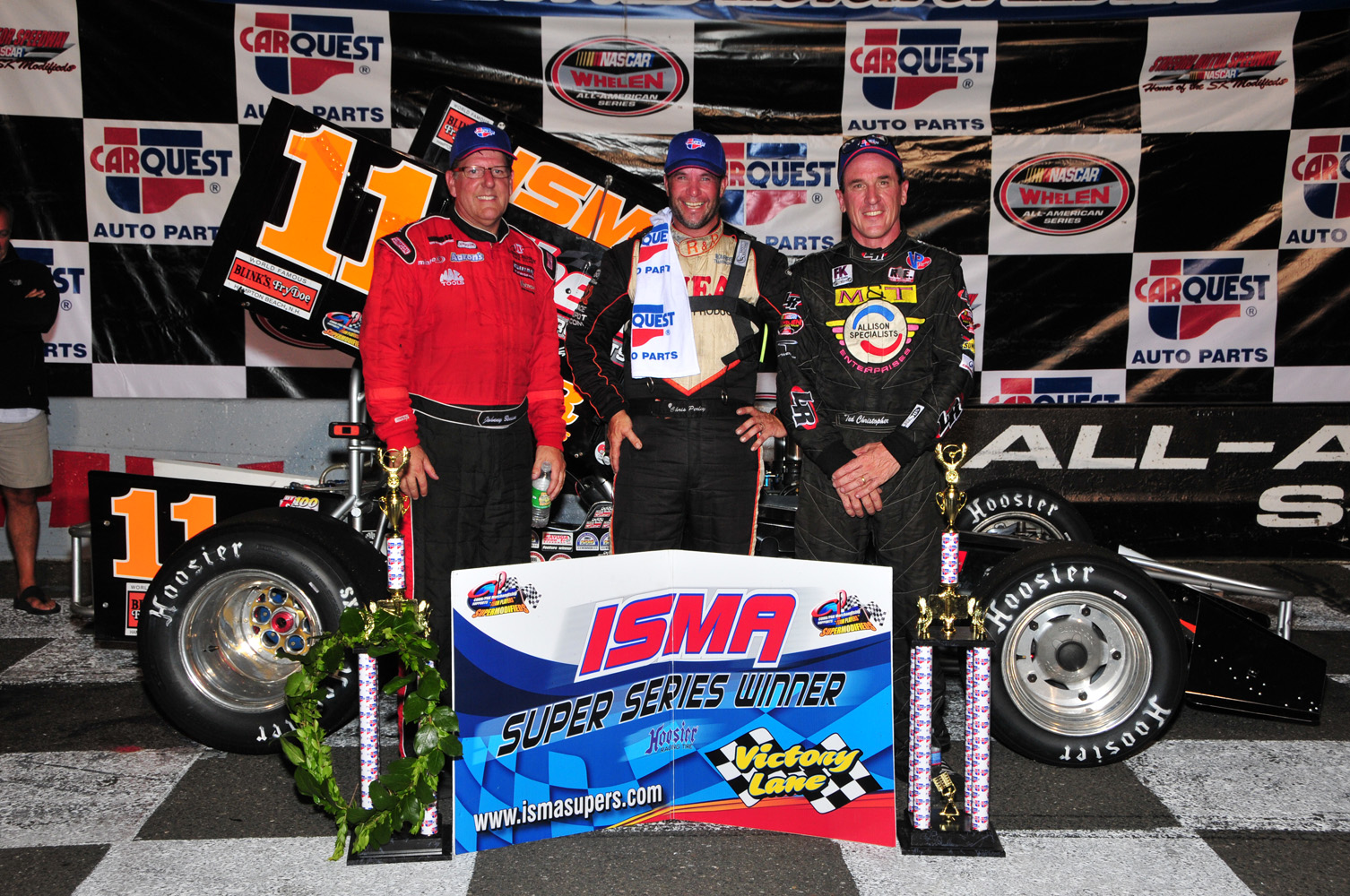 Stafford Springs, CT – June 28: Winning at Stafford for ISMA All-Time win leader Chris Perley wasn’t all that unusual at the Xtreme Tuesday 50 as he had done it four times before starting with the first event in 2004. But, beating out the winningest series driver at that famed oval, Ted Christopher, added a little more excitement to the victory. Perley started in twelfth spot and gradually picked his way up to Christopher, who started on the pole due to handicapping. TC’s main competitor almost from the start was Johnny Benson Jr. who like Christopher, has decided to run most of the 2011 ISMA season. But, after the sole caution of the race, it was Perley who would start knocking on the door of the Christopher driven 61. With less than ten laps to go, as the duo faced some fast traffic, Perley dove around Christopher for the lead. The 50-lap race had flown by in under 19 minutes with one yellow dotting the lightning quick pace. And, most of the duration there was tight racing all over the track.

Perley said in victory that as usual the race was a blast to drive as he described the lead pass. “I got lucky picking the right lane and stuck with it. I tried the bottom and that didn’t work. I figured my car wasn’t great on the outside, but the bottom was blocked so I had to go somewhere else. And, that’s how I got by. This was a fun race tonight. Winning a race on the last lap is fun. Winning a race lapping the field is fun. And winning a race by passing Ted Christopher is fun. Passing anybody in good clean racing is fun. With it being Ted, it puts the icing on the cake. This win would rank right up there as being a great one for me.”

“I feel comfortable in the car and that makes me comfortable racing it anywhere we go thanks to my car owner and crew. A lot of tracks have one and a half grooves, Stafford seems like it has three grooves that you can use. From the apron to the bottom to the outside – wherever. It makes the car more forgiving. If your car changes, you can still change your line racing. You can still stay in the hunt. We have a blast here. We may be off sometimes but still can have a solid top five run.”

Christopher, with only a handful of supermodified races under his belt ever in his long and illustrious career, admitted he was new to this competition.” It was a good race but it wasn’t where we wanted to end up. More than anything, it’s not knowing the lap guys. I don’t know the people I race with in this division yet. I sort of wish they would use the passing flag, but they don’t. Tonight I learned something about what I have to do and where I have to go when I get to those guys. I watched how Chris did it. He’s the master at it but I will beat the master before I’m done!”

Perley actually countered that Ted has a bit of an advantage in this particular race. “In tonight’s race knowing lap cars was not an advantage. Ted was getting through the cars first and they were changing lanes. After he passed a lap car they don’t know if I’m behind Ted or not. Tonight I couldn’t just dive bomb wherever Teddy went. There was a couple times he actually gained ground on me in lap traffic because a car would change direction and I’d have to do completely different things. In some cases it pays to know the lap cars. Tonight was not the case. You couldn’t just blow by them. They were still running fast.”

Third place runner Johnny Benson Jr. was content with his third after challenging for the lead and possible win. “It was a good race. I started sixth and I got up to second there. We were just starting to put a little pressure on Teddy and then the caution came out. I kind of didn’t feel like I was in the track very good after that. It took me a while to try and catch up. Then Chris and Teddy got into lap traffic and I started to catch them but I couldn’t do anything with them – maybe with Teddy if I was able to get up to him but I wasn’t as good as I was in the first half, decent but not quite as good.

“I have to thank Brad and Mike Lichty and PATCO Transportation for giving me the opportunity to come do this and all the ISMA people. I tell you they are just great. To come to this Arute-owned track with such a great history is a real pleasure. I really enjoy this race track. It’s a great track and has great fans.”

The 50-lapper started with Christopher and Dave Duggan on the front row but Christopher, after a dnf at Waterford, wanted to race and pulled the Booth 61 out front immediately. Johnny Benson moved quickly to second passing by Bob Magner and the 61 and 74 pulled away from a Magner – Mike Lichty battle as Chris Perley glided up to fifth by lap 10.

Benson was really pressuring Christopher just prior to a lap 22 Jamie Timmons spin that flew the race’s only yellow just as the lead duo was greeted by some heavy traffic.

As the 2010 Seekonk winner stated, Benson lost momentum after that restart and never really regained it. Within two laps Perley was by Benson and heading for Christopher. Now the two masters in different race divisions became the focal point for the remainder of the race while battles set up behind between Benson, Wood, newcomer to the track, Timmy Jedrzejek and Mike Lichty.

Christopher and Perley met with a very racy crowd of Dan Lane, Eddie Witkum Jr. and Ben Seitz ahead just shy of the 10 to go mark that had the crowd holding their breath on every move. Perley tried inside and out on the 61 as TC tried to get by Lane and Seitz after passing Witkum. Finally off turn four with seven to go, Perley picked the lane and passed around Christopher and Seitz as Lane still remained ahead.

The lead duo of Perley and Christopher broke free of traffic by lap 48, but it was too late for TC to catch the Rowley Rocket. Christopher, Benson, Jedrzejek and 2010 ISMA champ Russ Wood completed the top five.

Timmy “J” was more than pleased with his finish after a bad inaugural ride at Waterford in the Soule 32. “This is redemption I guess after Waterford and feeling lousy leaving the track after what happened. This feels nice to reward these guys after all their hard work with a good finish. The car didn’t start out real good, but it started picking up. We just kept coming and consistently started knocking a car off here and there. When up to fourth I thought I might have a shot at Benson. We came into lap traffic and it just got bobbled up. I didn’t want to throw away what we had and I didn’t want to do anything silly and cost either one of us or a lap car a good position. Benson got the run on the outside and cleared the car before I did so I let him go. We’re pleased to go home fourth and congratulations to Chris and the rest of the gang who finished top three. This is the first time I’ve seen this track and only the second time I’ve run with these guys and I couldn’t be more pleased with the results. These guys are A-1 with their preparation with the car. It’s my job to steer it and give some input on making it go faster. I don’t have any complaints about the workmanship on this car. It’s second to none.”

Russ Wood commented after his fifth place. “ I might have had a third but I don’t think I made the right choices in lap traffic and I fell back a little bit. All in all we weren’t bad but Chris and Teddy were awesome. We were close but just ended up fifth. We’ll take it. We’re in one piece and this is certainly better than Waterford. Hope everyone is happy with this one and we’ll move on to the next race.”

Mike Lichty, Joey Scanlon, Justin Belfiore, Bob Magner and Rob Summers finished up in the top ten in a very competitive race that saw a majority of the starters still running a the end when the checkers flew just after 9 pm.