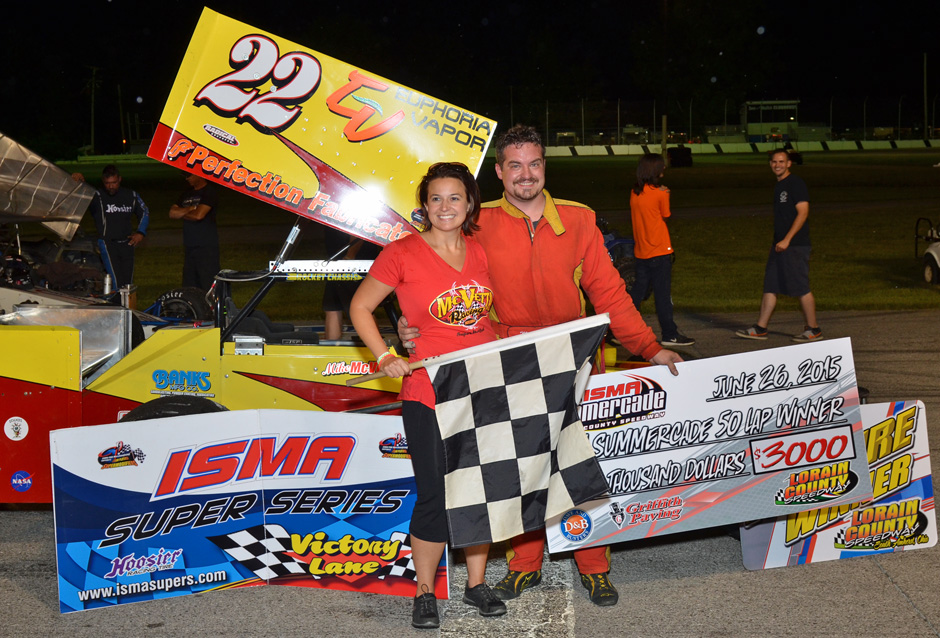 Lorain, OH — Thirty-one years ago the International SuperModified Association ran their first race event at Lorain County Speedway. The 22 of Doug Saunier of Navarre, OH was the winner of the 1984 100-lapper. Fast forward to 2015 when ISMA returned to Lorain County and saw young NASA engineer Michael McVetta win the Friday night 50-lapper, driving his 22 to a career-first victory. McVetta, ironically just happens to be Saunier’s son-in-law. It was all the more rewarding for McVetta who had crashed heavily at Oswego Speedway on June 13 and was nursing an injured finger from the incident.  Unfortunately, McVetta also saw is first victory marred at race end when a broken watts link sent him into the first turn with a damaged car.

Getting a lift to victory lane as his car went on the hook, McVetta was all smiles despite the fact he faced another major repair session,  as he spoke, “This is unbelievable.  I want to thank all those who stepped up and helped us get back on track.  There are so many to thank. Acme Racing gave us a big hand and gave us a rear end. Euphoria Vapor came over one night at ten o’clock and helped us set up the car. The Fourth Turn Crazies; they are always there for us. I can’t say enough about Dave Ennis and his family. They do everything for us. Thanks to Ridgeway photos. Thanks to my family, my sponsors and friends. I can’t thank them all enough. I couldn’t do this without them.”

Rob Summers, who might have garnered a win had things played out differently said,  “I thought I had it for sure there. The twenty-two did what he had to do. He kind of put me toward the wall one time and toward the infield another. I could have probably put my foot into it but we would have probably had two wrecked race cars. For us to get a second place is good because the beginning of this year has been tough for us. I’m happy for the whole team.”

Dave Shullick Jr., who started back in fourteenth commented, “I  just started a long way back. I had a good car. I learned a few things tonight about where the track wants us to run. If we race tomorrow, we’ll be pretty good.”

Despite some ominous weather forecasts for the weekend, Lorain County Speedway was able to finish their planned activities just prior to a light rain beginning to fall.

Twenty-five ISMA supermodified competitors filled the pits hoping for the chance to finish at least the first of the two-days of racing scheduled. Time trials were won off without a hitch as Canadian Mike Lichty broke the existing Lorain track record with a 11.798 lap. Dave Shullick Jr and Rob Summers were also under the previous record of 11.858 followed by Otto Sitterly and Timmy Jedrzejek in the top five trialers.

Danny Bowes, McVetta and Danny Shirey won the qualifiers as the program moved by at a rapid, uninterrupted  clip with rain showers looming not far away.

Just prior to the start of the ISMA feature Dave Shullick Sr was honored as the winningest driver in Lorain’s history with the dedication of the new Clubhouse on the backstretch named after him. Saunier was also interviewed as the last ISMA winner at the speedway.

The 50-lap ISMA event hit the track running just after 9 pm with McVetta and Dave McKnight leading the 25-car field to green.  McVetta immediately took control and never really was threatened despite several skirmishes that slowed the event with yellow flags.

Jeff Locke brought out the first flag on lap 3 and was the first race casualty followed by Rich Reid in the 48 and Charlie Schultz in the 71.

Yellow fell again in lap 13 when Moe Lilje, driving the Vic Miller 11, came around in turn two. Moe took the 11 pit side and out of the race. Tim Ice was also called in at this juncture for leaking fluids and he too, declared ofn.

On the green, the yellow and red 22 gunned it and pulled away from Stephens, McKnight, Summers, McKennedy, Shirey, Shullick, Seitz and Timmy Jedrzejek, the Oswego winner on June 13.

McVetta put the 5 of Kevin Jaycox Jr. down a lap on the 22nd circuit and gained some real estate and Stephens and the others battled by the 5 as the halfway mark approached and passed.

On lap 29, the 39 of Alison Cumens, who had also met with the foam blocks at Oswego on June 13, spun trying to get by the 5. Just as the green flew, Shirey was nudged out of sixth place and into the infield.

McVetta, after each yellow was able to pull away from Trent Stephens as McKnight held off a charging duo of Summers and Shullick. Summers moved into third on lap 33. One lap later Alison Cumens again flew the yellow in turn four and restarted at the tail of the field.

The final slow down came on lap 36 when the 77 of AJ Lesiecki drove into the infield and back out, still seeing the flag unfurled from the starter.

With McVetta seeing a career-first victory just 13 laps ahead, he once again gave it his all as Summers and Shullick hounded Stephens who still held second. On lap 38 Summers made his move around Stephens as Shullick also came by for third.

With ten to go, Summers was definitely closing on the 22 with Shullick tacked right on his rear.  McVetta now was holding on for dear life as the five to go was given and the 5 of Jaycox was about to create an obstacle for the 22 as Summers and Shullick were applying all the pressure they could muster.  Stephens lost fourth to Shullick’s teammate Otto Sitterly shortly thereafter. McKennedy also moved by the 19 in the waning laps.

With two to go, the 22, 74 and 95 were nose to tail, McVetta was able to gain a couple feet as the white flag well. As the checkers fell for McVetta, the crowd gave its approval at the newest winner, but the drama wasn’t over quite yet. McVetta’s 22 was stopped just off turn one as flames erupted from the car. He was out of the car in an instant and quickly rolled to extinguish any possible harm.

Summers and Shullick finished second and third with Sitterly and McKennedy rounding out the top five.

Sitterly, coming off two non-winged wins at Oswego the previous week, one a dead heat, had this to say about his fourth place.  “It wasn’t too bad of a run. The car was pretty tight. It got a little bit better when we were in an open track, especially if I was behind other cars. It was just pretty tight most of the race. It was a really tough place to pass. I talked to Dave (Shullick Sr) earlier in the night and he sort of told me a couple lines to run. I tried a couple of things he told me. And, more than anything some of the guys just didn’t come off the bottom. Once DJ went around and showed me the outside, I learned from what he did and was able to make a few passes on the outside.”

Jon McKennedy was not displeased with fifth. “We had a decent day. We pushed most of the race so it was tough to maneuver but overall it was a good day. It’s a tough little place. The car has to be turning just right to be able to pass.  We’re in one piece and have a top five. Hopefully we’ll get it in tomorrow.”