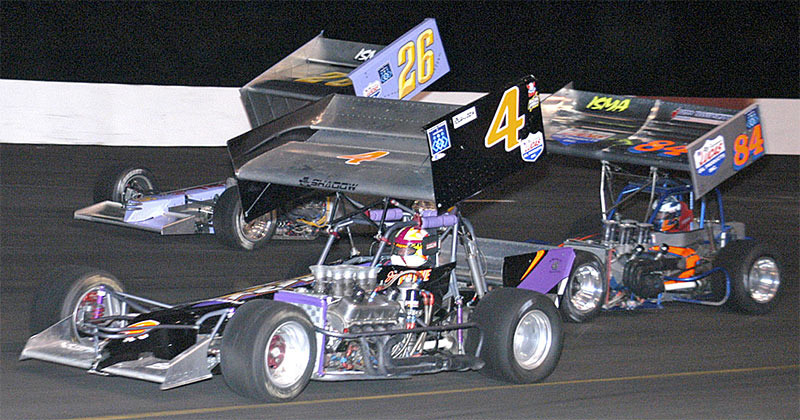 Jennerstown, PA – 2003 ISMA champ Chris Perley said recently that he loved Jennerstown and he hoped it loved him back. Saturday night the ISMA Lucas Oil/Helping Hands America Super Series returned to the fast Pennsylvania oval for the first time since 1999 and it reciprocated his admiration. Perley took over the lead on lap 15 from Joe Grunda and wasn’t really challenged for the next 35 laps on his way to victory. Blistered tires were a worry for all the ISMA competitors on the recently paved oval, but the Vic Miller 11’s shoes actually just wore away instead. It wasn’t enough to slow the Rowley Rocket, however, as he came home a healthy distance from second place finisher Timmy Jedrzejek. It was Perley’s second win at the Pennsylvania half-mile. PHOTO PAGE HERE

Said Perley after the race: “Everyone was worrying about blistering tires. In practice we were real good, but we went out in our heat and blistered a tire – everyone was doing it. This is our first win of the year and the guys worked really hard for it. We got hit at Toledo last week and had a so-so finish at Sandusky. To come back and win is great. This track is pretty quick. I think a harder tire – a 60 instead of a 50 – would be better for us here. With four laps to go, the car started to vibrate. We tried not to go too hard most of the way, but the last ten laps I went as hard as I could because I didn’t know how good I’d be at the end. When I got the sign that someone was closing, I pulled away.

“This place is awesome. There is so much room to race here. It’s a great facility and a nice smooth track. I love it here and it’s great to come back and win. Last weekend was a little disappointing; it’s good to get going again. The crew did a great job. Little Freddy, our mascot, came to bring us luck tonight and he did. I’d like to thank my sponsors Shea Concrete, R&R, Perley’s Marina, New England Motor Racing Supply, Barrett Transportation, Hardy Transportation and Jack Cook Enterprises.”

Ohioan Timmy Jedrzejek was the only driver to get within range of the high-flying Perley who still holds the official track record at Jennerstown. And, it took the last of his rubber to do it. “It was a tough night with the tires. I think everyone knew it was going to be a survival after what we went through in the heat race. I conserved early on and watched the guys ahead of me with the sparks flying from the heavy fuel loads. It was pretty interesting. I waited until the last fifteen laps or so – after that last caution and then I motioned to the crew that it was time. I was sitting around tenth place and the rest of the guys were gone. We got up there pretty quick. Some of the guys who had gotten by me early, I got back. We had a little bit more left than most of guys near the end and I thought I might be able to catch Perley, but I think he got the sign that someone was coming and he started checking out. Then I went into a survival mode because I was starting to slide. I was just watching the board, counting down the laps and we made it to the finish. The Enerco/Mr. Heater May Motorsports team did their job tonight. The crew really worked as we made several changes during the hot laps, after the heat and even before the feature. They earned their keep tonight!”

Current point leader Pat Abold, who had driven in from his daughter’s high school graduation just before the heat races, was content with third. “I waited for quite a while because I blistered my tire pretty bad in the heat race. I didn’t know what it was going to do in the feature so I kind of cruised early. I was hoping for a top three tonight and that’s exactly what we got. I didn’t know what to expect with the blistered tires. It turned out all right. When you’re racing for points that’s what you have to do – just keep putting together good, solid finishes. And, that’s what we’re doing.”

After a moment of silence for Randy Witkum who lost his lift in 1999 at Jennerstown, a pair of Ohio drivers – Larry Lehnert and Joe Grunda led the 24-car ISMA field to green with first Lehnert and then Grunda taking the point. Grunda was in the lead on lap 12 when the first yellow flew. It was for Russ Wood who brushed with another car and hit the cement wall hard going into turn three. Wood’s 29 had to be flat-bedded off the track.

On the restart, Grunda still held the lead but Perley, who had been sitting third, jumped Joe out of turn four and set sail leaving Grunda, Rick Wentworth, Nokie Fornoro and Scotty Martel, in the Lane 9, behind. Coming on strong was Joey Payne, who had started last due to a tire change prior to the feature.

Just before midway, Larry Lehnert’s 92 spun and was clipped by the 8 of Justin Belfiore, ending the night for both.

Perley was gone again on this restart as Grunda still held off the pack of now Payne, Jedrzejek, Abold, Fornoro, Wentworth and Randy Ritskes. Just before lap 30, Fornoro took the Helping Hands America 32 into the pits with a possible motor problem.

With 20 to go, Jedrzejek made his move on Grunda while Joey Payne and Abold were battling right behind the racing attorney. But Perley was well out front when Timmy moved into second.

Abold got Grunda for third as the race approached the conclusion and Payne, still moving forward from his 23rd starting spot, grabbed another spot from the 1 with less than ten to go.

Perley, who had gotten the message that Timmy J was coming, was well under the checkered when Timmy crossed for second. Abold, Joey Payne and Grunda finished up in their top five spots.

Payne, who arrived at the track without much help or extra equipment, was more than pleased with his run. . “We came to the race track with just the four wheels and tires on the car. That’s all we had. We didn’t have any spares. I borrowed a tire from Joe Petro; I have to thank him for letting me warm up on his tire. I borrowed a right rear from Bruce Budnick because we destroyed ours in the heat. We have a new set of shocks on this car – Shadow Racing Products. They built us a set of shocks and right before the feature the guy came over and told me to change the shock on the right rear and that was the key. That right rear is beautiful. I think we were one of the fastest cars out there. We started last and worked our way up but with about 15 to go it started skipping. The car keeps skipping every time we race. Toward the end it got worse and worse. We were right there though. I just have to thank everyone who helped us. It was just me and my father and we were just grabbing people as they came into the racetrack to help. It was a great night for a mediocre beginning.”

Stone Mountain, Georgia’s Joe Grunda commented after his run with the shaky tire situation, “It wasn’t a bad finish for having a wasted right rear. With forty to go I couldn’t even see going down the straight because the car was jingling so bad. You really abuse the right rear here. But I was happy with the run. We led for a while and got fifth. The car is coming around. Fifth is good, now we have four more to go.”

Note: Dave McKnight switched to Lichty 74 after a heat wreck in the 94 only to have rear end problems. Jeff Gibson, who also ran the WSOA sprint event, entered the ISMA field in the May 77.