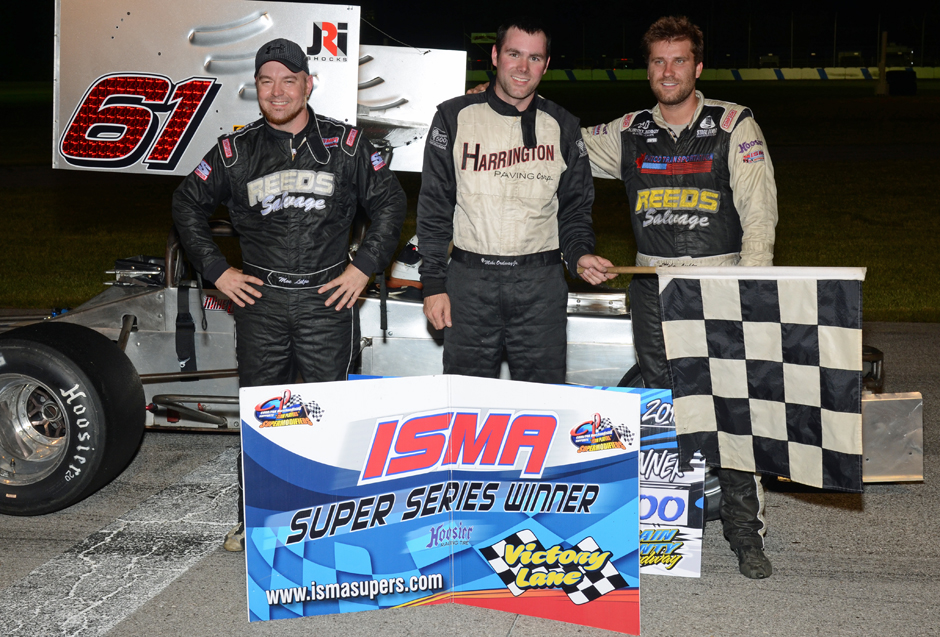 Lorain, OH – When Mike Ordway Sr. won the 1987 Thompson ISMA World Series event in the Clyde Booth 99, a ride he shared with Warren Coniam, Mike Ordway Jr. was just a twinkle in dad’s eye as the saying goes. In mid-summer 1988, Ordway Sr., solo driver for Booth piloted the 99 car to a win at Sandusky and a sixth in ISMA points. Dad was on his way to an illustrious career. That successful year closed with the birth of Ordway Jr. who was born Dec. 18.

Twenty years later, Mikey would get his first ISMA supermodified win at M-40 Speedway in the Rick Wentworth 10, but a dream had developed and persisted by then; that some day he would follow in his dad’s footsteps to drive for Clyde and Susan Booth. Last fall, the Booths were looking for a driver and as Susan related, Mikey had always told them “they had his number and to give him a call.” They did call and a new Ordway-Booth team was formed. Saturday night Mike Jr. brought home his second career ISMA victory and his first with the Booths. In only three races behind the wheel of the 61, Mikey had a win. His childhood dream had come true!

After crashing on Friday night, Ordway chased Lou Cicconi around the 3/8th’s Ohio oval for much of the 100-lapper, trying to get past. But, on lap 80, a bolt broke on the rear torque arm of the Jimmy Board-designed 76, and Cicconi was out of the race. Ordway took over and held the lead to race end. There was a joyful family and fan celebration in victory lane.

Ordway Jr. was quietly ecstatic as he spoke. “This is truly awesome. We had a good run. I talked with DJ and those guys before the race and we kind of strategized that it was a little different now from that race I won back in 07. You had to save a lot back then. Now the way the cars and tires are you get to the front as quick as you can and just hang on. Clyde and the guys gave me a really good car both nights. I have to thank them and Harrington Paving, Marollo Racing Engines and JRI Shocks. To race for Clyde Booth was a dream. To win for him is even better. This means a lot to me. With everything that is going on right now, this means a lot to my family too. It’s pretty cool. I’d also like to dedicate this win to Mario Fiore who passed away last week. I raced modifieds and he was a big supporter of any type of open wheel racing in the Northeast and a supporter of me anytime I saw him. I just want to remember him with this one.”

Moe Lilje had jumped behind the wheel of the Lichty 74, when Friday fourth place finisher Rob Summers had to compete at Riverhead Raceway in his Whelen Modified,. Moe did a great job to finish second.

“This was kind of a wing-it weekend for us and it turned out pretty well. We had some opportunities to get the win. I think if I could have gotten Mikey in traffic I could have held him off, but he had a better race car than I did. He made all the plays and I didn’t. So hats off to those guys. Mike drove a heck of a race. “

Lilje’s teammate for the night, Mike Lichty, was also running hard for that top spot. After a top five finish in the Friday night ISMA 50, Lichty came in a close third on Saturday.

Mike commented, “It was a good night tonight. I have to congratulate Mikey, Clyde, Susan and the whole Ordway family. It was cool to see them get this win. Mikey and I talked earlier in the season and he was kind of down on himself after Oswego. I told him ‘dude, look back at Clyde’s track record at Oswego with a wing. It’s not very good. When it comes to some of these shorter tracks, there is no doubt you are going to get a win in that car’. As far as our team goes, they did an a awesome job. We worked extremely hard many, many hours and it paid off. I have to thank Craig and everybody with the Reed’s Salvage team, Deanna, Raven, Carol, and obviously my father and Patco. We kind of have two teams, one in Ohio and one in Canada, and it all comes together as one big team. It’s pretty cool how we work together and I can’t wait until Oswego.”

Saturday’s ISMA field was decreased by two from Friday. Justin Belfiore , after a blown motor on Friday, had taken his 98 back to New England and Alison Cumens, after a stuck throttle the night before, had returned to her Pennsylvania home. 2015 Rookie of the Year Kevin Jaycox Jr. lost a motor in practice on Saturday leaving 22 cars to start the 100.

The hot afternoon began with qualifying and Mike Ordway Jr. and Dave Shullick topped the fast time trialers, the only two cars under the 12 second mark.

Handicapping put Lou Cicconi, in his first ride in the 76, and Dan Bowes in the 25, up front. Cicconi wasted no time in grabbing the point and was able to fend off all challenges until suddenly slowing on lap 80 with the breakage.

The early challenger to Cicconi was Trent Stephens pressured by Ordway Jr., who started 6th and Moe Lilje. By lap 20, that quartet was a distance away from Bowes, Danny Shirey, Lichty, Dave Shullick Jr., Dave McKnight and Ben Seitz.

Yellow fell on lap 21 for Talon Stephens, brother of Trent, who was pushed to the pits. Timmy Jedrzejek and Dave Duggan ran pitside for some adjustments. On the restart, Talon Stephens, who had come back onto the track, stopped again and this time exited the race.

Cicconi took off on the third restart attempt as Trent Stephens and Ordway stuck like glue. On lap 23, Ordway made his pass attempt on Stephens good, as he took over second. The trio again began to distance themselves from Lilje, Bowes, Lichty, Shullick and Shirey.

By lap 30, the race at the front was now between veteran Cicconi and 28-year old Ordway. Stephens and Lilje had their own two-car battle going as the leaders began to approach the tail of the field.

Yellow flew on lap 39 for recent Delaware winner and point leader Shullick Jr. as he slowed off turn 4. His night was ended with a locked up oil pump.

The restart of this caution saw mayhem break out with several cars, including the 97 of Jedrzejek, the 7 of Shultz, the 77 of Lesiecki going off the track or close to it in turn three. Tim Ice’s 65 was into the fourth turn wall. A red flag was called and refueling took place while the cars were taken care of.

After a lengthy period waiting for cars to be removed or straightened around, Cicconi took off again in the lead with his challengers now bunched more closely behind. But soon thereafter, the 76 and 61 separated themselves from Lilje and Stephens, Lichty, McKnight and Bowes.

At the halfway mark yellow fell for the 77 Lesiecki with Shirey, Henes, Paller and Sammut affected. Sammut had a flat, the others were parked against the wall. Another long cleanup ensued as only one tow truck was present.

Some clean green racing came after this slowdown with Cicconi, Ordway, Lilje and Stephens the key players up front. Lichty, McKnight, Friday’s winner Mike McVetta, and Kyle Edwards were still battling for positions.

The cat and mouse game between Cicconi and Ordway, then Lilje created the excitement as the laps ticked away now without incident. Ordway tried and tried to get to the outside of Cicconi, but just couldn’t make it until, as the trio came up on some slower cars, Cicconi’s 76 chance at a first win in his new ride, ended as he came off turn four, slowed and took it to the infield. Car owner Jimmy Bodnar said later that when the torque arm broke, it caused other parts to go.

On lap 83, with Ordway now the leader, the final yellow flew for the 77 of Lesiecki off the track in turn two. Trent Stephens great run was also coming to and end as he pitted here, came back out and pitted again on lap 85 for good.

Nine laps later, Ordway Jr. had claimed his win and fulfilled his dream. His dad, Ordway Sr., who stands 4th on the All-time ISMA win list among his many accomplishments, mom Cathy, and sister Jess Ordway Stephens were the first to hit the victory lane circle with congratulations followed by Clyde and Susan Booth, the car owners.

Mark Sammut, after almost being out of the picture, was happy with a fourth. “It was a tough go. We were really coming in the middle there and then got a little tangled up there with the 49. That’s the way it goes some days. After how every minute of this weekend went for us up until the start of the 100 lapper, we’ll take a fourth anytime.”

Fellow Canadian Dave McKnight echoed some of Mark’s sentiments. “We struggled all day. Time trials were not so good. It’s been a struggle the last couple of years with the car. We made some changes over the winter and we’ve definitely improved. So time trials and the heat weren’t so good. We just took a gamble and threw everything we had at it for the feature. It paid off. The car turned out to run very strong. I don’t think we had a car to win but definitely had a top five car. I’m happy with the run. I would just like to thank Toyota Lifttow, Dave Ferran and Son, Deka, East Penn, and everybody that has been involved with this race team after the last two years. They have hung in with us and I know they are starting to recoup some rewards.”