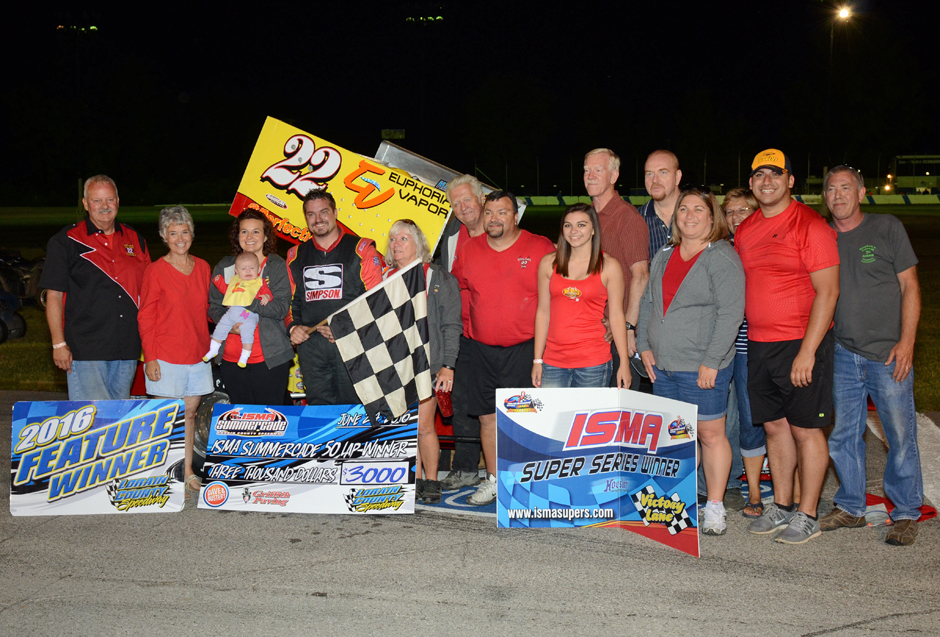 Lorain, OH – Wellington, Ohio’s Mike McVetta is becoming very familiar with the victory lane circle at Lorain County Speedway. In his last four visits there, he has won four times – three in his 22 supermodified (two ISMA and one MSA) and one in a Sauer sprint car coming just last Saturday. He certainly hopes the win streak continues. Standing by his yellow and red family-owned machine, Friday night, decked out with a $3000 winner’s check, he was quite in awe of his achievement.

“It’s just an unbelievable feeling to be out here again the fourth race I’ve been to at Lorain County in a year and the fourth win. It’s an unbelievable record we have got going and hopefully we can keep it going for tomorrow. I’ve got to thank my sponsors, Euphoria Vapor, Perfection Fabricators, Cerni Truck. Fallsway Equipment, Harrison Ford, Fourth Turn Crazies, TS Photography, Adkins Glass, and Eye Candy Graphics. The cautions were a huge blessing to us tonight. We just didn’t have the car on the top side so we were really good in fresh air. We’re definitely looking forward to another race here. Hopefully we can keep our streak alive tomorrow in the 100-lapper.”

Chasing the 22 to the finish was former ISMA champion Ben Seitz of Bourne, Mass. Seitz, who debuted a new car late last season, was happy to follow McVetta across the line in his best finish to date.

“Second was a good run. It was the first time that we were really in contention to win with this car. I was happy with that. McVetta was really strong today. This was his race to win. So, we’ll take second. We’ll learn from it and try to get better for tomorrow, and race on. The cautions tonight seemed to hurt my car more than Mike’s. I need to thank my crew, my car owner Dickie Bien, my sponsors Cape Cod Aggregates, Sam Lorruso – they pretty much makes this all happen for us so I can’t thank them enough.Hopefully we can come back and do one spot better right?”

Another Ohioan who has been knocking on the proverbial door since last year was Trent Stephens, who drove the Stout 19 to a strong third place. The team has been working hard to get the car just right, and progress definitely showed tonight.

“This run was good. We made the car a lot better from earlier today. We started in fourteenth and finished third. I’m pretty happy with that. It was really good; really racy. After Delaware we worked three weeks straight to get this car back together. So we are pretty happy with the result. It took us a little bit to get used to a lot of the new things we put onto the car. Once we figured out what was wrong with it, we got it pretty dialed in for the feature. Hopefully we have it dialed in like it was tonight and hopefully we can get a better finish tomorrow.”

The 25-car ISMA supermodified field was led to green by Dan Bowes and McVetta and it was the NASA employee who rocketed to the point to lead lap one, and ultimately, the rest of the 50-lapper.

Moving up quickly was the 17 of Seitz from a fourth starting spot with Bowes, Danny Shirey, and Timmy Jedrzejek filling up the top five.

Yellow flew on lap 9 for Lou Cicconi Jr., who was behind the wheel of the Jimmy Bodnar 76 for the first time, but it was an errant flag as Cicconi straightened himself out and restarted. ISMA point leader Dave Shullick Jr. pitted in the interim.

On the restart, Danny Shirey pulled up in turn four to stop the race again, with a small fire emanating from the 49 which he had to park for the night.

McVetta held command for the next few laps after the restart until the flag flew again on lap 12 for the Mark Sammut 78 who ended his night up against the fourth turn wall. Tim Ice and Charlie Shultz ran into the pits with only Shultz returning.

The 22 took off on the restart with Seitz behind and now Mike Ordway Jr., who had second fastest time in qualifying behind Dave Shullick Jr., had powered into third. But four laps later the yellow fell again and it was for Shullick who was sitting the wrong way in turn three. He was able to restart at the tail.

Unfortunately no laps were complete when Alison Cumens went to make an outside pass and ended up on the flatbed, done for the night.

The next restart attempt at lap sixteen stuck and McVetta once again pulled away from Seitz and the pack of Bowes, Timmy Jedrzejek, and a fast moving Trent Stephens. Rob Summers, Kyle Edwards and Mike Lichty were key players right behind.

Just past the halfway mark, McVetta was nipping at the heels of the pack, moving by Dave Duggan one lap later. Seitz, Stephens, Summers, Bowes, Edwards and Lichty continued forward motion.

With 15 to go, McVetta had put two lap cars between his 22 and Seitz’s 17. Unfortunately, a red for refueling was called as the 07 of 2015 ISMA Rookie of the Year Kevin Jaycox headed pitside and Justin Belfiore’s 98 spewed fluids in the second turn.

After the refueling and track cleanup, McVetta seemed to pull away even quicker as Seitz now tried to hold back Stephens. Summers and teammate Lichty were top five and Shullick, who has worked his way up again, was now sixth, Timmy J, Edwards, Dave McKnight and Bowes fought for top ten spots.

McVetta was on cruise out front as the laps ticked to race end. Seitz was a couple car lengths away in second trailed closely by Stephens, Summers and Lichty at the checkered.

Summers, who is dividing his race time this season between the super and a Whelen Modified, was pleased with his best finish of late. “We came here late today and didn’t have that much practice. But Brad and the team gave me a great car like they usually do and like they did last year. The car was really good but there were just too many cautions so I just didn’t have enough time to really shine. I think if there were more green flag laps we would have been a lot better. Tomorrow I have to run a modified at Riverhead, but I’d like to run the 100-lapper here. But, it’s nice to be back with these guys and run. I had a good time.”

Lichty, too was content with a top five after his chaotic day or couple weeks. Said the Canadian driver back in his hauler, “ First of all we rolled in about an hour late. We have been lacking a lot of sleep. We basically built this race car once it came back from the paint about a week and a half ago and we’ve been lacking a lot of sleep. We just missed a couple of things when we just rolled the car out of the trailer. We had power steering issues and then ended up blowing a seal in the servo and had to change the servo. In the heat race we had some more issues with the power steering. We found a pump issue and luckily ISMA gave us a couple laps before the feature to see if it was fixed. And, thank God it was fixed. I just have to thank everybody…a big thank you to my father, and everybody who came out to the shop the last week and worked every night to three or four in the morning. Also a big thank you to Craig Reed, Carol, Deanna and Raven and everyone else who puts effort into this. This car is the former 8 which we won with last year. I’m not sure what other adjustments to make come feature time but we are making progress with it. I’m looking forward to tomorrow.”