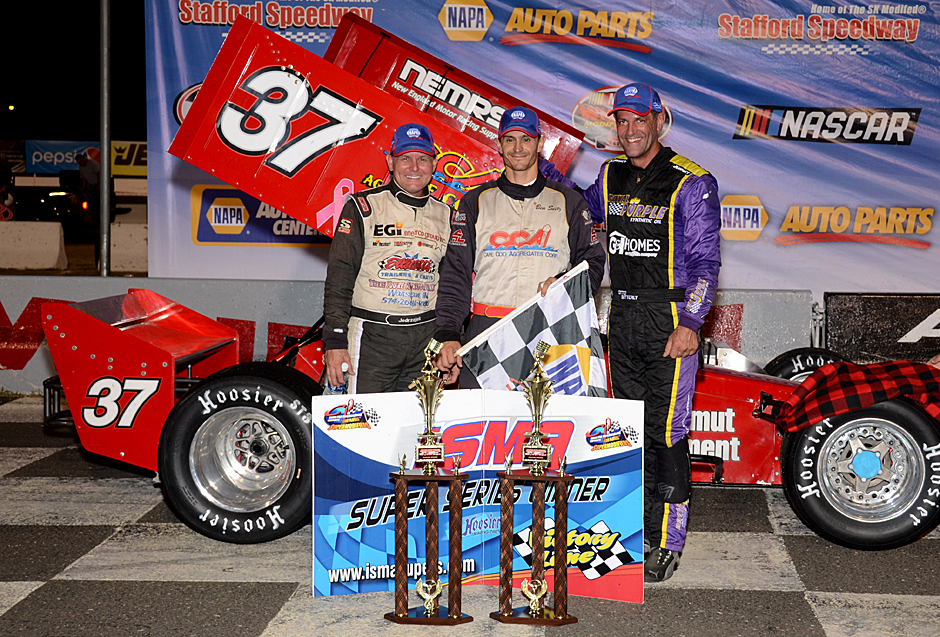 Stafford Springs, CT – At the end of the 2016 ISMA season, Bourne, Mass. driver Ben Seitz found himself without a ride for the 2017 year. Along came car owner Ken Locke who just happened to have a vacant supermodified that needed a driver and a new team was born. And, to date, Seitz has acclimatized himself quite well and the union has been quite productive. Seitz started out with a fifth place at the ISMA opener at Oswego in his first run in the car and followed that with a twelfth at Lancaster.

Friday night at Stafford Motor Speedway, Ben started outside front row in the 22-car field , took the initial lead and easily fled from the competitive field behind him, leading the entire 60 laps. A late race challenge by Timmy Jedrzejek was the only close call for the talented former 4-time NEMA champion. Only two yellows slowed the way with Seitz picking up his 7th career ISMA win, his first in the Locke 37 at a track he ran as early as age 16 when he competed with the Legends class.

Seitz described his feat with characteristic gratitude. “The car was great. We had a tough time in time trials. But we made the save in the heat race. We were a little tight in the heat, but the car was flawless all day. We got loose in traffic in the feature but other than that the car was really, really good in clean air. I need to thank Ken Locke and the whole family for putting me in the car. I think there is a lot of potential. I need also to thank Brian Allegresso and the crew. They did a lot of work to this car from Lancaster to here. I can’t thank them enough. It was really cool that my family and kids were here to see this. Thanks to Locke Crane Service, Shawmut Equipment and my old sponsor who is helping us out, Sam Lorruso and Cape Cod Aggregates. It was just a good day all around.”

Jedrzejek also had a big smile after his closing laps showed what the new Lane Racing 97 could do in only its first outing.

“It was a very good run for us. We’ll take that. We didn’t run really well the first two races. And to come back and rebound with the new car here is great. We had to make a decision to race it and jump in and commit to it today. It was pretty stable earlier. We didn’t have the best times out there but we knew we had a good race car. The heat race went well. We made a few adjustments for the feature and finished second. With that last caution, I thought I could creep up with him but we got real tight. I had to search for a different line. Toward the end lap traffic slowed him down a little bit. We dragged raced to the finish line. I have to hand it to all the guys who work on these cars. Now they have to prepare two. And, they did a great job. Thanks to Dr. Mom Says School is Cool, Essex Seafood, Enerco-Mr. Heater, EGI, Howie and Debbie Lane, and everybody that puts the effort and finances into this team. It is really a joy. Congrats to the 37. I really respect their team and Ben as a driver. It takes the sting away a little bit when you respect the guys who beat you. Of course we want to win, but tonight we roll it back in the trailer and head for Jennerstown in a few weeks.”

Oswego non-wing champ Otto Sitterly, jumped behind the wheel of the Bodnar 96 for only the second time and brought home a podium finish for the team.

“It was a good run,” said the Canajoharie, NY driver, “I hadn’t been here for years. The car was good. I have to thank Jim Bodnar, DJ Shullick and the guys for doing this deal. These guys are tough. They run with a wing every race and we only do it here and there. Going to different venues is really challenging. That 96 car goes really good. It’s the only second time I’ve driven it. Both those cars are obviously good ones. If anything, going back, knowing what we know now, we were just a little bit loose. But, the guys up front tonight were going good too. Hats off to them. Glad to see Ben and Kenny win. Overall it was a good night.”

Despite some rain threatening the day’s racing on and off throughout the afternoon and into the evening, the feature went off without a hitch as Moe Lilje in the PATCO 74 and Seitz led the way to green. Seitz grabbed off the point with Mike Ordway Jr. moving quickly up from fourth spot to second as the first lap was completed. But it was Seitz who had command as he was soon able to move away from the potent pack behind.

The first yellow fell on lap 13 when Dave McKnight, who had blown a motor the previous week at an MSA show at Toledo, with many hectic hours worked to get to Stafford at all, had the 70 fail. Jamie Timmons and Mark Sammut made quick pit stops while the 70 was towed to the infield.

The restart of lap 13 was not to be, however, as Moe Lilje’s 74 headed to the infield laying down a swatch of oil from the fourth turn to where he exited to the infield A quick and efficient Stafford crew cleaned the track and green dropped soon thereafter with Seitz resuming his role out front, and Ordway and Jedrzejek right behind.

By the lap 20 mark, the 37 had pulled away from the tough combatants behind. Rob Summers, in his first ride in the 5 supermodified, which he had purchased from Jeff Holbrook some time ago, exited the track.

As lap traffic began to play into the rapid race, Jedrzejek was able to take second from Ordway Jr., who now had Sitterly on his tail, followed by McVetta, McKennedy, Mike Lichty, Shullick, Chris Perley, Stephens, Micheal Muldoon and more, still racing hard behind.

When the race passed the halfway mark, Seitz was still the front man with Jedrzejek and Sitterly, McKennedy and Lichty intermingled with lap cars as they pursued the leader. Ordway Jr. began to drop off the pace at this juncture putting him behind Lichty.

The blazing race pace was halted on lap 44 when the 52 of Dave Danzer spun off the second turn, bringing out the yellow. He would restart and Seitz would take off again on the restart, trailed by Jedrzejek, Sitterly, McKennedy, Lichty, McVetta, Ordway Jr., Shullick, Perley and Dan Bowes in the top ten.

As the laps wore down, Sitterly and others were able to break away from the lap cars; the race was definitely still on. Lap 44 saw previous five-time Stafford winner, Chris Perley, exit the race with a broken wing.

With 15 to go, the top five was Seitz, Jedrzejek, Sitterly, McKennedy and Lichty, with Shullick, McVetta, Bowes, Ordway and Muldoon running in the top ten.

With Seitz facing some slower cars near race end, Timmy J saw a chance to mount a last minute challenge to the 37, but to no avail as Seitz crossed under the checkers just ahead of the 97. Sitterly, McKennedy and Lichty rounded out the top five.

McKennedy, who started this season in the P&L Motorsports 21 with an 11th place and followed it with a podium at Lancaster, ran a strong race for fourth. He said concisely after his run, “Good run. We started seventh and got fourth. We had some issues. The right front tire was going flat and we broke a swing cylinder on the right rear. So it was a handful toward the end. We had a good car all day and I really thought we had a chance to win. So overall it was a good night. The guys all worked really hard. Another solid top five run, it’s just the track position with these cars is really important. You have eight or ten cars that are pretty much the same speed. So starting up front is almost key. Those little bit of issues we had kind of hurt us but it still is a decent day.”

Lichty, however, was not exactly happy with a fifth place. “We ran hard to get up to fifth. It was obviously not what we had expected after winning the last two races here. Something is wrong. We’re missing something big, not in the car. When we can hit the stagger, the car is good. We’re just lost on the tires for whatever reason. Whatever we want we can’t seem to get them. I really don’t have an answer other than we need to figure it out because this ain’t working!”

Shullick Jr, Mike McVetta, who had been involved in a high-flying accident at Toledo as a result of the aforementioned McKnight blown motor, and who had a long week of repairs as well, Bowes, Muldoon and Ordway Jr., finished up the top ten.