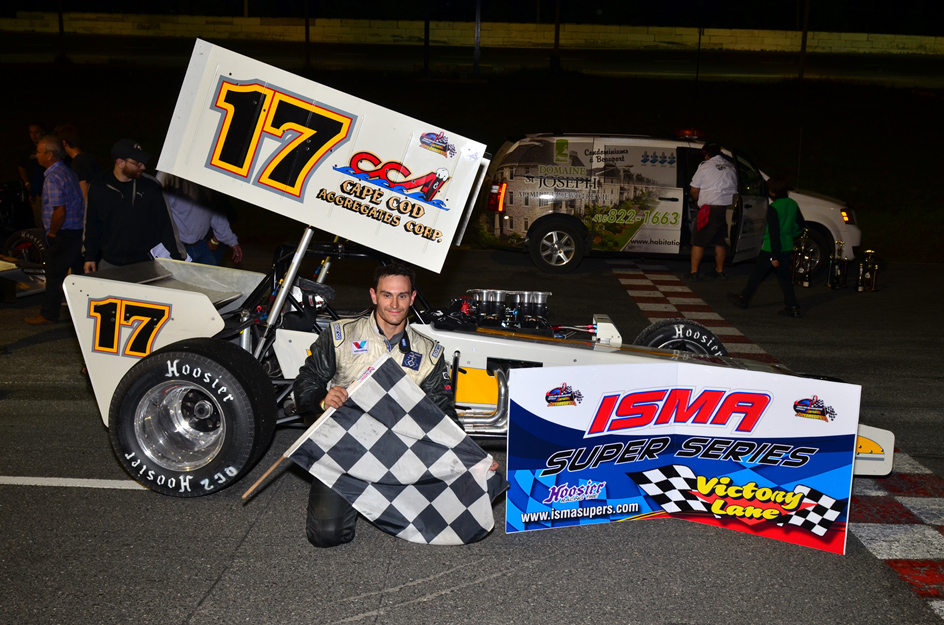 Vallee Jonction, QC – It was a day Ben Seitz, won’t soon forget. Saturday at Autodrome Chaudiere, everything just fell into place for the Bourne, Mass. driver and his crew. Ben’s 17 was consistently fast and by the end of practice he had set a new track record of 10.77, breaking Johnny Benson’s mark set in 2011. Seitz signed the track wall as had Benson, and then the 17 sat in victory lane at the end of the ISMA 75 later than night. It was about as perfect a day as any driver could ask for. And, Seitz was certainly pleased with the results. The win was Seitz’s second on the ISMA trail.

“This was very good. I am very happy. The car was really good. Brian (Allegresso) and Dickie Bien both set the car up and it was really good. I was patient and I knew the car was really good so I was there at the end. We started ninth and I kind of just picked and chose my spots. I need to thank my sponsors, Sam Lorusso and his family for sticking with us through all the adversity the last couple of years. Thanks also to ISMA and the fans who came here today. We appreciate it. I think Brian and Dickie now have this thing pointed in the right direction. Hopefully things keep going this way.”

Seitz had to work for his win with Jon McKennedy on this tail at the end of the race. McKennedy picked up his second, second place finish in the two-day Canadian stint. “This was a good weekend. We had two seconds. I just wish we could have won. We were a little bit tight at the end. Congratulations to Ben Seitz. He ran a great race. We had a good talk there with about five laps to go. But Ben was able to pull away and I ended up second. Overall it was a good weekend for us. I’m glad we came up here. It was a neat track to run. I hope we come back.”

The obvious crowd-pleaser of the race was Alison Cumens who led over thirty laps of the event before Seitz got by her as she approached some slower cars. She lost one more spot to McKennedy with less than 10 to go to earn her first podium finish in her first season of ISMA competition. The fans went wild as she spoke from victory lane.

“I’d like to thank everyone… my mom, my dad, Lou (Cicconi). I lost the tires at around lap 50 or so. I don’t know what lap I got around everybody else. I don’t know, the car was just perfect. We figured out the right setup between the first warmup and the heat race. We started to mess around with things and finally said, nope, that’s it, we’re not changing any more. I didn’t hear Ben and Jon coming so I kind of thought I was out in front there for a little bit. Then they finally caught up to me. I lost the rear tires and got loose coming off. That’s when 17 and 79 snuck under me. And, then I kind of held it there. I wanted to finish on the podium. So, there you go.”

Ryan Litt, driving the Lichty 74, took off from the pole to lead what would be another long series of green flag laps. Dan Bowes and Cumens trailed Litt as Eddie Witkum, Timmy Jedrzejek and Seitz moved in.

While Litt had command out front, and Bowes and Cumens maintained second and third, a pack of racers were fighting nose to tail behind with Eddie Witkum, Timmy J., McKennedy, Tim Ice and Lou Cicconi putting on a show. Mark Sammut and Moe Lilje were into that pack soon after the race moved past the one-third mark.

Just past lap 30, Litt was bogged down trying to get by the Duggan 51 and Cumens, much to the crowd’s delight moved her 39, a former Cicconi-Vic Miller design, into contention for the lead. On lap 36, after a little maneuvering, she was the new leader.

The first yellow flew on lap 37 when Bowes and Tim Ice tangled with Bowes ending his strong run there. Ice went to the back but left the race shortly thereafter.

Cumens was able to speed away from Litt and now Seitz, who had move into third ahead of Witkum, Jedrzejek and McKennedy.

Another long green ensued as Cumens led the way around the fast quarter-mile. Seitz moved into third by lap 45 trailed by Litt, McKennedy and Witkum. Still battling just behind were Jedrzejek and Cicconi.

Entering traffic again past the lap 50 mark, Cumens handled it flawlessly, but Seitz and McKennedy were now closing in as the two speedsters moved in.

That trio of Cumens, Seitz and McKennedy now had everyone’s attention as Cumens passed the ten to go mark still out front. She was now entering the realm of possibly being the first female feature winner in ISMA history. But, soon thereafter Seitz, also running a great race, moved by Alison as her tires faded.

Yellow fell on lap 69 when Lou Cicconi lost a water hose sending fluid everywhere and his 71 hard into the fourth turn wall. A red was called for the massive cleanup as the quick 71 was towed to the pits.

It was Seitz, Cumens, McKennedy, Litt and Witkum as the restart green flew but one lap later yellow prevailed as Mark Sammut had glanced the wall in the 78 and tried valiantly to move off the racetrack but didn’t succeed. He was done for the night.

McKennedy had made his move into second in the one previous lap and he was tacked on the back end of Seitz as the last five laps loomed. Cumens stayed within close proximity as the two battled out front. But Seitz’s hopes for a win weren’t to be denied as he crossed under the checkers a car length or two ahead of McKennedy with Cumens, Witkum and Litt the top five.

Witkum was okay with fourth but had hoped for more. “It was an okay run. It was the best. We started fourth and ended up fourth. We’ll take it. This is the fourth race with the car so we’re learning fast and gaining on it. We still have a bit of work to do to catch up with those guys. Lee Vinyl and Bobby Harrington, which is our short crew up here in Canada. Starting fourth I would have expected to do better but it’s a good start. We’re just missing a few things. Little by little.”

Canadian Litt, who is only an occasional ISMA competitor, was fine with his fifth. “This was a really good run for us. I haven’t been in a super in a long time and I haven’t been in a racecar since March so it took me a little while to shake the rust off. All in all it was a pretty good time. I have to thank Brad and Mike and everyone at Lichty Motorsports for giving me this opportunity. Hopefully we can run a few more times this year. We have Dave Lair’s car in our shop and we hope to hit Delaware and Sunset and maybe a couple of other ones.”

ISMA has a quick turnaround as they travel to Stafford Motor Speedway for Super Saturday, June 29.