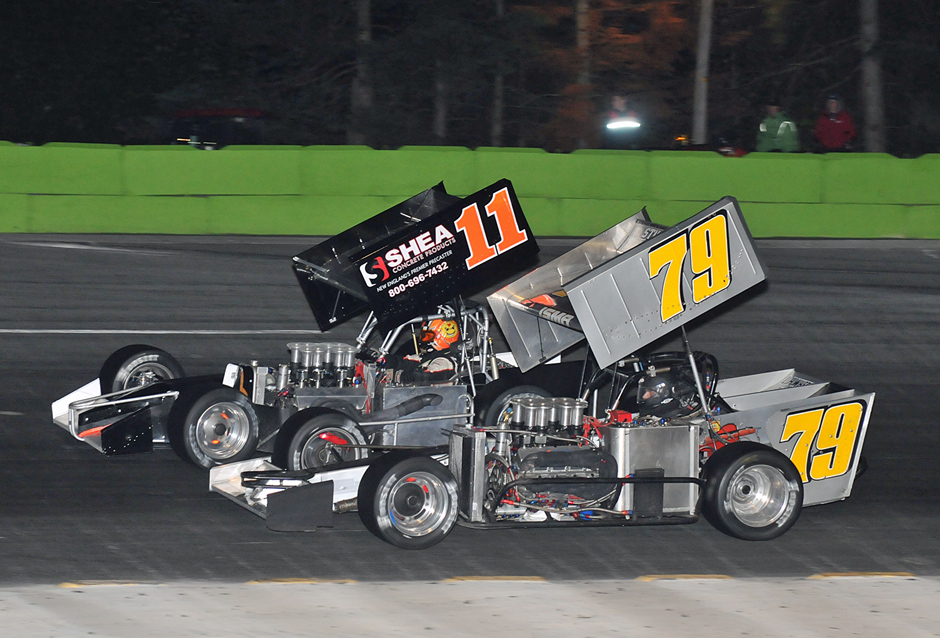 VALLE-JONCTION, QUEBEC — One night after tackling the flat 3/8-mile of Oxford Plains Speedway (ME), the International Supermodified Association traveled north of the border to the high-banks of Autodrome Chaudière on Saturday night for the Le Habitants Dany Legace 75.

At the end of the night, it was Chelmsford, Massachusetts driver Jon McKennedy standing tall in victory lane.

For those simply looking at the results of Saturday’s race, they may think the win came easy for McKennedy. That couldn’t be further from the truth.

After being the fastest car in both ISMA practice sessions, McKennedy had a flat right front tire during the final practice session that sent him hard into the outside wall. The damage caused significant damage to the right front suspension pieces on his No. 97 machine and forced the crew to put in a significant amount of work prior to qualifying heats.

“It was a very long day,” said McKennedy. “We unloaded very fast. We won both practice session and the last practice session I blew a right front tire coming off of turn two. It came right off the wheel and stuck it straight into the fence. Basically, we built the whole right side of the car in a couple of hours before the heat race. My crew work really hard to get it done, as well as some of my competitors that helped out. It was a great night.”

Following the practice wreck, McKennedy was visibly frustrated in the pit area but knew that he still had a shot to win if he and his crew could put the car back together in time. With the help of a number of people in the pit area, the car got put back together as if it was brand new.

“The car was really good. I was just hoping that we could get it back together because I knew we had a good chance to win. Everything worked out, we had a fairly decent starting spots, and a win is a win.”

McKennedy took the lead from early leader Jeff Locke on lap 20 and never looked back as he built over a straightaway lead over the rest of the field. A late race caution with three laps to go would bunch the field back up, but McKennedy powered away from the field when the green flag waved and went on to win his first ISMA feature of 2014.

Rob Summers charged from the seventh starting spot to finish in the runner-up position.

In addition to the awards handed out to the drivers, a lucky fan in the grandstands on Saturday night was able to take home a free bicycle in the ISMA Free Bike Giveaway presented by Reed Salvage.

The “Winged Warriors” of the International Supermodified Association will return to action on Saturday, July 12 at “The Steel Palace”, Oswego Speedway, for a 50-lap feature event.