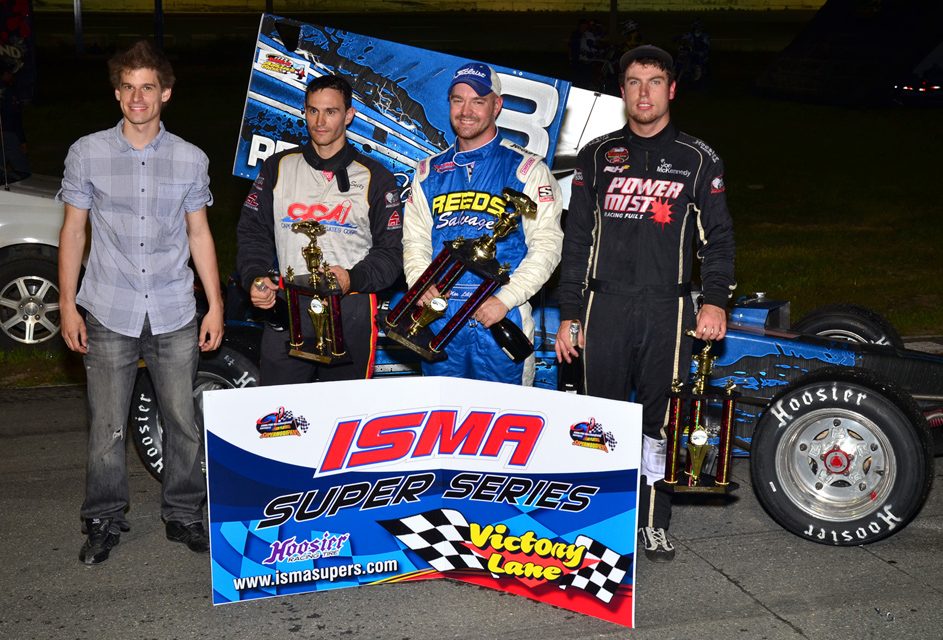 Vallee Jonction, QC – Vickery, Ohio’s Moe Lilje made his first ever visit to Autodrome Chaudiere’s high-banked quarter mile worth the trip Friday. Moe, starting 6th on the field, took his Reed’s Salvage-owned number 8 past some tough competition into the lead just past halfway in the 75-lapper. Lilje was able to stave off the advances of some very quick cars to take his first-ever ISMA win. The exciting race ran just under 18 minutes allowing for just one quick caution along the way.

Lilje was ecstatic with his victory. “My first ISMA win. It’s been long overdue. We’ve had some decent opportunities and things just didn’t fall our way until tonight. I’m happy that we made the long voyage worth it. I started in the third row and got a couple cars there in the beginning. When I got to third I kind of rode there for 15 or 20 laps. When the 17 seemed to have picked up a little push I figured it was time for me to get going. Once we got out front it was smooth sailing until maybe the last 25 laps. Then we picked up a push and we really couldn’t maneuver like we could earlier. I knew the 79 was coming but we held on.

“A big thank you to Craig Reed and everybody at Reed’s Salvage. This is a big win for them. He couldn’t be here tonight because we had some truck issues. And, thanks to all our sponsors, Kelling Services, TG Eschtruth, Stewart’s Appliances and Simpson Race Products. Thanks to everyone.”

Second place finisher, and one of the fastest cars clocked all day in practice, Jon McKennedy raced past Ben Seitz late in the event to garner the runner up spot. He too was experiencing his first run at Chaudiere. He said after the race, “It was a good run for our first time here. We started ninth and there was only one quick caution early. We were able to get up to second. We were a little bit too tight and the stagger closed up a little bit. But, now we know what to do for tomorrow. And, I think we have a real good shot to win. Congratulations to Moe. He ran a great race.”

Ben Seitz, who also had been clocking some torrid times during the afternoon, was pleased with third. “Third was a good run for us. I need to thank the sponsors, my car owner, and Brian Allegresso. He’s given us a lot of help. The car was real good. It started off awesome. It got a little tight towards the end and we lost a spot or two. But, it was good. We ran solid all day. We’ll take a third place and go on to tomorrow”.

Sixteen ISMA cars took the green in the night’s finale at Chaudiere and eighteen minutes later they had wowed the crowd on hand with a classic display of what winged supers do so well, go fast, furious and all that with finesse. The field was led to the green by Timmy Jedrzejek and Dan Lane. It was Lane who grabbed the initial lead chased by Timmy J, Ryan Litt, Ben Seitz, Dan Bowes, Lilje and McKennedy.

The one and only yellow fell on lap sixteen when the Lichty 74, driven by Litt, spun off turn two. He was able to restart, but a victim of this event was Ray Graham Jr. who had a fuel problem in the 61 and exited the race here.

Ben Seitz used the restart to grab third from Jedrzejek as Lane ran out front. In the shuffle, Lilje also passed the 32 with McKennedy soon to follow. The chase was on.

Moving up through the field at break-neck speed was Lou Cicconi who had started fifteen after some problems in his heat. Cicconi was picking his way up through the fast field and was on Jedrzejek’s tail by the lap 25 mark.

Racing continued throughout the race as the laps flew by. Lane was able to hold off Seitz and Lilje until just past the lap 37 mark. Coming into the tail of the field, Lilje used the opportunity to grab the lead from Lane and Moe came across the leader on lap 38. He quickly tried to put some real estate on the hungry pack behind with only Tim Ice exiting the racing wars on lap 43 due to mechanicals leaving a healthy number of cars still racing.

With 25 to go, Lilje tried to hold to a precarious, but comfortable lead, as Seitz, McKennedy, Lane, Jedrzejek, Cicconi and Eddie Witkum were still very much in the hunt.

With less than ten to go, MeKennedy was able to power by Seitz as Lane held fourth. Timmy J and Cicconi were waging their own war right behind as Mike Lichty, having a terrible day to say the least, finally gave in to brake problems and left the race on lap 63.

Lilje could not breath easy until the checkered as a couple slower cars brought the second through sixth cars closer to the back end of the 8, but this one was Moe’s to lose and having been in the position before, he was not about to give up the win this time. Crossing under the flags behind the 8 were McKennedy, Seitz, Cicconi, who grabbed fourth from Lane at the end, and Timmy Jedrzejek.

Cicconi indicated that he was okay with the fourth considering the situation in his car. “The brakes started going bad. I had to pace myself to get brakes before I could make a move. By the time the brakes came back it was the end of the race. I thought we did well. We started 15th and got a fourth.”

Lane, too, after a horrendous crash at Oswego on June 8, was very pleased with fifth. “It was good to finish a race. We needed that after the first couple. I got out there and got to lead some laps. The car was a little bit too tight. We’ll try and free it up for the race tomorrow night. I’d like to thank all the guys on my crew. They worked really hard this past week after the crash at Oswego. Secondly, I’d like to say hi to a couple people back home who are dealing with some illnesses – my cousin Chris and Tony “The Tuner”. I’d like to give a shout out to them. I would have liked to get them a win. Maybe tomorrow night!

Popular late model hotshoe, Patrick LaPerle of St. Denis Quebec, who was experiencing the supermodifieds for the first time driving the Lichty 48, finished tenth in his first-ever attempt. His smile in the pits told it all, as did his comments as he described his ride with a tad of a French accent. “It was awesome. There is so much acceleration. You just touch it and it goes. There’s plenty of car there. I loved it.”

Racing continues Saturday with another slate of qualifiers and a 75 lap feature.