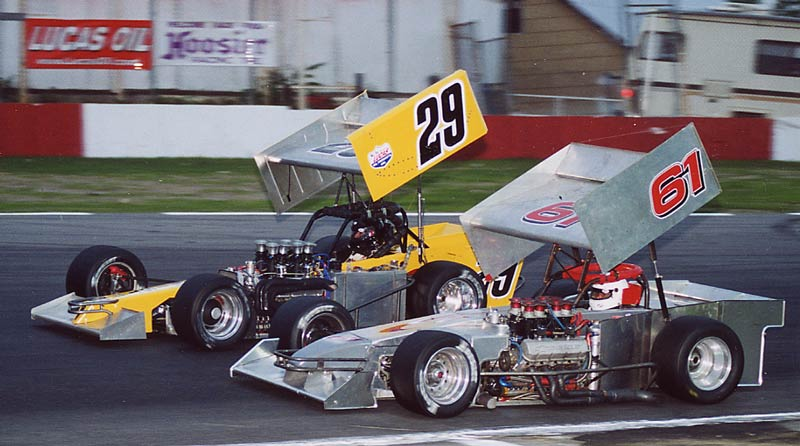 Epping, NH .- As has been the norm this racing season, rain tried to throw a damper on Saturday night’s Star Speedway ISMA-Lucas Oil Super Series event, but this night racing won. Russ Wood, adapted his game plan to allow for threatening skies and was able to easily come home with his third ISMA feature event in as many shows. Starting twelfth in the field of 23, Wood had to hunt down

leader Mike Ordway, who due to misfortune at Sandusky, was starting on the pole. And, Russ had to move quickly. Rain was all around.

Wood took 30 laps to close up the huge lead Ordway had established. Thanks partly to traffic, Russ

put the 29 by the 61 on lap 34. Ordway fought back but to no avail. The Pelham, NH driver was soon cruising to victory number three. “The car felt really good all day,” said Wood after the win. “We started 12th and I knew Mike was up front and I’d have to pass a few other guys With the rain coming I figured I’d just go for it. It was 75 laps and I just picked spots – high and low. The car was just working fabulous. There was a lot of traffic, but that okay, it went my way. Everything went the way we wanted it to. I was worried about Mike out front, but then I got him in sight. I thought he might be holding back a little When I got next to him, he came back by me. He pushed me a little but I figured I’d better go because of the weather. The car was just awesome and I went.”

By race end, Wood’s teammate Pat Abold had a half dozen cars between his 26 and the screaming yellow 29. Still, Abold was content with a one-two finish for Dunigan Motorsports. Said the parttime competitor,”It felt really good to finish second. The car got a little loose about half way through the race, but all in all, it was my second time in the car and my second top three. I’m psyched. Now, we’ll work on it. It’s in once piece, so now they can get it a little closer and we’ll be able to win some races. We had a few scares. I’ve had a lot of those. You know you always have to be ready for that stuff. Today was my day. I got through both of them unscathed so I’m really happy.”

Probably the happiest of the top three finishers was John Payne, driving the Bruce Budnick car to his best finish since he has been in the ride. Said Payne smiling, “It was quite exciting. I think I got bottled up there in lap traffic. I think I might have caught Pat but at 65 laps down, I figured I’d just not

try and push it – to just play it cool. That’s all I did. It’s our best run so far. We were fast at Toledo but unfortunately lost a motor. Bruce had to thrash around and get the car done. Then I ended up sleeping late this morning and my brother had to warm the car up. Maybe I should sleep late a little bit more often. It was fun. I’m happy for everybody on the team.”

The 75 lap ISMA main started one car shy as Brad Licthy’s 84 did not make the call. When the green dropped Mike Ordway, whose career began at the Star bullring, looked right at home out front. Only a quick yellow on lap 2 slowed him a bit.Ordway was well into traffic by lap 15 with Jamie Letcher, John Payne, Abold and Wood trying to keep him in sight.Methodically, Abold and Wood got by Letcher and Payne to close the gap, but Ordway still held a commanding lead and a couple lap car cushion at the 25 lap mark.

As Wood stated, he knew weather might be a decider, so he wasted no time putting the 29 behind the 61. He was by on lap 34 at the line, but back came Ordway to lead lap 35. They swapped spots during the next circuit with Wood reclaiming the point. A yellow flew on lap 43 as the 99 of Joe Petro spun almost collecting several of the lead trio.

Wood was gone on the green as second place runner Ordway began to show signs of smoke and sparks. A scavenger oil line came off and at the same time the left front king pin loosened causing the tire to “kick in.” That was it for Ordway who had to park the once dominant 61 near the lap 50 mark.

It was clear sailing now for Wood as Abold chased, but with always a few lap cars to slow him down. Payne ran third while Scott Martel, Jamie Letcher and Chris Perley vied for top 5 spots behind.

A lap 64 yellow for a spin by Jennifer Chesbro slowed Wood’s trip but not for long. Lou Cicconi exited the race on this caution. Back in action, at least five cars still separated first and second while three more held back Payne, Martel and now Perley, who had gotten by Letcher, for fifth.

At the checkered, Wood was alone out front while Abold crossed in second. Payne was third, while the Rowley Rocket raced up into fourth. Martel finished the top five.

Perley, who had started 15th, said quizzically afterwards, “Let’s see here. Is losing a cylinder at Star Speedway good or bad? That is the question. I don’t know. We keep missing a little bit, but we’re still plugging away and up with a good finish. We have had terrible starts. I think we can time trial real good but we can’t qualify good. Does that make sense? So we’re going to go home and work on that. We’re going to watch all our old racing tapes and we’re going to come back tired!”

Martel, who is running a less than full schedule this season was pleased with fifth. “The track was tough. I started 10th and got up to 5th. I fought traffic the whole race. I was happy to get the race off first of all. I appreciate all the hard work by ISMA and Star Speedway to get this in. And, then to come out of it with 5th and not get banged up…I’m happy with that. So we’ll just go on to the next one”

Cayuga Speedway in Canada is next up for ISMA on July 12.