“LIQUID” LOU STEALS THE SHOW IN ISMA’S RETURN TO OXFORD 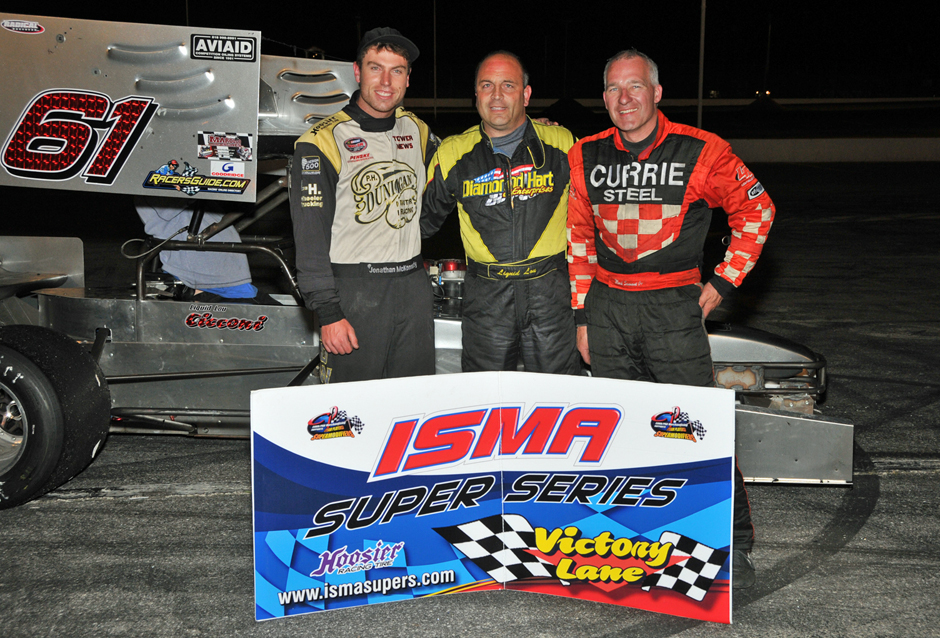 OXFORD, MAINE — For the first time since August 18, 2007, the “Winged Warriors” of the International Supermodified Association (ISMA) returned to Oxford Plains Speedway (ME) on Friday night for the Bentley Warren Classic. 17 Supermodifieds took the green flag for the main event on the 3/8-mile oval, but at the end of the night it was defending ISMA champion Lou Cicconi who stole the show.

Cicconi used an incredible three-wide move to take the lead for the final time on lap 65 and went on to claim his first career ISMA victory at Oxford.

“It’s awesome,” Cicconi said of his win in ISMA’s return to Oxford. “I’ve raced here four times and this is my fifth now I believe. I almost had it won once, but I had a flat right front tire when I was leading. I enjoy technical tracks and this is one of them.”

Starting from the pole position for the 75-lap feature, Cicconi seemed to have the car to beat early on in the event before Mark Sammut began to close the gap during the middle stages of the race. As the two leaders began to encounter lapped traffic, Sammut would power to the inside of Cicconi in turn two on lap 43 to take the lead.

“Liquid” Lou would find the opportunity he needed to re-take the top spot on lap 65 when he used a slower car as a pick to trap Sammut on the inside. Coming off of turn two, Cicconi powered to the outside of both Sammut and the lapped car as the three cars went three-wide down the backstretch.

Cicconi would clear both Sammut and the lapped car as he powered off of turn four as the new leader. From that point on, Cicconi never looked back on his way to crossing under the double-checkered flags as the winner of the Bentley Warren Classic.

After seeing how things went down on the race track, Sammut had second thoughts about how he should have handled the slower car but quickly gave credit to Cicconi for pouncing on the opportunity to re-take the race lead.

“We were loose right from the start and we kept getting looser as the race went on,” said Sammut, who ended up finishing in the runner-up position. “When we got into lapped traffic, I kind of needed the bottom. Using what I know now, I should have probably given it a shot on the outside to see what happened. He kind of pinched me behind one of the lapped cars and he got around the outside of me. I give him credit. He saw the opening and he went for it.”

The win for Cicconi is the first for the defending ISMA champion with his new Clyde Booth-owned No. 61 team. With a brand new car under him, he’s hoping Friday night’s win will get his team on the right track to defend his 2013 ISMA driver’s championship.

“This is huge, especially with this car being brand new,” said Cicconi. “This is the first time this car has finished in a feature. Basically if the car finishes and it handles well than I think we have a good shot to win another championship as long as we’re consistent.

Unofficially, Cicconi also now holds the Oxford Plains Speedway track record after being the first driver to ever break a 13-second lap at the 3/8-mile oval. The eventual race winner turned in a fast lap of 12.999 seconds in the second ISMA qualifying heat race.

Third-place finisher Jon McKennedy, who started in the 11th position, was the winner of the $100 Baker Steel Detailing Hard Charger Award on Friday night.

Rob Summers (4th) and Ben Seitz (7th) will also receive $100 each for their charges to the front on Friday night. Those awards are presented to the drivers in honor and memory of SFC Charles T. Briggs (USMC), Lieutenant Commander Karl Weigand, and Sue Ann Gardner.

In addition to these great awards available for drivers, a lucky fan in the grandstands on Friday night was able to take home a free bicycle in the ISMA Free Bike Giveaway presented by Locke Crane Services.