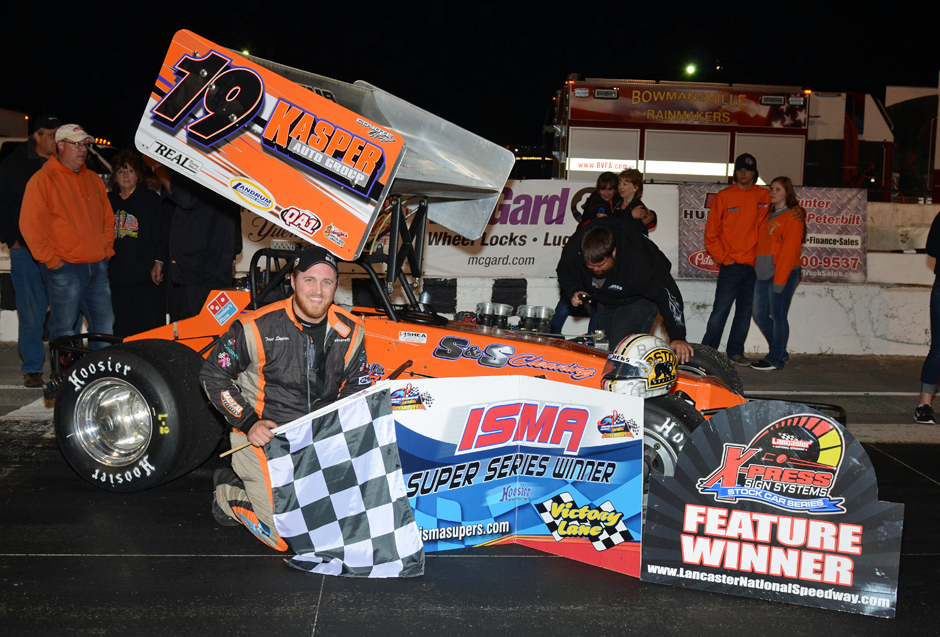 Depew, NY – Saturday night, the large crowd of race fans waiting to see the ISMA supers return to the Lancaster Speedway for the first time since 2003, were not disappointed. With the winged supers turning high 14 second laps in practice, the expectation of an exciting and fast feature was fulfilled. Only a few yellows slowed the race action with Ravenna, Ohio’s Trent Stephens coming up with the win after wresting the lead from Moe Lilje in the Lichty 74 on lap 12. It was Trent’s third ISMA win in only his second full season with the group . He was not without challenges however, from some of winged supermodified’s best who were in the field, vying for points in the lucrative Triple Crown Series introduced this year as well.

Trent, who had run an MSA race at Lancaster back in 2009 when he was just starting his career, didn’t lean too much on that past experience. “I don’t remember much about that race. It was only my second time in a super.”

He described this night in victory lane. “At the beginning of the night my car wasn’t very good. Luckily we got the car a lot better but man it was rough. Just all the bumps and the transition on the straight away, it was jerking the wheel all the time. I’m a little tired, but I won and that’s all it matters.

“The car is completely different – the track is completely different. They repaved the turns and we could really haul through the turns. The last time it was hold onto the turns. This time we got to race and I’m really happy with the car. Unfortunately everyone seemed to want to run the same groove so when you caught the traffic, it was a little bit tough running the good groove. I tried to stick it on the outside and sometimes I got the good groove and sometimes I didn’t. I never really saw Dave until that one caution and I saw someone was close. I didn’t know who so on the restart I went like hell. It’s awesome being back here. There’s a great crowd. Thanks for everyone coming out. I appreciate it. I hit the wall at Oswego and we had to thrash on the car and it wasn’t quite done until last night. I have to thank all these guys, my sponsors Kasper Auto Group, Domino’s Pizza, S&S Cleaning, Landrum Spring, Schaeffer’s Racing Oil. And Real Wheels. A lot of stuff goes into these cars and when you get up close, you see it.”

Veteran Dave McKnight once again, in this early race season, had to battle adversity just to get into the field and then worked his way into second after a lap 23 restart.

“The car was really good. The guys did a great job. We lost a rear end earlier and Gary and the guys pulled together and got it changed. We definitely had something for Trent. Congratulations to him and the Stout team. We got into a little jingle on that restart with Mike McVetta and bent the nose wing. It made the car really pushy after that. That made it really difficult to drive. But, hey, we’ll get them next time. We are running the Triple Crown series changing the car back and forth. It’s really difficult you know and I want to thank all these great fans for coming out tonight. I hope you enjoyed the show and hope we can come back next year.”

Jon McKennedy, who was coming off a Modified Racing Series win at Stafford Motor Speedway in Connecticut, the night before drove the Vinal supermodified into third. It was only the Chelmsford, Mass.’s driver second time in this car.

“This was a good solid run and a top three. We had a really good car. I felt like if this race was 75 laps I would have been sitting really good. We were a little bit too tight at the beginning, but as the race wore on it got really good. It was a big improvement from last week at Oswego. This is a new team and a new car to me, so getting a podium finish in only my second race with it is a good deal. Thanks to Pam and Lee Vinal for the opportunity, the crew and to all the fans who came out. Hope you enjoyed the race. I’ve always loved the supers. They are pretty much the ultimate short track car. When Pam and Lee approached me last year to do some races for this year, I was onboard. It’s a busy schedule for sure. I will be running ISMA full time and probably 20 modified races. I’m looking forward to it.”

Moe Lilje and Dan Bowes led the 24-car field to green and Bowes had grabbed the initial lead but only held it one lap before yellow flew, literally, when the that flag blew off the flag stand onto the track. On this restart, Lilje got the jump as Bowes bobbled a little allowing Lilje to take the point.

A spin by Bob Magner brought a slowdown on lap 3 as everyone was feeling out the track. The 40 restarted at the rear and the race resumed with Lilje out front and Trent Stephens moving past Bowes to take second and the race was not to slow again until lap 23. Lilje and Stephens began to pull away with McKennedy pulling by Bowes for third. Bowes was pressured from behind by the likes of Timmy Jedrzejek, McKnight, Mike McVetta, Ben Seitz, Mark Sammut, Dave Shullick Jr, Mike Lichty and Chris Perley.

Lilje and Stephens fought for the lead out front with Stephens getting alongside several times and finally charging by the 74 on lap 12. Behind the dueling duo were McKennedy, Bowes, McKnight, Jedrzejek, McVetta and Seitz close behind. Seitz would lose the handle slightly on lap 18, sliding off the track, but coming back on with no flag needed.

A flag did fall, however, on lap 23 when the 84 of Mike Lichty had backed into the foam in between one and two sending him out of the action. Rich Reid and Michael Muldoon were also out of the action at this juncture.

Trent Stephens, Lilje, McKnight, McKennedy, Bowes, Jedrzejek, McVetta, Sammut, Shullick and Perley lined up in the top ten behind the 19 on this restart and the race never stopped again until the checkered fell.

McKnight took advantage of the restart to get by Lilje one lap later as the 74 looked to have encountered a problem that saw the car drop dramatically backwards.

Stephens never really had to worry as the boys behind chased each other. McKennedy was giving McKnight a strong fight for second as McVetta took the fourth spot from Jedrzejek who then lost fifth to Bowes. And that’s the way they crossed under the checked soon thereafter, with fifteen cars on the lead lap at the end.

McVetta, who had just missed a fifth place at Oswego, was all smiles after his fourth at Lancaster in his first ever trip there. The NASA mechanical engineer who drives his own home-built chassis, said afterwards, “I’ll tell you what. For the first time being here, it’s certainly a different place but the car came on toward the end. I kind of messed up with some of the fuel stuff on one of the restarts and lost a couple spots, but man, those last couple laps – I wish we had five more – because this thing was just charging, charging, charging. I just can’t thank all the guys who help me enough. It wouldn’t be possible without them. The car was good. They really gave me a good piece that lasted the entire race. I can’t say good enough about them. To be two races into the season and to finish all 100 laps of those two, with a sixth and a fourth, is a huge stride for the team over what we’ve been in the past. We were really good both days. So, this is pretty awesome. Thanks to Dad, Doug, Deano, Randy Burch came out, Euphoria Vapor, Perfection Fabricators, Fallsway Equipment, Cerni Truck, Banks Manufacturing, 4th Turn Crazies, everyone, and of course my mom, and my beautiful wife and daughter!

Dan Bowes, finishing fifth in his relatively new car, debuted toward the end of 2016, was a little down after the race. “The car was really good. I’m pretty bummed out. We got a great start and then the flag fell on the track and we got a caution. On the second restart, I didn’t think we were going green and then I heard we were going to the green and I guess I was asleep on that one. I really think I gave the lead away there After that the car was pretty good. I think on the longer runs we were gaining on the guys in front of me but it was just so tough to pass, I didn’t have enough speed to get around anybody. I’d get right up to someone and then just couldn’t finish the pass. I think we may have given one away tonight, but that’s all on me. I’m still happy where we ended up. The car was really really good and I think if I was in clean air, it would have been even better. All in all I’m happy. The car is in one piece and we have a good bunch of notes for the next time around.”

ISMA next travels to Stafford Motor Speedway on Friday, June 23.