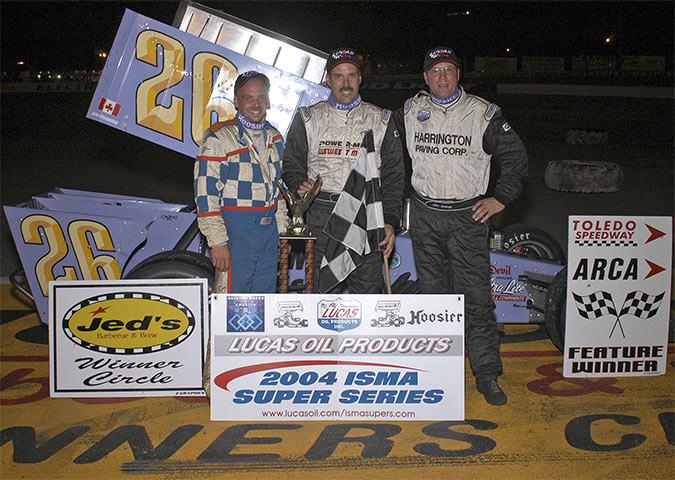 Toledo, OH – Pennellville, NY’s Pat Abold stopped a successful supermodified career in the late 90’s to concentrate on his son’s quarter midget racing and some Silver Crown events. Pat was approached to drive again part-time in 2003 in the Dunigan 26. He picked up where he left off producing some very competitive top five finishes in the car. In 2004 Abold was ready to get back into it fulltime and equally ready for that first win with his new team. Friday night at Toledo Speedway, he found victory lane after a torrid duel with Dave McKnight for the top spot. Unfortunately for McKnight, the power plant blew on his Lucas Oil 94 just eight laps shy of a possible victory for the Patco Team. Abold had clear sailing after that and went on to win his 14th career ISMA checkered, putting him a tie for sixth place on the All-Time ISMA win list with, ironically, McKnight.

Said Abold after his first winged supermodified win since 1996. “I thought we were going to get one sooner than this, but you know what, we had some great runs last year. We had a little bit of bad luck this year. But, the bad luck has forced us to turn around; to make some changes on the car that were necessary. I’m just psyched. It feels so good to win a race again. It’s been a while and it lets me know that I’m still competitive. It was a great battle there with Dave. He was leaking something the whole race, which was covering my shield and everything. When he blew the motor I said here we go and I thought I was going to spin in his oil. But, I never slipped a wheel. It was a W for Dunigan Racing and Pat Abold tonight. I’m really happy about it.”

Mike Ordway, who came on like gangbusters after pitting to change a flat tire, was a distant second to Abold when the final flag flew. “I got a flat there past midway while I was about sixth so I had to go in a change a tire. We put a good one on evidentially. It got me back up to second. I had been waiting it out a little bit before that happened. This place is tough on tires. It turned out to be a good run.”

Johnny Payne, coming off his career first in ISMA just a few weeks ago at Oswego, was ecstatic with his third place finish. “Coming back from Oswego, we got here today and we were fast. We bolted four new tires on the car and we dropped a second for time trials. So, we talked about the fact that it was back to the same thing we had been fighting before Oswego. We just went back to square one. We started in sixteenth tonight and we came all the way up to finish third. That’s makes us real happy. We’ll get it all ready now and go on to tomorrow and hopefully do the same thing, except maybe I’ll be first again.”

A great crowd watched as a great field of ISMA competitors took the green flag at Toledo with Ohioan Jack Smith taking the initial green. A couple other “locals” in Moe Lilje and Dave Shullick Jr. chased Smith for several laps before Canadian Dave McKnight melded into the mix. McKnight, a bit hungry for a win himself, pulled by Smith off turn four on lap 7. The first yellow of the race fell the next lap for AJ Davis.

Yellow flew again on lap 12 when Rick Wentworth and Bobby Santos III tangled out of turn three. Both were hooked.

McKnight took off like a shot but Abold and Perley were soon there in hot pursuit. A classic battle of the veterans was forming as Lilje, Randy Ritskes, Shullick, Ordway and Lou Cicconi chased the lead trio.

On lap 22, an unfortunate accident was set up when Chris Perley’s 11 slowed suddenly off turn two. Coming hard from behind was Nokie Fornoro who rode up over Perley’s wheel, flipping and riding the wall before coming to rest. Perley described what happened.   “We broke a mandrill bolt which kicked off all the belts and the car died. I tried to stay straight and keep out of everybody’s way, but it just didn’t work out.” Both Perley and Fornoro’s cars were towed or flat-bedded off the track with the 32 receiving the brunt of the damage.

After the restart, McKnight and Abold were now the combatants up front. Randy Ritskes, Shullick, Jr., Cicconi, Jedrzejek and Payne were the next five. The lead pair was just beginning to pull away for five or six laps before another red fell. A tangle between Jack Smith and Lilje caused a fuel leak on the 79 and for added safety the cars were stopped on the track. A heat incident had already seen Sean Sauer incurring burns after leaking methanol had soaked his firesuit and ignited as he was trying to get off the track. He was taken to the hospital for treatment.

With a little more than 20 to go, the action heated up intensely out front between McKnight and Abold, both looking for the win. McKnight shut the door on Abold on each attempt until the infamous smoke cloud spewed from the 94 on lap 42, bringing out the last caution of the night.

The race was Abold’s to lose in those last 8 laps but he had no intention of doing that. He left second place runner John Payne to fend off the advances of Timmy Jedrzejek, Mike Ordway, Lou Cicconi and Mike Lichty who were still gunning for a top spot. Ordway moved by Timmy J to claim third with just five to go and then past Payne for second.

Timmy Jedrzejek, who was a part of that spirited battle for the number two spot, said later. “It was a long race… the 24 hours of Toledo. We had a good car, but we burned a tire up in the heat, so the crew made some great changes. When we started the feature we knew we had to be gentle on her for a while. I think I lost three or four spots there at the start and went backwards a little bit. We were just trying to cruise it and play it smart for a while. By the time we started to come on, cars started to fall out luckily for us with some crashes and motors. We had a good car at the end, probably much better than at the start. We were running third and I thought ‘man we have another podium finish and along came Ordway and blew by. We’ll take a fourth and go on to tomorrow.”

Rookie driver Mike Lichty commented on his fifth place finish. “All day we were fighting with the car. Thanks to Coniam and McKnight helping me out, it got me straightened out. When the feature time came, I switched my groove up a bit and away we went. I had a scare with Cicconi there and I thought I was going in the wall, but all in all it was a good night.”