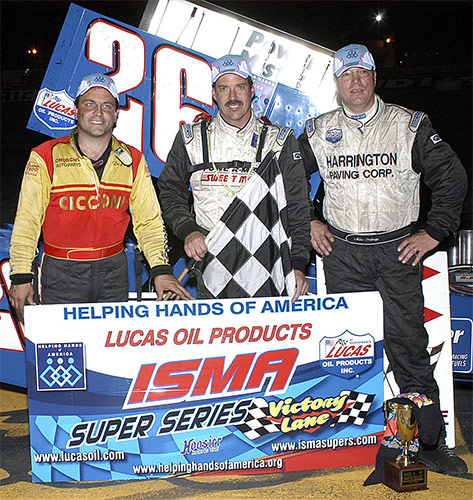 Toledo, OH – Pat Abold won his first feature in a while last year when he claimed the ISMA Lucas Oil-Helping Hands of America event at Toledo Speedway. Friday night he proved that he was ready to win number two as he stormed away from a tough field of ISMA supermodifieds after taking the lead on lap 18. Pat inherited the lead from Scott Martel who had claimed the point from his pole spot and built himself a healthy lead before yellow fell on the eighteenth circuit. Martel’s Lane-owned 97 showed canvas on the tire and he went pitside for a change, giving up the top spot to Abold. It was all Abold after the race resumed although for several laps he had his teammate Russ Wood and then Lou Cicconi there to keep him honest.

Said Pat after his commanding win, “This was definitely a great run. This is a great track. It’s got a lot of grip and it’s really fast. I can’t say that I needed to improve anything tonight. I’m really happy. I knew last race that we had a great car. And, I think it’s just going to be a great season. Doc and the crew have done a great job. Lap traffic was a little tricky here because the track is so fast and you have to be a little bit careful. I was trying to be a little bit conservative when I came up on them. But, the car was perfect all night.”

Abold’s nearest competitor was “Liquid” Lou Cicconi who already had a feature win to his credit in 2005, also copped a heat win at Toledo and was among the fastest in time trials. Lou commented after his run, “It was a real good race – fast paced It was a shame about those couple of yellows and reds. But it was a good race and I enjoyed it. “

And, running close behind Cicconi, in third place was Mike Ordway who had crashed his 61 in his last wingless outing. . “My racecar was good tonight. I didn’t crash. I got to finish the race. The car was really good. It really came in good at the end of the race. I’m happy. We made a bunch of changes to the car and now it should run better without the wing too. We’ll try it again at Jennerstown tomorrow.”

Scott Martel was on the pole and didn’t waste any time taking over the lead in the Lane 97. Chasing him was outside poleman, Nokie Fornoro, but it didn’t take long to see that Abold was knocking off car after car on an outside rail. Pat was second by lap nine followed by Russ Wood, Cicconi, Mike Lichty and Fornoro.

A lap 18 yellow/red was for the 5 of Vern Romanoski whose 5 had to be flat bedded off the track. It was here that Martel lost the lead to a badly worn tire.

Abold took over the lead but only one lap was down before another yellow fell for a spinning Fornoro who lost a tire. Alex Hoag was collected in the incident and hooked. Matt Seavey also went pitside with a bruised tire. Martel, who has restarted at the rear, parked the 97 when more than tire damage was found.

Back underway Abold tried to shake off Wood and Cicconi as Ordway waged a battle with Mike Lichty for fourth. Chris Perley, who once again had the fast time trial among the super mods, came up to try to take fifth from Lichty.

At the halfway mark, heavy traffic faced the leader and for a brief moment out back Wood actually got under Abold. Laughed Wood later, “I had to wake Pat up.”

One nasty red slowed the field once more when on lap 33 the 9 of Kyle Carpenter broke out of the pack and slammed hard into the fourth turn wall. The 9 was pretty much demolished while Carpenter was transported to the hospital complaining of shoulder pain. The 94 of Dave McKnight also experienced tire problems and made a change during the stoppage.

Under green again, Abold picked up where he left off, leaving Cicconi in his wake. Ordway, Wood and now Perley made up the top five as Abold sped away. Perley’s 11 seemed to come alive in the waning laps as he picked off Wood for fourth spot and set his sites on Cicconi. Ordway in the meantime, grabbed second with four laps to go as the race for second through fourth proved the most exciting on the track in the latter stages.

It was Abold, Ordway, Cicconi, Perley and Wood in the top five under the checkered.

Defending ISMA champ Perley, who had a disappointing start to his season at Waterford, said, “We finished fourth. It’s way better than Waterford. Eighteen spots better than Waterford. The car was loose all night. Then, the last eight laps we were perfect. We needed a 60 lapper or maybe 65. It’s a step in the right direction. Abold is stretching and running. But, it’s a long season and we’ll see what happens. It’s on to Jennerstown.”

Abold’s teammate, Russ Wood commented on his fifth place, “Well we went from fourth to fifth. The car was good in the first half but in the second half it started pushing. I tried the high side and some guys got by me. We did okay. We weren’t the fastest car out there.”