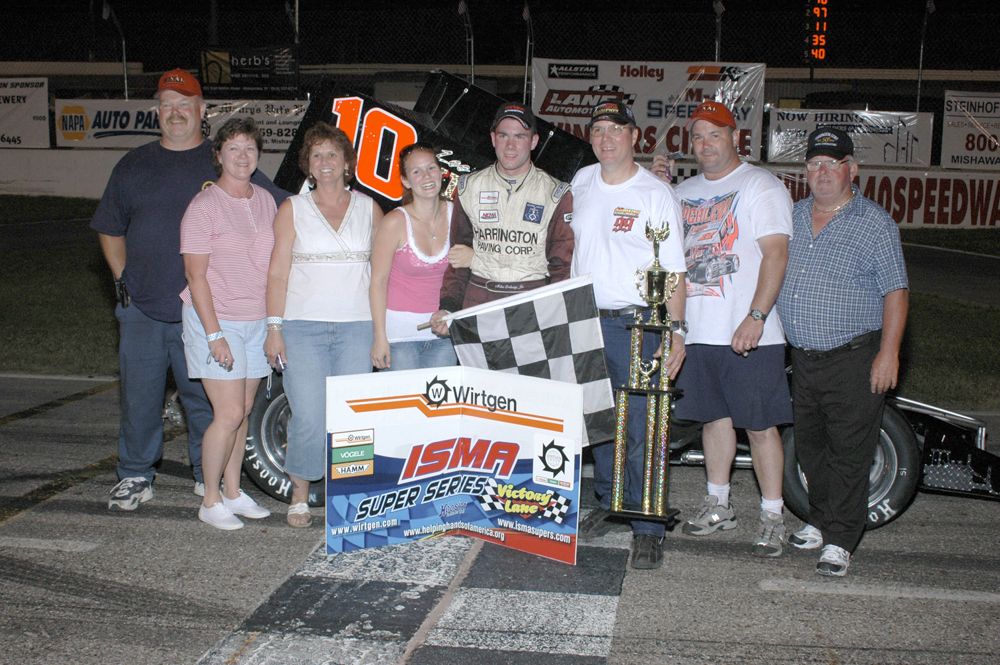 Jones, MI – Mike Ordway Jr. gave himself a nice high school graduation present on Saturday night at M-40 Speedway by winning his first-ever ISMA-Wirtgen feature. And, for the son of the fourth place All-Time ISMA feature winner, that feature came quickly. It was only his second full ISMA race. The 18-year old second generation driver, piloting the Rick Wentworth 10 showed the field around the 3/8’s mile banked Michigan oval as if he’d been there a 100 times before.

But one might not be surprised at his quick rise to the top given his dad’s expertise and the help he’s gotten from his dad, his car owner Wentworth, Vic Miller, Chris Perley and crew. He couldn’t go wrong and his days in the 350 supers at Lee and Star Speedways in New Hampshire certainly prepped him well. His proud family were all there to greet him in victory lane, some coming in on the red eye with him that morning.

The young Fremont man stood with his trophy while his friends partied back home as he described his race. ”I took the lead early, but if I could have I would have liked to follow someone else and then get by him at the end. I hate leading all the laps like that. The race never seemed like it was going to end. We kept having yellows and I didn’t want to see them but I did want to see them to get away from the lap cars. They showed me ten to go and then five to go and it seemed like an hour after that the checkered fell.

“Lap traffic was pretty good tonight. A couple of times it got a little scary out there. Most of the time the guys gave me room and I’d like to thank everyone for that. They ran me clean. All in all it was a good night. Early in the day I considered this track pretty much like Lee. It doesn’t really have any grip and it’s really hard to pass here. I said this morning that this was one of my new favorite tracks. We ran good in practice and good in time trials. I’ve got to thank Vic and the guys, Vinal Excavating and Harrington Trucking. And, especially my mom and dad, my sister and Ricky Wentworth – just everyone!

Ordway Jr. led all but the first lap of the ISMA-Wirtgen main and for most of that he was chased down by Jeff Holbrook and then Robbie Summers who swapped spots with twelve to go. Summers, driving the Lane 97 couldn’t catch the Perley-look alike car, which was patterned after the Vic Miller 11. He was content with a second. “We had a good car, just not as good as Perley’s two cars. They were good. We were tight. A second place is good and the car is in one piece after two nights. I’m happy with that.”

Chris Perley had once again set fast time but he had to struggle to get a podium finish on the tight M-40 track. Starting 11th, it took until lap 49 for him to move by Holbrook and into the top three.” I couldn’t get through. It was awfully tight. I think starting position was key. Mikey had it and had the right car tonight. It’s great to see. This is only his second ISMA race. It’s just unbelievable. He did the right thing. He got out there and ran away like a jackrabbit and held on at the end. He didn’t get rattled. He did great. We did the best we could. We just battled around and had a ball with Bobby Magner. We were both sideways seeing who was going to wreck first. Hey, I’ll take a top three!”

After time trials and heats, an attrition-diminished field lined up for the Dion Parrish Memorial 50 with Vern Romanoski and Dave Sanborn in the front row. Romanoski led the initial circuit but Ordway Jr., from his third starting spot, dove past the 5 to take a lead he would not relinquish. The compact high banked track was like home to Ordway and off he went and quickly cutting through the slower cars at the tail. Jeff Holbrook in his new Allegresso-built machine stayed right behind while Bob Magner, Rob Summers, Chris Perley and Mike Lichty trailed in traffic.

The first yellow flew on lap 21 when Mike Lichty, driving a backup 84 lost a right front hub ending his day.

The restart left the field bunched behind Ordway, but with some lap cars as cushion as the halfway mark approached. Holbrook and Magner’s teammate Dave Trytek in the 70 exited the race overheating on lap 25 to lessen the field while the 35 and 40 ran in the top five.

Ordway Jr. was on a rail – not an easy task on the track most of these drivers had never seen, especially one in only his second race. Only one other slowdown came on lap 38 when the Burdette 63 driven by Steve Shellenberger, drove off the track in front.

The seemingly long laps to Ordway ticked off rapidly for the others like two-time feature winner Perley who was having a battle with Bob Magner for fifth. Robbie Summers, looking like the fastest man behind the leader, moved up to second just after the restart and tried to close in.

Perley finally swapped the fourth spot a couple times with young Magner and headed for Holbrook who he picked off just before the checkered fell. But the black car in victory lane was not to be an 11 but a 10. Summers, Perley, Holbrook and Magner followed Ordway.

Holbrook, who was just getting used to his new ride, was pleased with what the car accomplished in the two days he ran it.” It would have been nice to get a podium finish. I was expecting the 11 to come many laps before he did. The car is only going to get better. They left it tight for me because they didn’t want me to be loose. For the second day out in this car and my first top five with the wing on, that’s awesome. And, two of us in the top five!”

Magner, who was having fun dicing with a master commented, “The track is so difficult to pass on. It’s just impossible. Everybody runs a different line and you have to be on the top or bottom to pass. I really had fun racing with Chris Perley. I don’t know who was worse but it was dicey in lap traffic and when you race with somebody of that caliber I think it made me want it a little bit more.

Vern Romanoski, in a good run, finished sixth with Dave McKnight in an ailing 94 seventh. Mark Sammut, finishing up a good weekend, was eighth, Bob Haynes Jr. ninth and Dave Sanborn tenth. Haynes was presented with the Dion Parrish Memorial plaque and a cash bonus for his run.