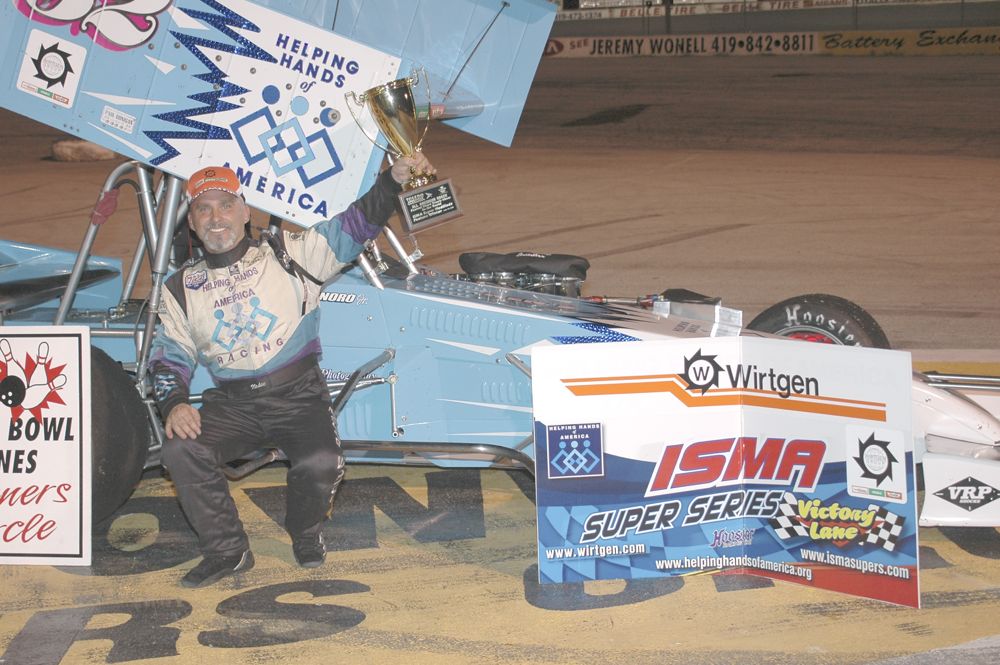 Toledo, OH – Nokie Fornoro chased down Lou Cicconi to take over the lead of the ISMA-Wirtgen 50 lapper at Toledo Speedway Friday night. What turned out as a great battle for the win in the latter stages of the race, looked to be a run away for Chris Perley prior to that. Unfortunately, Perley met with a couple lap cars on lap 38 sending him to the pits with a broken lower radius rod. The remainder of the race was between Lou Cicconi, Nokie Fornoro and Dave McKnight. In the end, thanks to a little chiding from an old friend, Nokie was in the winner’s circle after climbing the front straight wall Tony Stewart style, much to the crowd’s delight. Tony just happened to be that old friend and who just happened to be sitting in the pit grandstand where he has been on this Friday night before Michigan’s Nextel Cup race the past few years. The win for Fornoro was his ISMA career eighth and the first of the young ISMA-Wirtgen season.

Said Nokie after the race, “I’m very happy with the win. Danny had set up the car to come in at about halfway and he helped make a couple chassis changes that allowed me to run up high. It was a good place to pass as everyone else was running down low. I had been talking with my good friend Tony Stewart earlier tonight and he said ‘think you can win this one old man?’ I had to show him I could and climb the fence too. I really had a second place car tonight if Chris had stayed in it. This makes up for Oswego where I thought I had a first place car and I finished 24th!”

Second place finisher Lou Cicconi, who had taken over the lead after Perley’s exit, wasn’t quite sure where all the pressure came from behind him. First it was McKnight and then Fornoro who stormed at the bright 75. He was still pleased with second stating, “It was real good. At least we finished. Everything was good. I’m happy with that run. Where did the rest of those guys come from anyway? They weren’t supposed to pass me!”

Dave McKnight, who came into the Toledo event a little apprehensive after his record at the Ohio oval the past couple years was hot, but smiling after he exited his third place car. “The Patco-401 Trailers-Stage Door Transport team did a great job. We’ve been struggling since last year to try and be consistent. We’re chipping away at it this year. The last three years here I’ve blown a motor so to finish third is a bonus. Chris was definitely a class act. Too bad about what happened. Hats off to Nokie. It’s on to Mansfield and to keep this momentum going.”

A strong contingent of supers were on hand to give the large, enthusiastic crowd a show. And, that they got. The early race lead was swapped between Bobby Santos, Mike Lichty and Dave McKnight before The Rowley Rocket moved up to take the lead from McKnight going under the Canadian in turn one on lap 8. Perley took off and began to lap tail end cars by lap 14. His run looked like a repeat of the ISMA opener at Oswego. It was not to be however.

On lap 19 the 7 of Charlie Schultz and the 8 of Waterford winner Justin Belfiore brushed and flew the yellow. Both restarted although Belfiore dropped right back out. The field was grouped behind Perley but there were three lap cars between his 11 and the 94 of McKnight. Trailing the Patco machine was his teammate Mike Lichty, Lou Cicconi, and Bob Santos.

Perley was long gone once again as he continued to lap cars. Bob Magner spun off to the infield on lap 25 but no flag flew. Only Perley was flying at this point. He lapped fast time trailer Ray Graham on lap 30 leaving McKnight and Cicconi mired in his wake.

Lap 37 proved Perley’s demise however as he approached the V2 of 16-year old rookie Danny Shirey and Joe Petro. Shirey bobbled causing Petro to spin and Perley catch a tire. At first it looked as if only a flat tire was the problem but pitside the crew determined that a radius rod was gone and Perley’s run was done. “I think I’ve inherited the Ordway luck,” said Perley afterwards. “It just seems like I’m having his luck from last year.” Mike Lichty used this slowdown to put for a new tire also.

Back underway, Lou Cicconi was now the leader with 7 laps to go. McKnight and Fornoro sat behind with five lap cars in between the top three and the rest of the pack. Mike Lichty had pitted out of a top five spot during the yellow and was now working his way back through the field.

With six to go Fornoro rode high around McKnight and set his sites on the leader. Santos and Lichty made up the top five. With four to go, Fornoro drove the Soule 32 around the high side of Cicconi for the lead and the win. McKnight tried with all his might to take second from Cicconi but to no avail. Lichty ran into fourth while Mark Sammut made a last lap charge around Santos for fifth.

Lichty was semi-pleased with his fourth. “I hurt the tire in the heat race and had to run the feature on it. The tire came apart on the caution there. I started way back and drove up to fourth and that was okay. But, I’d like to start finishing one or two instead. I’d like to thank my Dad, Patco, Stage Door Transport, 401 Trailers and all the crew.”

The third Canadian in the top five, Mark Sammut, was extremely pleased with his long run. “That was probably one of the best runs we’ve ever had starting at the back. It wasn’t our best finish, but we started 19th and at the beginning the car was really going. The tires began to go away. We wouldn’t have had anything for the leaders at the end, but to get fifth after how we ran the rest of the day was incredible.”

The ISMA-Wirtgen group were on the road to Mansfield for a Saturday, June 17, 2006 fifty-lapper there.