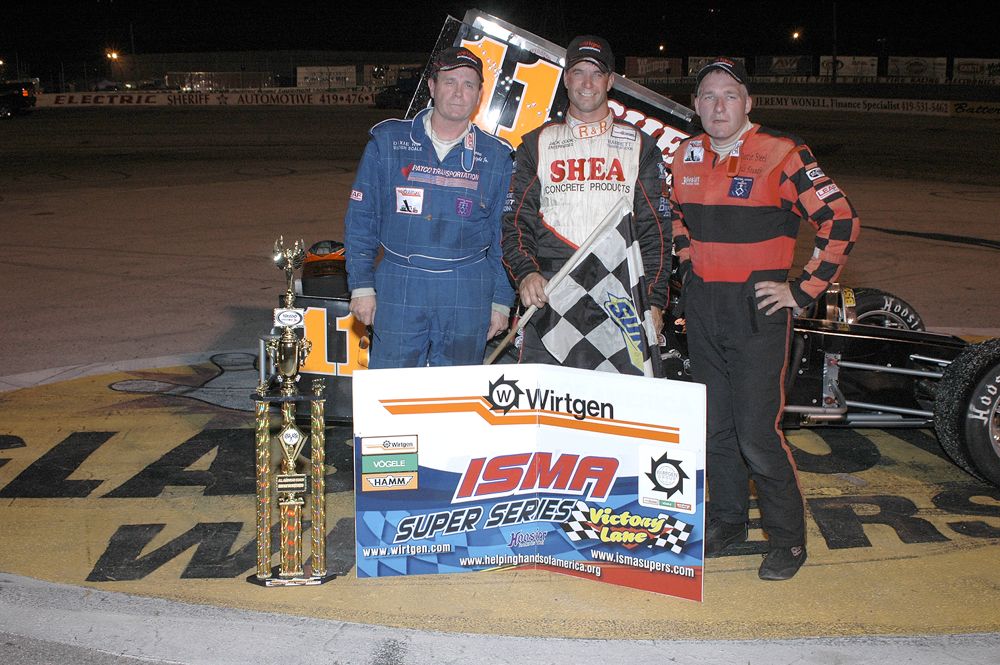 Toledo, OH – You might have thought Chris Perley would have been more confident about winning Toledo Speedway’s 50-lap ISMA event on Friday night. He’s been winning a lot the past year or so. At Toledo’s half-mile oval he broke his own track record in Time Trials with a quick 13.116 lap.

But, the 2006 ISMA champ has been there before and has not been able to finish the past two years. He was a bit apprehensive as he approached the second event of the season. On his way to a record 10 wins in 2006, Chris had three dnf’s – one of which came at Waterford and one at Toledo. On May 26, 2007 he beat Waterford. Friday night he beat Toledo. Lady luck riding in the sidecar and liking it.

And it wasn’t an easy win for the 11. He had to get by Dave McKnight and Mark Sammut, the early leader, who were both running strong. “This is a great place to race,” Chris described his Toledo run. “There is a lot of room out there to play and big banking so it holds your car in the ball park. At the beginning of the race the car was slipping and sliding. I didn’t know if I had enough. I got up to fifth and everybody got harder and harder to pass. I got behind Dave and was running in third for I don’t know how long. Then he said he lost his power steering. One time I’d come up on him and he’d drive away from me and the next time I’d run over him. He was trying to peddle his car and Sammut was running scared out there looking for his first win. I’m sorry he didn’t get it tonight. On lap 22 I thought he was going to win but the red flag helped my tires out and let the car settle in. It was just awesome. I enjoyed it. It was even better to finish here.”

Dave McKnight, who had the Waterford win almost in hand and brushed with Perley on the last lap, had a little déjà vu in this 50-lapper. “The Patco, Back Stage Door number 94 team did a great job. We struggled after the crash while leading at Waterford and we worked really hard to get the car back together. We came out strong and ran well all day here. I lost the power steering on lap 18 or 19 and I was able to hang on until lap 32. But, I had just nothing left in my arms. So we’re lucky to come home with a second. All in all we’re happy and hats off to Chris Perley. I think we have something for Chris. I think we had it tonight but lost the power steering. Chris is definitely going to be the guy to catch and I’m looking forward to tomorrow after we get everything fixed.”

Canadian Mark Sammut once again knocked on the door of his first career ISMA win, but ran into Perley and McKnight who dashed the possibility. Said Mark after his podium finish, “We struggled early but were lucky enough to get the pole for the feature. We made some changes and the car was about the best it had been all day. Those guys just had a little bit more than I did by the time the race went that far along. Hey, we’re happy with third. The car ran great. We just need some more to run with those guys.”

Time trials began the ISMA event with the top 12 of the 25 cars who took time inverted for the heats. Chris Perley was fastest on the day with a new track record, which broke his old track record. Even the True Value sprints couldn’t beat the 11. Brandon Bellinger, Eric Torrese and Mike Keeler did not time as Bellinger had a right rear go down in warm-ups and he hit the wall. Torrese and Keeler had mechanical woes.

Fellow Canadians Mark Sammut and Mike Lichty led the 24-car field to green and Sammut grabbed the point only to have another countryman, Ryan Litt, bring out the yellow soon thereafter. Litt was able to restart and Sammut led the pack once again as Lichty, Dave McKnight. Bob Magner and Robbie Summers settled into the top five.

On lap 8 Burdette Bennett spun the 63 with Dave Shullick Jr. getting a tap from Johnny Benson Jr., driving the Lichty 74. Shullick spun around also and restarted at the rear.

Sammut was lapping cars by lap 10 while Chris Perley was picking his way through a tough field. Just before a lap 22 red, Perley had broken into the Canadian trio of Sammut, McKnight and Lichty to take over third. The red would be for Lichty who came off turn four and blew up in turn one. Lichty’s teammate for the night, Benson, was just getting ready to park his ride prior to Lichty’s demise. The Craftsman truck star said later, “ The engine looked like it started to tighten up on me. So I thought I’d shut it off before it broke. Mike had a problem almost on the same lap. I was just moving out of the way and he had a problem. It was fun for us. I’ve got to thank Brad and Mike Lichty and Dave McKnight for giving an opportunity to come down and play with these guys.”

During this cleanup Larry Lehnert was checked for overheating and Dave Trytek, sitting in sixth, could not restart due to a faulty fuel pump. Attrition was mounting.

It was now a battle up front between McKnight, struggling with no power steering, and Perley, whose 11 was running a little hot. Finally on lap 29 McKnight slipped a little out of turn two and Perley was underneath like a shot, disappearing into the sunset.

The last 20 laps sped by as Perley dove in and out of traffic and McKnight manhandled his machine. Sammut held on to third as Shullick had moved into fourth. Magner lost the battle for fifth when Summers took the spot in the last laps.

Shullick, coming off his first-ever Oswego Speedway win, indicated that “Chris Perley was gone. He was faster than everybody. I think we had a second place car but at the start of the race there was a spin out and Johnny Benson Jr. ran into the back of me and spun me out. I had to go to the back of the pack and had to pass a whole bunch of cars to finish fourth.”

Summers, a modified competitor who is gaining interest in the supers, just couldn’t keep his head straight, literally. “We had a good car,” said Robbie. “I just had some problems trying to keep the helmet on my head. The wind was buffeting it so much, it was moving up and down because you go so fast. It’s something I just have to get used to with these cars. Howie and the whole crew gave me a great car and we’ll take the fifth place and go on to M40.”