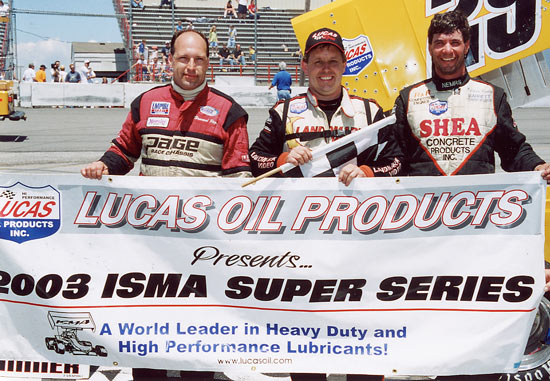 Toledo, OH – After losing their feature to rain on Friday night, running at Sandusky on Saturday night, the ISMA-Lucas Oil super series headed back to Toledo on Sunday to complete their show. In 2002, Chris Perley set a new track record at that fast Ohio oval, but had to settle for second when Wood took the feature. It was a repeat scenario after the 50 lapper was completed under sunny skies Sunday. Wood stood in victory lane with the trophy while Perley was again second. Quipped Perley to Wood, “Next year you can have the track record!”

Wood, after a strong Sandusky win, continued to roll on Sunday. He came up from 10th to pressure leader Howard Page and by lap 30 was by and pretty much gone. Said Wood, the 2002 ISMA-Lucas Oil champ, after the event, “This car runs awful good here. The crew gave me an awesome setup. It comes around about half way in the race. By the end it’s perfect. You couldn’t ask for anything more. I have a great team and I want to thank all those guys on the Dunigan crew.”

Second place finisher Perley was bottled up in traffic behind the high flying Wood for many laps and when he finally got by, he had Page to contend with. In turnabout fair play, Wood then became bogged behind the 16 of Jim Shirey, allowing Perley to catch up, but once Wood cleared Shirey, Perley was stuck playing the same game. He said later he didn’t feel he could have caught Russ. “I hope this isn’t a real trend. A fourth the first race, a third the second race and another second today. Hopefully we can move up one more spot. At least we got the race in. No rain. The crew did a great job this weekend. I have to thank R&R, Shea Concrete, Smith’s Fire Systems, Perley’s Marina and everyone who helps out.”

Howard Page, who led almost half the 50 laps, was a happy third place finisher. “The car got a little hot, but third’s better than fourth I guess. The car was good all weekend – both places. I just had a little overheating problem. Not sure what’s causing it, but we’ll get it straightened out. The car worked real good other than that.”

After a short warm-up period, ISMA went right to work at getting their feature finished with Justin Belfiore easily taking the early lead. Howard Page, looking for an elusive winged win, charged by Belfiore to lead by lap four. The race ran at a torrid pace as Page was lapping cars soon after assuming the lead. Belfiore, Timmy Jedrzejek, Wood, and Perley ran nose to tail a distance behind. A damaging yellow dropped on lap 22 when Dave McKnight lost a rod in the motor of the 94. He spun wildly off the track in front with a puff of smoke and flames shooting from the motor. In the meantime, out back, Bobby Santos , almost simultaneously lost a right rear hub taking the Lane 97 hard into the wall. Both cars were removed from the scene while Lou Cicconi, who had suffered damage the previous night, parked the 75 with an overheating problem. The 19 of A.J. Davis also had to call it a day when his car expired in a flume of smoke.

When things got back underway, a lap car sat in between Page and Belfiore while Wood, Jedrzejek, Perley, John Payne, Greg Furlong and the rest of the pack bunched up behind. Wood picked off Belfiore, the lap car and finally the leader as his car began to pick up momentum. On lap 30, coming out of turn two, Russ was by Page and headed to victory. Perley was working on Page when the 88 of Payne appeared to have blown a motor also bringing out the yellow on lap 38.

On the restart, Wood took off as Perley bonsaied by both Page and a lap car. Only a lot of pavement stood between the 11 and the 29 now, with 11 laps to go. Perley’s only chance now was traffic. On lap 43 Russ came up behind two racing, but slower cars, allowing Chris to make up some distance. Mired behind the 16, Wood lost ground to Perley, but when the 29 broke free on lap 48, the loss was regained. Perley had to work by the 16 also, but time ran out on the “Rowley Rocket.

At the checkered it was Wood, Perley and Page, the top three with Timmy J and Greg Furlong finishing up the first five. Jedrzejek and Furlong both had suffered misfortune the night before and both were happy to just finish.

Said Timmy later, “At least we made it to the finish this time. That’s an improvement after last night. We had a decent car. I knew from the start that we didn’t have a real aggressive car. I had enough to maintain fourth place and just make it to the finish. The car was real loose. It might have been the sunlight. It is a lot different today than it was Friday night. Friday night we were awful good, but today we just missed a little bit. So, we held on for fourth.”

Furlong, whose crew worked well into the night replacing broken parts on the 72 was smiling when asked about his fifth place performance. “I had a good car. We were a little tight in the first warm-up, and we thought we’d loosen up, but we stayed tight in the feature. Overall we had a very good car. I just hoping it would loosen up more than it did. Hey after last night, I’ll take a fifth. We’re happy. It was a good finish. We had a lot of damage last night. We replaced the front axle, half the front end parts, rear parts, wing struts, bird cage…we had a lot of dings here and there.”

The next race for the ISMA -Lucas Oil super series is at Star Speedway on June 21; a date recently added to make up for shows lost to weather.