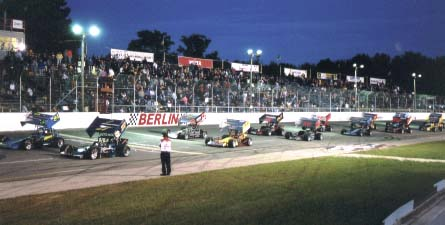 Marne, MI – Chris Perley had what you might say was one nice weekend. On Friday, he set a new track record at Toledo Speedway and finished second in the ISMA feature. Saturday, he started the evening with a heat win and topped that by winning the 50 lap feature Perley finally put it all together and in so doing, brought home a hefty $4500 paycheck for car owner Vic Miller. Perley stormed up from his ninth place starting spot to take the lead from Ken Bell on lap 23. The Rowley Rocket shot past all the field up to fifth place finisher Mike Ordway before he was through.

Said Perley in victory lane before a large, cheering throng of mid-west fans “Finally. This has been long overdue obviously. It’s been since Seekonk last year since our last win. We’ve been struggling. We’ve been picking up. We got a second last night. That was good. And, what a way to cap it off, with a win. It was nice to be able to race again and boy the lap traffic gave us a lot of racing. I’d like to thank my sponsors, Perley’s Marina, Shea Concrete, Smith’s Fire Equipment, New England Motor Racing Supply and R&R Engine. They build one heck of a motor.”

Joe Gosek, who tried to catch up with Perley in traffic late in the going redeemed a dreadful start to the weekend by finishing second. A broken mag, Friday, right at the start of the event sent him to the pits out of the competition. Joe was much happier with Saturday’s finish. “It was a good run,” said Joe,. “I’ve been second here three times in a row since I’ve driven for Paul Dunigan. It’s a rebound from last night where I didn’t start.

I wanted to finish well. My car was good, but not quite good enough. Chris was real consistent and he broke traffic when he wanted to. That was important. He got out there on the restart and was able to take off. It was tough going out there. I had to work for every spot I got. Second was great. ”

And, Russ Wood, Gosek’s teammate, who had won Friday night, and who lost second in Berlin’s feature to Gosek, said “I’ll take it. My car was really tight. A lot tighter than we wanted it. We thought the late models would mess the track up so we tightened the car up and it was too much. I couldn’t work with it. But, we can’t complain. I just couldn’t maneuver with the push, so we’ll take the third. We had a good weekend.”

An hour rain delay just prior to the beginning of the Berlin heats didn’t dampen the excitement of the racing one iota. After a speedway heat win, Ken Bell was loaded for bear and in a three-abreast move off turn four on the green, Bell took up the lead shuffling the front row of Denny Fisher and Howie Lane backwards. Bell tried to pull away a little, but two quick yellows fell on lap 4. The first was for Timmy Jedrzejek who had a tire go down and almost went off the back straight. Timmy was able to restart, but on that

green, Jon Gambuti slide across the front straight and into the wall. The 88 was hooked off the track.

But the black 11 was on the move and by lap 10 he was fourth. On lap 11 he was second while Lichty held off Joey Payne, Russ Wood and McKnight. Bell continued strong out front as he began to lap slower cars. On lap 18 a pack of lap cars ahead slowed Bell a little, allowing Russ Wood to move up on Perley.

A lap 20 yellow flew for Scott Martel who was pushed into the pits for a quick repair. Howie Page, McKnight, and Jamie Timmons also made quick stops. Bell had a couple lap cars providing a cushion between his car and the 11 of Perley on the restart and what a restart it was. Perley and Wood sandwiched the lap cars and set up chase while Joey Payne, Joe Gosek, Mike Ordway, Lichty and Timmy J closed in.

Perley was now right on Bell’s bumper where he stayed for two laps before putting Ken’s excellent run out front to an end on lap 23. It was all Perley from thereon in as he began picking off car after car with Wood, Bell, Gosek, Payne and Ordway in pursuit.

Payne’s top five run ended on lap 34 when a hub broke and he pulled the Lane 9 in leaving fifth to Ordway.

Perley was up for the challenge, however, and he eventually put them a lap down while Gosek, who had gotten by Wood a few laps earlier in traffic, tried to close on Perley in the waning circuits.

When Perley thought someone was close, he took off even faster and crossed under the checkered well out front of Gosek, Wood, Bell and Ordway, the last car in the lead lap. Bell, who had had his best run in sometime, was still pleased with fourth. “We were quick the first 25 laps or so,” said Ken. “Then the caution came out and the car seemed to get loose going in and it had a little bit of a push. The three others guys were quicker than I was, so we held on to fourth and hopefully we can keep finishing in the top five. We’re

happy. We did good finally. Hopefully we can keep doing this. ” Ordway was the quiet man in fifth. Said Mike, “The track was a little dirty and the car was a little off. We just ended up fifth. It was probably all we had tonight.”

ISMA’s next outing is a newly added event on June 29 at Cayuga Speedway in Ontario where Winston Cup star Tony Stewart will race against the best in the east in a supermodified.