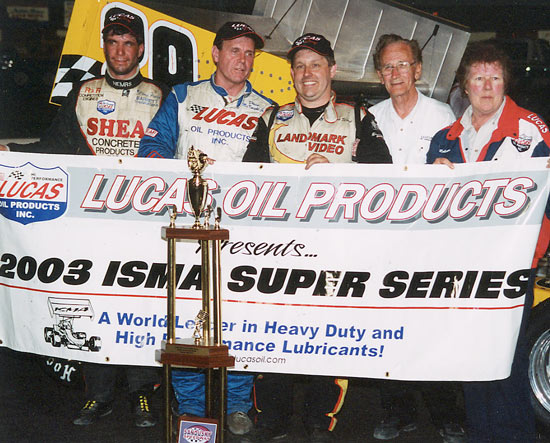 Sandusky, OH – The sun finally shone on the ISMA-Lucas Oil Super Series Saturday and it gave the fans a great show. Russ Wood, who started twelfth in the field came on to challenge leader Justin Belfiore just past halfway, taking the lead from the Ipswich, Mass. driver on lap 45. Belfiore didn’t give up easily and the pair battled back in forth in traffic until Belfiore was involved in a lap 62 accident.

Wood finished up the 75-lapper pretty easily after that to take what was only the second completed feature of the ISMA season to date.

Russ summed it up in victory lane. “We had an awesome car all day in the warm-ups. I was hoping it would stay that way in the feature. I was a little worried about Chris and a couple other guys like Timmy J and Dave McKnight that were running good. But, our car was really good. Timmy J was taking off there for a while, but I was going to stick to my game plan and save some tire for the end. I think we would have had something for him at the end if he was there. Justin was also running really good. He surprised me. He came back at me once.and woke me up a little.”

It was a strange one from the start actually, as outside polesitter Jack Smith broke a heim end on the push off laps sending him pitside and allowing bubble car Lee Boss to join the field. Randy Burch took up the initial lead in the much anticipated winged feature. The next to lead was Denny Fisher who stormed by Burch on lap 5 and was off like a shot on the recently repaved Sandusky oval.

Lap 8 found yellow flying for a multi-car tangle which found several cars involved and Eric Lewis’ 28 on the hook. Fisher held his own on the restart with a hard charging Justin Belfiore on his tail. Burch, Howard Page, Russ Wood and Timmy Jedrzejek diced right behind. Jedrzejek moved into second behind Belfiore by lap 20 and with some of his Enerco-Mr. Heater sponsors on hand, Timmy was looking for the checkered for sure. Jedrzejek put on a show trying to get by Belfiore, who was just looking for his first ISMA win ever. Howard Page held onto third with Wood and Dave McKnight now the top five.

By the midway mark the 8 and the 7 approached a massive pack of cars which were about to cause Jedrzejek’s demise. “I was on the throttle,” said Timmy later, “and I just got too close to a lap car.” The yellow had flown and the red 7 was on the hook instead of at the front. The 91 of Boss checked out on this one also. Justin Belfiore alone at the front for the time being but another quick yellow bunched the field on lap 39 putting Wood on Justin’s tail. The chase was on again, with Wood the pursuer of the former Eddie Bellinger car that Belfiore’s famous car builder dad had reworked over the winter.

Wood got by Belfiore on the outside in turn two of lap 45, but Justin gave Wood another couple scares, especially when they were maneuvering through packs of traffic. Dave McKnight, Page and now Chris Perley, who had started “back in Toledo”, were the top five with less than 15 to go.

Belfiore became the victim of another multi-car tangle which brought out the red on lap 66. “I actually thought Russ had lost his tires about ten laps after he passed. me,” said Belfiore.. “I wasn’t going to pressure him that quick. I should have waited for five or six laps. I just got excited. It’s been a long time coming. I’m happy that we finished. I just have to thank my father for tuning this thing up. I just got tangled with Joe Grunda there. I just got in a little deep. It was an unfortunate thing. I was so wrapped up on what Russ was doing and I didn’t give him a lot of room.”

After this cleanup, several cars had exited on hooks including Greg Furlong and Pat Shullick. The whittled down field took the green on lap 67 with Wood out front leaving Dave McKnight in second, Perley, Brad Lichty, Randy Ritskes, Ken Bell and Denny Fisher, among others, still racing hard.

At the line Wood crossed well ahead of second place finisher McKnight, who commented on his finish by saying, “Well it’s not raining. The Lucas Oil, Patco car was running really well until we bent up the front nose wing there in that jingle and it never worked as good after that. The team worked hard all day and we’ll take second. I’m really happy with the finish.”

Perley, who was more than pleased with third after his strange day, said “I think I forgot how to drive in the heat. Started to learn again in the consi and I figured it out in the feature. I really don’t think I’ll ever get this place figured out. I mean you can’t beat it. I think third place is great. I don’t know what to say. Everybody worked hard and it worked out. You had to kind of wait. I was afraid of getting lapped at the beginning. You don’t know how quick they are coming. Somebody gets an open track and they are gone.”