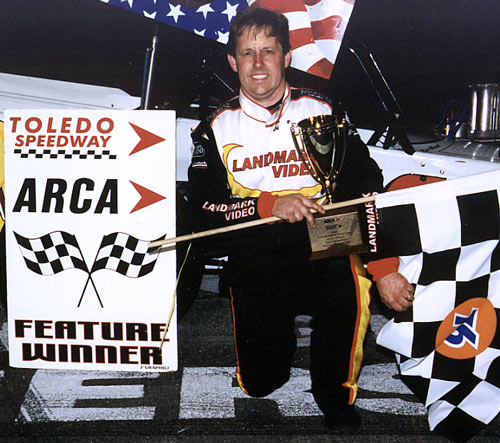 Toledo, OH – Russ Wood was nosed out of a new track record at Toledo Speedway Friday evening, June 14th, by Chris Perley by a mere .012 seconds. Perley set the NTR with a 13.222 on the banked half mile, but it was Wood who stole the ISMA feature win from Perley several hours later. The patient Wood held the Dunigan 29 back until a caution just approaching the midway mark. On that restart, Wood turned up the afterburners and headed for leader Perley. On lap 24 Russ was fourth. On lap 26 he took second from Pat Shullick and one lap later, he drove by Perley for the lead and the win. The $3000 payday was Wood’s first of 2002 in the still young ISMA season.

Russ and Perley quipped back and forth in victory lane. “I let him by,” said Perley, “I figured I had the track record so he could have the win.” “Yep,” retaliated Wood, “That Perley is such a nice guy. He let me win because he already had the track record.”

In actuality, Wood attributed his win to one heck of a race car. “My car was awesome. It gave me a lot of confidence. It felt so good all day. I was just cooling it there. Letting things get sorted out there and saving my tires. A lot of guys chewed their tires up in the heat. I cooled it in the heat. The tire was like new before the race so in the feature tires were not a factor for us. The car just felt wicked good and I just picked my moves and went for it in the end. Guys seemed to be pushing up and my car was hooked up down low. I just let the car go where it wanted to go and it seemed to like the bottom better. That’s where I did most of the passing. Late in the race there traffic got heavy but they were all pretty stable and I just took it as it came.”

And truthfully, Perley hadn’t even expected to be around at race end because of tires. “I was psyched because we had a blistered tire after the heat and I honestly thought that we were just going to pull in after a couple laps. It kind of healed itself after a while but I had to run slow the whole race to save anything for the end. I’m ecstatic with second. Pat almost got me at the end because I had nothing left. But I had nothing to save in the first place. I’m really happy with second. We’re making progress with the car.”

A 25-car ISMA field came to the green led by teammates Pat and Dave Shullick Jr. before a capacity Toledo crowd. Pat Shullick grabbed the point, and Chris Perley was quickly up to challenge the Vermilion driver.

A quick yellow fell on lap 4 for a spin by Jen Chesbro. On the restart, Perley put the pressure on Pat Shullick but Pat held on for two more laps before Perley got him off four. Mike Ordway, Lou Cicconi, Timmy Jedrzejek, Wood, Dave McKnight and Scott Martel all were in the mix as things started to sort out.

Perley was well ahead of the field and by lap 17 he began to lap the slower cars at the tail of the field. Pat Shullick ran second as an intense battle developed for third with Ordway, Cicconi, Timmy J., McKnight, Wood and Martel.

Suddenly on lap 22, the 75 of Cicconi just touched the outer wall but it was enough to damage suspension parts and Lou came to a halt out back. He was pushed off, but pitted out of the running.

Perley took up the point on the lap 22 restart, but veteran observers watched as Wood began his march to the front. Smooth and quick he put the 29 into second and then into first by lap 27. From there on, he was out of reach as Perley fell into second ahead of Pat Shullick, Timmy J, Ordway and Martel. On lap 35, the 61 of Ordway pulled suddenly into the infield with a badly blistered tire. He was running fifth at the time engaged in a war with Martel, McKnight and Jon Gambuti.

With ten to go, Wood entered the heaviest traffic of the race, but he seemed not to skip a beat. Perley ran alone in second a the time as Pat Shullick diced with Timmy J for third. Scott Martel had moved into fifth while rookie Jon Gambuti diced back and forth with Dave McKnight behind Martel.

A lap 47 yellow for the 78 of Mark Sammut and things looked really interesting as the end approached. Wood, however, had three laps cars between his 29 and second place runner Perley. At the finish, Wood crossed easily under the checkered as Perley held second, but in the traffic, felt Pat Shullick move in on him. Timmy J also tried to use the slower cars to gain a spot, but to no avail. Scotty Martel, a winner of the last ISMA show, rounded out the top five.

Timmy J admitted later using some wiles at race end. “Fourth place was good. The first half of the race I settled in but then I knew I had to take off. At the 20 lap mark, right before that caution, the car was really, really fast. I don’t know what happened, but after the caution the car didn’t run as good as it did earlier. So, I settled in for fourth and hoped I could hold on. The lap traffic got pretty exciting there at the end. I knew I didn’t have a chance to get ahead of those guys without using lap traffic so I tried to sneak one by but it didn’t work out so we’ll take the fourth and hope to do better at Berlin tomorrow.”

Scott Martel, who had stormed away with a heat win, went into the feature shy on rubber. He was satisfied with fifth. “It was a tough fifth, but we’re happy with it. Going into the race we had a badly blistered tire so I had to go out and pace myself. In reality, going in I knew I’d have to pace myself and I did what I had to do. So a top five is something we’ll take and be happy with it.”

The ISMA contingent moves on to Berlin Raceway in Michigan for a Saturday night 75 lapper.