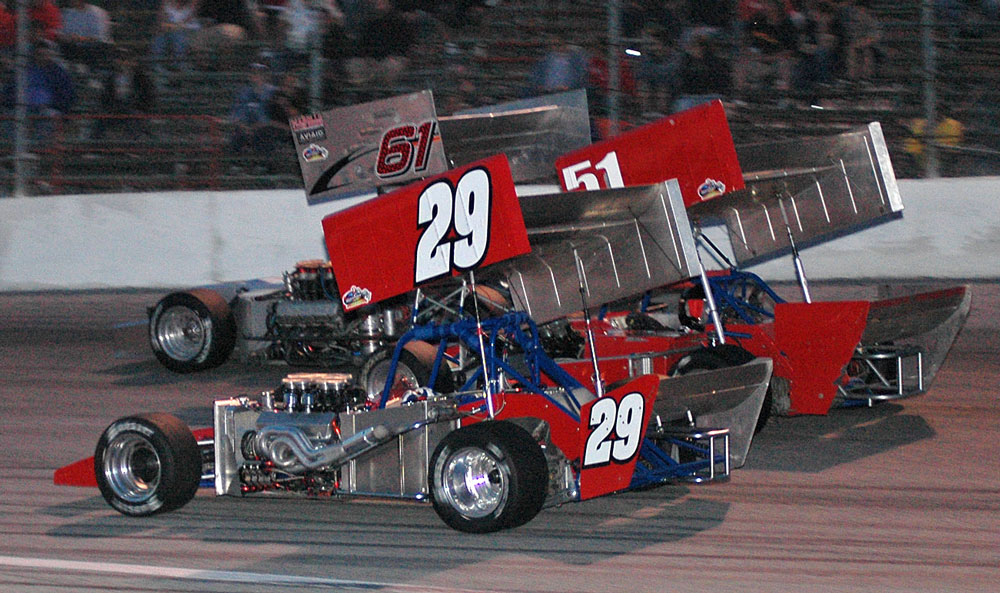 Toledo, OH – Russ Wood became the first ISMA driver to win three features in the 10-year history of competition at Toledo Speedway. Wood, in the Holbrook 29, was running fourth with two laps to go when the yellow flew a Bob Bond crash into the wall. In the ensuing cleanup, Chris Perley, running third, fled to the pits for a new tire. Wood was now third. Dave Shullick Jr. sent the field into mayhem on the restart when the motor blew on his high flying 61. Cars scattered and spun every which way. Mike Lichty, who would have been the leader now, was sent to the rear for being involved in the caution. Russ Wood now sat in the lead spot and stayed there for two laps to win his first ISMA race since July 2005.

Wood was a little surprised to be in victory lane, but as the old phrase goes, you have to be there to be there. He said after the chaotic finish, “I think we had a third or fourth place car. But that’s racing. We were hanging in there to be in a place to be here. A couple guys broke or had problems and we were able to take advantage of it. We were pretty good, but not up to snuff to run with Chris or the 61 but we did all right. It was good in traffic. We were a little loose. We had struggled with it today. We’re lucky to even be here after the ride out. We’ll take the win. It’s been a long time since our last one here.”

Finishing second was Mike Ordway Jr. who had been running near the front for most of the race. He commented, “We were fortunate not to be in the wrecks. We were there at the end. That’s what happens. We started off good. We had a yellow pretty quick there and then we had a long green flag run. The car wasn’t that good at the beginning and then it got better on the long run. We lacked side bite all night. I had to wait on it Russell got by us and then we caught him. We got into so much traffic, I couldn’t do anything with him. With two to go we had that big deal when the 61 broke. Cars were going everywhere. I just steered through it. Russell went low and I went high. We both came out in the front. We’ll take it. “

Finishing in third was Chris Perley, who earlier in the day had set a new track record (breaking his old one) with a torrid 12.89 lap only to lose the title to an AVSS driver Jason Blonde who clocked a 12.744 on the half mile banked oval. Perley, too, might have had a chance at the win when Shullick exited, but the flat had cost him that.

Said the Rowley Rocket,” I had a good car. It took a while to come in and when it came in I thought it was going to be a little too late. But we had fun. We came up through. We got mired in a lot of lap traffic. Then we started getting a flat tire with probably ten or twelve to go. We were lucky that caution came out with two to go because that’s when it was really flat on the rim. It was going soft, going soft and then it got really bad. We almost spun out a few times. Somehow we changed the tire and then those last two laps we got into third. We probably shouldn’t have done that either. So we’ll take it. I feel bad for Lichty. I mean to be second and have the leader break and then you get put back it’s like “holy crap.”

Mike Lichty had been the early leader and was establishing himself in position to get that elusive first win as the laps ticked quickly away.

Lap 12 saw the first slowdown when Jeff Holbrook brushed the wall. On the ensuing restart red fell when Vern Romanoski and Jeff Abold came together as the pack entered turn one. Several cars including Gene Gibson and Jack Smith were hooked along with Vern and Jeff. Pitting here were Johnny Benson, Bobby Haynes Jr. and Brandon Bellinger, and able to return. The cleanup was advantageous for the Holbrook 35, which was able to get back into the fray.

Lichty took off on the green and looked, as in some many times in the past, to be a possible first-time ISMA winner. The battle for second, between Dave Shullick Jr. and Trent Stephens, however would change that. By lap 25, Shullick was perched to pounce on the leader, but still had some distance to make up.

The pounce came by Shullick as heavy traffic had cut into Lichty’s lead. Shoe II was by for the lead in turn two as now Lichty had Perley right there to challenge.

Yellow slowed the race on lap 33 when Larry Lehnert slowed and pulled pit side. The field was now bunched with a lot of lap cars intermingling with the lead cars.

Shullick had the cushion and the car and off he went. Facing several lap cars ahead was Lichty and then Perley. Also facing some traffic, Stephens, Wood and Ordway Jr.

With ten to go, Shullick was in command and on his way to a possible second ISMA win in a row. Jeff Locke slowed the progress on lap 41.

On this restart, Perley moved the 11 into second but a couple lap cars were still ahead of him before Shullick could be seen in his sites. Lichty, Wood, Ordway Jr. Stephens, Reid and Bob Bond were next in line behind when the yellow flew on lap 48. Bond and Reid came together coming off of turn 4 and Bond ended up in the wall in a devastating crash. While the 25 was flatbedded, Perley came in for the tire.

It was on this restart that Shullick’s 61 failed, creating a ripple effect behind him as everyone had their foot down. Shullick was able to slide into the inner track area while cars scattered all over.

When the green waved again, Russ Wood was the lead car with Ordway Jr., Stephens, Perley, and Mark Sammut next up, with at least three laps cars in between. Wood crossed under the checked for the win followed by Ordway Jr. Perley got the jump on Stephens to take third while Trent and Sammut crossed in fourth and fifth.

Stephens, in his Stout ride, was pleased with his first ISMA top five. “The first ten laps I was kind of taking it easy. I didn’t want to burn up the tires about half way through it started getting loose. It kept getting looser and I was just holding on there for a while. The last two laps I figured I could do something but those guys must have saved their tires. I didn’t have anything for them. But hey, we’re in one piece and avoided all the wrecks. This isn’t too bad for my first ISMA race.”

Sammut came in fifth after a little confusion. I figured we should have been fifth. We had a terrible car all day. We couldn’t get going. We had oil pressure problem so we were working on that instead of the car. By the heat we had it going a little better. In the feature we weren’t too bad but we pretty much wore the tires off coming up through. At the end I was hanging on. At one point in the middle of the race, when I cleared traffic, the car was actually the best it had been all day. A few laps later the tires went away and I was just riding around at the end. I was lucky to avoid the accidents.”