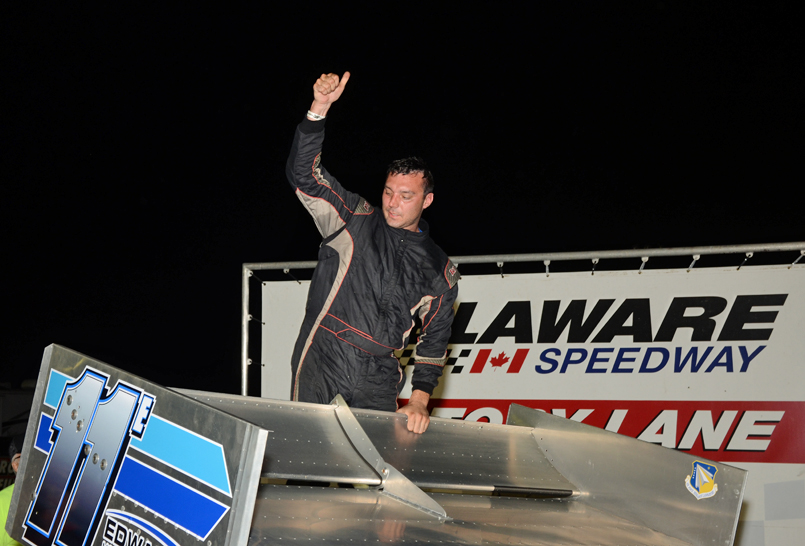 Delaware, ONTARIO – Kyle Edwards of Bartlett, Tennessee picked a good time to win his first ever ISMA feature on Friday night as the 50 lapper was the first leg of the Harvey Lennox Memorial Tammy Ten Bonus Fund. Thanks to Arctic Equipment, Corr/Pak Merchandising, Murray’s Transmission and Patco Transportation, an extra $7000 bonus payout will go to the top five ISMA car owners based on points from this Delaware race, the Jukasa July event and the second August Delaware race.

Kyle’s win put him and his car owner dad Doug at the top of the list with his victory. Edwards has become a regular ISMA competitor the past few years and has shown on more than one occasion that he was closing in on a top spot. Friday he accomplished the feat.

Said an elated Edwards in victory lane, “I have to thank everybody. It starts with my dad, then we have a great powerplant thanks to Level Performance, the Bodnar wing, just everybody who helps out. We made some changes to the car over the winter and it seems to be working well. We have a new Hoosier tire that seems to be working better than it has in the last couple years. This is a great way to start the season. Hopefully we can keep the momentum going into tomorrow.”

Making a strong run to challenge for the lead was Mike Lichty who has consistently vied for a Delaware win, only to fall short.  But Lichty was happy with second.

“We started back in 12th and it was fun out there. I’m glad we’re able to pass again and put on a good show. I’ve got to thank everybody. The crew from Reeds and Patco. Everybody, BJ, Dickey, Dave, Dad, Craig … everybody who helped out here. We were decent during the day and starting 12th we knew we were going to have to pass some cars. There was some good battling coming up on through. I’m just happy we had a decent turn out, no rain and we’ll go on to Lancaster.”

Timmy Jedrzejek who has one win at Delaware dating back to 2012, was also pleased with a third place.

“It was a good night; a great way to start the season. It was a good third place finish. It’s always great to be on the podium here at Delaware. I love this race track. It gets pretty racy at night I think. It grippens up a little bit on the outside and a little bit low on the bottom. I thought we had a really good car there. We came from tenth to third or fourth there in the first ten laps of the race. I said man we got something. Then it seemed to tighten up as the race went on. Don’t get me wrong, we were a third place car and I am ecstatic with third. We just weren’t better than Edwards and Lichty tonight. I’m happy for the Doctor Mom Says School is Cool, Essex Seafood, Enerco – Mr. Heater, Scott Auto Clinic car finish and thank them and everybody else who helps out on this team as well as the crew. It’s a great start and head for Lancaster to see if we can do one or two spots better.”

Jim Paller and Moe Lilje brought the field of 18 down to the green with Lilje jumping to the early lead with Paller, Michael Muldoon, Edwards and Dan Bowes in pursuit.

Lilje tried to pull away but on lap 8 the yellow flew for Michael Muldoon stopped in turn three.  Trent Stephens and Dave McKnight made quick pit stops while Muldoon was hooked.

Lilje tried again to distance himself from the pack on the restart, but only two laps were complete before yellow flew again for Rich Reid and Dave Duggan sitting in turn three. Both of these cars were able to restart.

Moe was off again in the lead only to have Edwards closing in on his tail. Paller, Jedrzejek, Bowes, Lichty and Mark Sammut were close behind the lead duo.

On lap 12, three-time Delaware winner Dave Shullick Jr. slowed and the 95 headed pitside and out of the competition.

No yellow fell here and but Lilje fell victim to Edwards who took over the lead with Lilje, Timmy J, Paller and Lichty top five.  Lichty would soon put Paller down one but the action behind saw Delaware 2017 winner Mark Sammut moving in on Lichty while Paller contended with Dan Bowes and Mike Ordway Jr.

The action was fast and furious as Edwards began to put some distance on Lilje, Lichty, Jedrzejek, Sammut and Paller with Ordway, Trent Stephens, Bowes, Mike McVetta and Ben Seitz still in the mix.

On lap 31 the action slowed and it was Paller who flew the yellow as he spun in turn 2. He was able to restart but the field was now bunched behind Edwards.

Lap after lap the positions changed behind Edwards. Lilje lost a spot to Lichty then Timmy J got by Moe, now in fourth.

Just before the ten to go signal, yellow came out for Talon Stephens who went pitside out for the night.

As the laps wore down, Lichty was all over Edwards while Timmy J was contending with Ordway for third. Mike McVetta had now passed Trent Stephens. With six to go, Ben Seitz, in the new Soule 32, brought out the last of the yellows and was also headed into the pits. Dan Bowes made a quick stop in the interim.

With five laps to go, it was Edwards’ race to lose and despite the pressure from Lichty, he wasn’t about to do that. At the line it was Edwards, Lichty and Jedrzejek in podium finishes with Mike Ordway Jr. and Trent Stephens rounding out the top five.

Ordway, driving another new Clyde Booth creation, said, “This is not too bad for a brand new race car. We started pretty deep and just did what we could to get through there.  I got a couple lucky breaks. All in all the car was good. Everything is in one piece and we collected some information on it to bring to Lancaster tomorrow and to continue on. I have to thank Delaware Speedway, Clyde and the guys and all the fans for coming.”

Stephens, who has some terrible luck at Delaware, was relieved he finally finished and finished well.

“This is one of our better runs here surprisingly. We ran good in the heat race with the new tires and then we went out for the feature and  I dropped like a fricken rock. This place is tough. We’ve been here six or seven times now and no matter what we do it doesn’t seem to help us in the feature time. Anyway I ended up pitting and we threw the kitchen sink at it and the car was like night and day. The car was really, really good after that and we passed a lot of really good cars. I was kind of pumped up when we got the point where we were catching cars our speed and it was harder. I can’t believe we pitted, came out 16th and drove up to fifth and that was on merit as there wasn’t anyone who wrecked in front of us. I was happy for the guys, Me, Steve, Rich and Sawyer and dad helping out. We worked our butts off and we’re happy with a fifth. Looking forward to Lancaster which I won last year.”