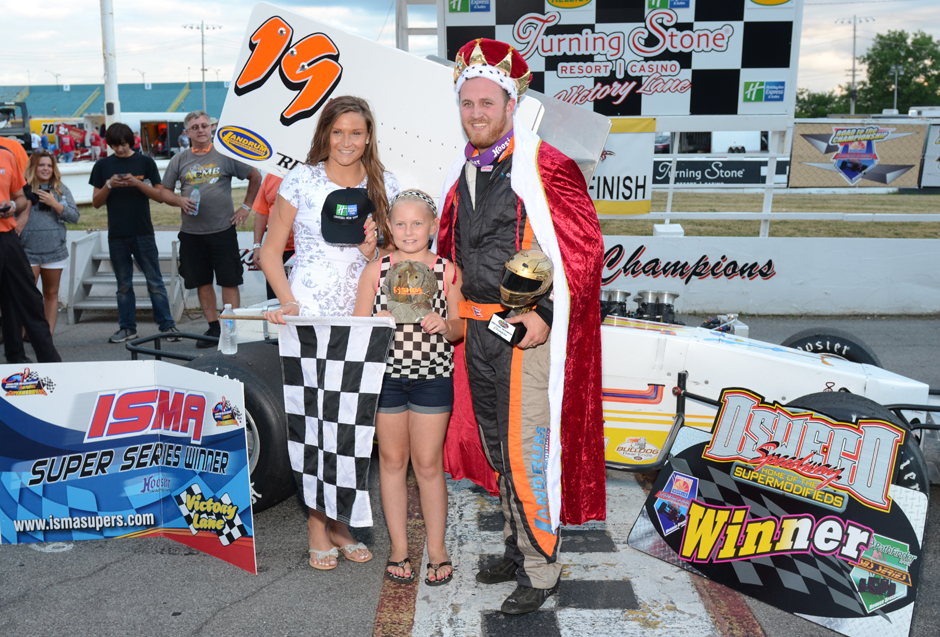 Oswego, NY – Ravenna, Ohio’s Trent Stephens won his first winged race at Oswego Speedway in 2009 in his inaugural appearance at the famed five-eighth’s mile. He waited a long time to score his second win there, but he did so in style Saturday night at the prestigious King of Wings event. Starting third on the grid, Stephens closed in on race leader Moe Lilje, driving the Jimmy Bodnar 76 and got by in traffic on lap 20 as Lilje got hung up by a lap car. Stephens had 30 green laps to keep challengers at bay and it did just that to race end. He was also the recipient of the Shea Concrete Products Halfway Bonus of $1000, adding to his fine run.

Said the ecstatic winner in victory lane, “It feels good to win again here, that’s for sure.  2009 was my first time here and my first win here period. That was pretty cool and now it’s been a long time since then. It’s been frustrating the whole way. But, it feels good to win this one. We were really slow during the day. We qualified real bad. We just kept working on it and never gave up and got the car going really well for the feature. I’m pretty happy with that.”

He described his pass for the lead, “I think Moe had a little issue in traffic and I think I was able to capitalize on it. I’m not sure if I could have gotten him out in open air, but lap traffic always plays a part in these races, especially here at Oswego. It’s hard to pass lap cars here. Luckily that worked out for me for the good in that sense. Later in the race coming up on some of the tail end of the field it was definitely harder and harder to pass them. We have tried some different things on the car and I think that really helped me with getting by lap traffic and off the turns. Those changes showed tonight especially in the lap traffic. Hopefully we can keep getting the car better every time we come here because it’s still not perfect. We’ll work on it. Thanks to my car owners, sponsors and family for supporting me. Now it’s on to Jennerstown.”

Mike Lichty, who had set fast time earlier in the day, almost breaking his own track record, started fifth, lost some ground to the intense battle waging behind leader Moe Lilje, finally was able to break out into second. “We had some problems there getting past fourth as the two guys up front were beginning to come into the tail of the field. But when we did get into second the car was definitely good, but time ran out. Hats off to Trent and the Stout crew for their win. It means something to win the King of Wings at Oswego. I’ve got to thank my Patco team too. Earlier in the week Dickie and some of the guys did a lot of work on the car. I’m looking forward to Jennerstown.”

Mark Sammut did some concentrated moving up to get a podium finish and his third top five since Delaware. “We had the car a little too tight at the start of the race but it worked out good for the end. The car was running great at the end. To bad we didn’t have another 25 laps to try for the win. But being a little too tight wore out the tires. But it was coming in a little better and  a little better those last few laps and its the best we ran. Another podium finish – we’ll take it.”

Moe Lilje, in the 76 and Danny Shirey led the field to green for the King of Wings VIII but no laps where complete before yellow flew for a 3-car incident in turn four which claimed Eddie Witkum’s 21, Tim Ice’s 65 and send Dave Danzer into the pits for quick repairs.

On the compete restart of the race it was Lilje, Shirey, his teammate Stephens and Sammut pulling away as Timmy Jedrzejek, Ben Seitz, Dave Shullick Jr., Lichty, Rob Summers, Mike McVetta, Mike Ordway Jr. and Chris Perley provided some exciting racing right behind. And the race was on as no further flags flew to slow the pace.

By lap ten Lilje had put some real estate between his 76 and Stephens who was now second. Jedrzejek had gotten by Shirey for third leaving Danny to contend with Lichty, Sammut, Shullick and Seitz.

Shirey was able to provide a road block for several laps allowing Lilje and Stephens to flee the scene until they came up on the 25 of Bowes. Lilje couldn’t find a way around for three laps and this set the stage for Stephens who made his pass on lap twenty to become the leader on 21.

It was still not a cakewalk for Stephens as a powerful group raced hard behind him, swapping positions with each other as the laps ticket off. At the halfway mark it was Stephens, Lilje, Jedrzejek, Lichty, Shullick, Sammut, Shirey, Seitz, Summers and Ordway Jr. in the top ten. With McVetta and Perley close by.

As the top two of Stephens and Lilje began to pull away slightly, Jedrzejek felt the pressure from Lichty while Shullick and Sammut left a lap car between them and the next six.

New winner Mike Ordway Jr. looked to be making his move forward as the counter approached the lap 30 mark but unfortunately the 61 slowed off four and slowly proceeded to the pits with no yellow needed, with an overheating problem, ending his day.

With twenty to go Stephens held a comfortable but not invincible lead over Lilje as Jedrzejek, Lichty, Shullick, Sammut, Shirey, Seitz, Summers, McVetta and Perley were racing hot and heavy behind.

On lap 34 the lead duo met up with some of the back of the pack and now maneuvering through the traffic began. Stephens broke through for clean air just before the lap 40 mark but Lichty was able to utilize the situation to move into second around Lilje.

A ten lap spring to the King of Wings crown was on as the leaders continued to encounter traffic in the lightening speed of the race.

On lap 43 an side panel on the Shullick wing flew off and out of the track in turn four. Although the wing on the 95 was bent, it was solid and Shullick continued to the finish but obviously now hampered by the loss.

Stephens could smell victory now as he was able to fend off Lichty and Lilje while Sammut held off Jedrzejek. Shullick held onto to sixth until the last laps when Lorain Friday night winner Mike McVetta stole the spot. Shullick, Shirey, Summers and Perley finished up the top ten.

Lilje, in his second time in the 76 machine had his second top five finish. The Vickery, Ohio driver commented, “We had a good run. We started on the pole and I was hoping to get a win for Jimmy and the rest of the guys.  We started out a little free and obviously as the race progresses you keep getting more free and more free. It becomes more of a struggle to maintain your pace and track position. Trent had a real good race car. He got up into traffic and I got caught up with one of the lappers and had trouble getting by him. I’m not saying that cost us the race but Trent was better in traffic than we were for sure. I think he had a little bit better car. Congrats to him and Mike and Mark Sammut on their podium finishes.”

Timmy Jedrzejek was content with a fifth in the competitive race. “It was an eventful race. It was actually an exciting race as a driver. We moved up a couple spots, we move back a couple spots. I think early in the race I felt like we really had something. We were staying up with the 19 and the 76. Congratulation to the entire Acme team and Trent. King of Wings is such an important race it’s good to have it here at Oswego. I think this race will be enjoyed until the King of Wings comes back here again next year. I’d like to thank my team here – Howie Lane,  Dr. Mom says School is Cool, Essex Seafood and Enerco Mr. Heater for really helping support this deal. We feel were back on the horse now after Lorain when we weren’t’ doing so well. I”m looking forward to Jennerstown Saturday.”