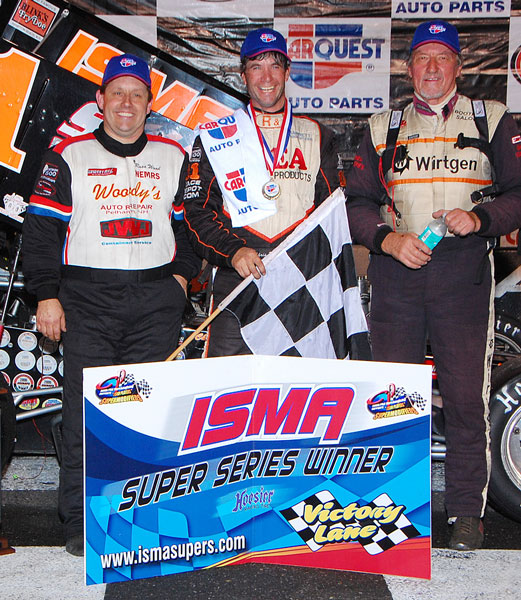 Stafford Springs, CT – Looking at the weather forecasts, one might have thought that Stafford Speedway would never finish their Carquest Xtreme races Tuesday. Prolific rain threatened to put a stop to the night’s racing. But, you would have been wrong. If you thought, however, that Chris Perley would win another Stafford victory, you would have been dead on. While rain delayed the show for a while, it did not postpone it. Perley, having won this race on three previous occasions (2004, 06, 08), started alongside his teammate Bentley Warren and finished just one spot ahead of him at the checkered. Perley’s run to the front was an exciting one to say the least. He took the lead from Dave McKnight on lap 18, and was seriously challenged by first McKnight and then Mike Lichty, who both drop by the wayside with engine woes. At the end, the man dogging Perley was none other than teammate Bentley Warren. The race was checkered on lap 46 due to a yellow, pending weather and fuel constraints.

Perley said in victory lane, “Thanks to Carquest and Stafford for putting this race on again and for sticking it out. I just love this track. It’s a lot of fun out there. I figured we had a pretty good car but you never know what you’re going to get until you start. And once I started I knew I had a better car than I thought. I was just hoping to stay out of trouble and pick my way up through. It was awesome to see Bentley there but honestly I was giving it all I had at the end because I’m not going to leave anything on the table when the old man is behind me. You never know when he’s going to take it from me. I couldn’t do this without the sponsors, my crew and the fans.”

He also commented on the shortened event. “I would have liked to take the race to the end it’s a little disappointing to the fans and to the driver when it ends like that. You want to finish what you started. The guys in second and third want to run to the end because anything can happen to the leader. There was a lot of lap traffic out there. But, I was also thinking about how many caution laps we had run. I knew we were getting close on fuel and I was hoping the crew had fueled it up pretty good. That’s why you want to finish 50 laps. You never know what’s going to happen.”

Bentley, who won Stafford events in 1968, 69 and 1980, was obviously having fun. Starting in 11th, he diced in and out of heavy traffic, making some daring moves to get within sight of Perley when the final yellow brought out the checkered. That last restart might have made for one heck of a shootout between the teammates, but fuel was definitely at a minimum at this point.

Said Warren chuckling, “I was having a great time. As usual Vic, Chris, Leo, Mike and all the guys do just a heck of a job with this racecar. It’s fun to drive. It was fun to finish one-two but I would have rather passed him. If he was nice he would have waited for an old man. But, he never waits around and that’s why he wins all the time.”

The third member of the same trio to stand on Stafford’s podium in 2008, Russ Wood, indicated, “It was a hard battle out there. Everybody was slipping and sliding. Our car wasn’t that good in the beginning. It was getting better at the end. I had to stay on my toes on a couple restarts trying to grab a few spots. Those two cars in front of me are the ones to beat right now. Finishing third to them isn’t too bad. Congratulations to those guys. Thanks to Carquest for having this show.”

Gene Gibson and Vern Romanoski led the 28-car field down to the green as sprinkles dotted the way with Vern taking the point. A yellow fell almost immediately for a jingle that left Jeff Locke and Ordway Jr. back at the tail. Another flag fell for Danny Lane on that restart and again on the second restart for the Dinnen 56. Sprinkles once again persisted but so did the officials and drivers. They held on.

Green stuck on the third attempt as Romanoski’s bright green 5 led the way while Dave McKnight and Mike Lichty closed in. The defending race champion Chris Perley, was right behind.

On lap 11 Vern, McKnight and Lichty all converged on turn one with McKnight coming out the leader, Lichty second and Vern making an amazing save to keep from losing third.

An intense battle of teammates then ensued out front as Perley took over third from Romanoski. Eric Lewis ran a strong fifth holding back Bentley Warren.

A lap 15 yellow for Danny Lane bunched the still large racey field setting up a three-way McKnight-Lichty-Perley battle on the restart. Perley was into second on lap 17. On lap 18 he set up McKnight on the outside and took the lead. Chris described the breathtaking pass, “My car was actually very good on the outside. I wanted to get up there just enough to show him I was there so I could kind of hold both of us off the wall.”

Yellow slowed the race at lap 22 for a spin by Dave Duggan. Now Perley was easily away from the McKnight, Lichty and Romanoski who were fighting for second, which Lichty won moments later. Slowly Lichty reeled in the leader.

As the midway mark passed, the crowd that remained saw Lichty right on Perley’s tail ready to attack as the race was now complete should the rain come again. On lap 30 Lichty actually pulled ahead of Perley as they passed a lap car in turn two, but coming out of four Perley had regained the lead.

Two laps later the luckless Lichty suddenly pulled in the pits with motor problems, ending another good run in his quest for his first ISMA win.

On lap 40 a yellow flew for a potential spin, which did not occur. The allotted caution laps the drivers had been told to fuel for were running out when the race went green again with Perley out front of McKnight and Warren with a few laps cars in between.

Lap 44 saw a yellow for Jeff Locke, as Russ Wood was moving in on Bentley Warren in second. Mark Sammut, Eric Lewis, Ordway Jr., Dave Trytek and Craig Rayvals were next up behind still racing for position. One lap later a simple spin slowed the race once more allowing Warren to get closer to Perley on that restart.

One more lap was complete when the 35 of Trytek tangled with the lap car of Jeff Abold locking the two together coming out of turn four. Untangling the two cars would obviously eat up more laps. It was decision time – stop and refuel for the last four laps and possibly face rain again which showed on the radar or to checker it and call it a night. The latter turned out to be the case. Perley was the winner and as he carried the checkered around, several cars sputtered to a stop due to lack of fuel. Warren, Wood, Sammut and Lichty Jr. finished up the top five.

Sammut was happy with fourth albeit a little disappointed that the race ended early. “Our car was pretty good. We obviously didn’t have anything for the 11 or 84 at the start. I think we were pretty close to everyone else. Lap traffic was a bit of a problem. That kind of determined which one of the leaders went where. It was a great race with Russell and even Bentley for a while. We can’t knock a fourth after starting 13th. It was a pretty good run. Too bad we didn’t get to finish the race. Who knows what would have happened. At the same time we might have been wasting our time also.”

Ordway Jr. came a long way up to get fifth. “We were pretty lucky to finish fifth. We got in a little deal there on the first lap with some slower cars and ended up spinning out and restarting way in the back. I didn’t think we’d ever get back to the top five. We just took our time moving toward the front. 50 laps is quite a ways on a half-mile. We used it all up getting there. But we got up to fifth and that’s all we had. We were actually out of fuel when they stopped the race.”