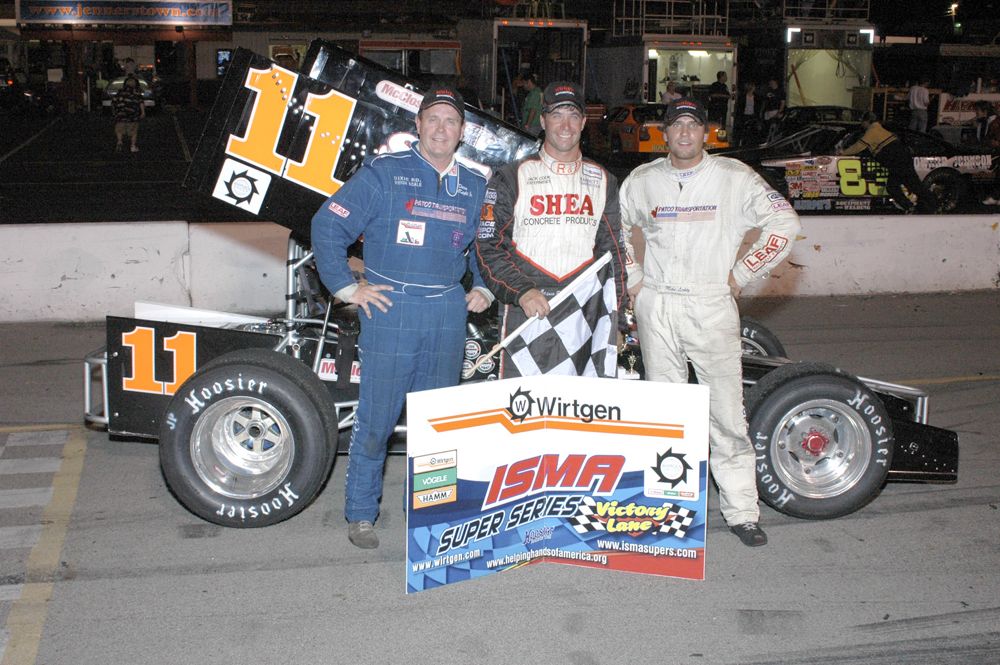 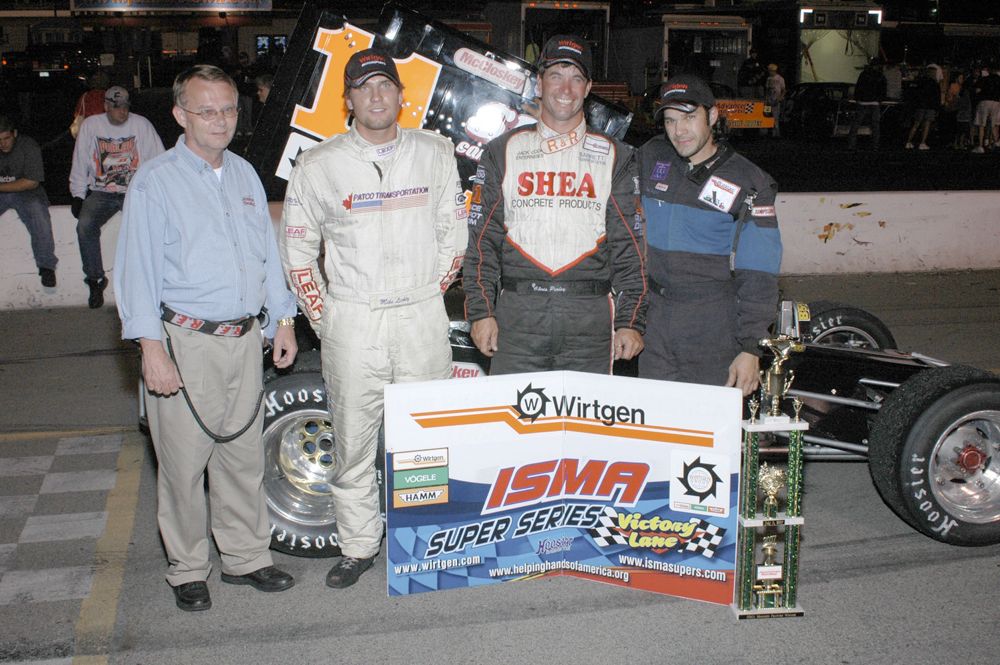 Jennerstown, PA – Five ISMA features run to date. Four wins. Chris Perley has been unstoppable except for one young second-generation driver named Ordway. But a lot of people are trying to do what Ordway did at M-40 and Chris Perley knows they are out there. At Jennerstown on Saturday night Perley came home with his third and fourth wins of the season by taking both legs of the Twin 30 events. It was the second year in a row for that feat for the Rowley, Mass. driver. In the first 30-circuit main Perley was trailed by Dave McKnight and Mike Lichty. In the second it was Bob Magner and Mike Lichty.

After the finale, Perley acknowledged,” Jennerstown is my new favorite track. The car has never turned so good here. We had wicked good corner speed. The first race we gave it everything because who knows what you’re going to have left for the second race and the second race we had everything left. We still had to work on everybody and everybody got a little harder to pass. Magner put on a good show. It was tough to get around him. It was all I had to get by him. And, luckily I was able to stay out in front until the end and I didn’t hit anything. Now, I’m in trouble because I have to compete against Bentley in this very car.”

Mike Lichty, coming ever so close to that elusive first ISMA win, had a good shot at it by starting outside pole for the first race. But, as luck would have it, both 30-lappers went by quickly and saw only one caution each. Lichty took the lead from the beginning and had a formidable opponent in polesitter Ray Graham Jr. in his first race since a rib-breaking accident at Oswego on June 9.

Lichty tried in vain to fend off Graham as the laps ticked rapidly away and while Chris Perley was picking off a car a lap in pursuit. By lap 9 Perley had moved up to fourth with only Jeff Holbrook, Graham and Lichty ahead of him. By lap 11 he was third.

Lap 13 saw Robbie Summers break a hub on the Lane 97, sending a tire flying into the first turn and Summers into the pits.

On the restart, Perley continued his forward charge taking Graham in one lap and then Lichty in another. The Rocket was launched once again while Lichty began to lose sight of the 11. Graham, McKnight, Mark Sammut, Nokie Fornoro, Vern Romanoski and Mike Ordway Jr. continued a race of their own behind.

While Perley melded into lap traffic Dave McKnight used the slower cars to moved into third then second around his teammate Mike Lichty. Graham and Sammut finished up the top five with Fornoro, Ordway, Romanoski, Lou Cicconi and Justin Belfiore completing the top ten.

Perley commented after his first win of the night. “It was awesome. Dave’s been there and it’s just tough to get around them. It’s great racing with them. I don’t know what to say. The car loves it here. It was great from the get-go. And, we came home winning.”

The bridesmaid again, McKnight, said of his race. “Second again. What can I tell you? It just seems that way I guess. The guys did a great job. We’ve been struggling with a bit of an oil leak tonight and it was bothering my vision in the car. The car seemed to get a little better as the race went on. We got jammed up there in traffic with Chris but we’ll see what the second 30 brings.”

Mike Lichty, who lost his second place to McKnight in the waning laps, related, “After the caution there I think we got a flat tire. We picked up a big, big push. Perley got me on the restart and Dave got me with three to go. The car just picked up a huge push. I just have to thank everybody – Patco Transportation, Stage Door and hats off to the whole crew. We worked hard this weekend and we still have one more feature to go. We’ll see what we can do in that one. We’ve got a new motor in the car, it’s making some power and we’ll see what happens in the next 30. I’d still like to pull off that first one. I was looking for it in this one with outside pole and everything.”

Ray Graham Jr. was very content with his fourth. “It felt good just to be able to race again. The car was pretty good. The guys did a great job putting a car back together in less than a week from one that was pretty much destroyed a couple weeks ago. I’m pretty happy.”

As was Mark Sammut with a fifth.” The car was actually pretty decent. It was a little bit tight to start. As the race went on the car came in but it was a 50-lap racecar in a thirty-lap race. I needed a couple more laps at the end there and I think I could have gotten Mike and Ray. But, that’s the way it goes in a 30-lapper.”

The second Twin 30 saw Graham once again on the pole due to the handicapping; Vern Romanoski outside pole this time and sitting back in 12th was Chris Perley. Could he do it again? The answer came quickly.

Graham took up the point this time but the quickest car in practice, Bob Magner, was up from third and into first by lap 12. But, by lap 5, Perley was already fifth as he glided around the fast Jennerstown oval. By lap 10, he was third behind Magner and Graham.

The only yellow of this event came on lap 13 and it was for Graham whose car slowed and stopped before he could pit. Dave Sanborn and Dave McKnight, who was fighting an ill-steering car, also pulled pitside. All returned to the tail of the field.

Back underway it was now Magner with the unenviable task of trying to hold off the black and orange 11 for 17 laps. And, although the young Oswegonian tried valiantly, Perley finally drove by on lap 17 off the fourth corner.

While Perley left the scene with Magner tagging along as closely as anyone can get when the 11 checks out, the racing behind had the fans on the edge of their seats. Mike Lichty and Mike Ordway Jr. were going at it tooth and nail while Nokie Fornoro, Vern Romanoski, Justin Belfiore, and Mark Sammut, still were fighting for spots.

On lap 20 while the 11 and 40 were alone out front, Ordway Jr, who was in his first race ever at Jennerstown, was trying every which way to get by Lichty as the two young lions fought for third. By lap 25, the leaders hit a large pack of lap traffic. Perley glided through while Magner got bogged behind Brandon Bellinger. This allowed Lichty and Ordway Jr. a chance to grab a big spot, while Fornoro, and Belfiore also closed in.

The last exciting five saw Ordway Jr. make a last ditch attempt at Magner while Lichty did the same at Ordway. Diving in and out with sparks flying Ordway made the charge but when the dust settled it was Magner, Lichty, Ordway Jr. and Fornoro the top five.

Chris Perley gave credit to his winning to his car builder and owner Vic Miller and his crew. “Anybody can drive this car right now. It’s just awesome. I’m just the lucky one to be in the seat. The car was great in both races. I think we were a little tighter in the second one. But it had enough. I can’t complain at all. It’s just unbelievable. I was just good enough not to hit anybody and to not get myself in a situation coming up through. Stafford will be a completely different show. I’m going to have a little more competition with Bentley in this car.”

Magner, who was repeating a finish of a year ago, said, “I’m happy with second. I’ve been here before and been behind Chris here before I’m just happy that all the cars are in one piece and we can go home and get ready for Tuesday. The car came together. I don’t think I drove on most of the track throughout the race. It was down in the corners and almost to the grass. It doesn’t matter. You can pretty much race anywhere here. It’s a great place. I’d really like to thank Jeff Holbrook. Because without him I couldn’t drive this car because it wouldn’t be here and neither would I. My Uncle John puts his heart and soul in these things. He’s in the garage all week long. My father is here. My family is here. Without all those guys you can’t do it. Thank you all. I appreciate it and thanks for coming this weekend!”

Lichty, who once again settled into a third spot after trying so hard for a first, chuckled and said, “The whole crew worked so hard this weekend and now we’ll go play at Stafford. I will go there to try and win. That’s why we race. But, we just have to get around that number 11 car first off. I mean I gave my resume to Vic (Miller) and I’m still waiting on him so we’ll see what happens”

Ordway Jr., fresh off his first-career win at M-40, was all smiles. He’d had fun! “We ran good. Perley went by us just before that restart. I tried to stay with him but he took off. The car was really good and I got by Nokie and a couple other guys. Then I got by Lichty for third. With two to go, going into three I thought I could be the hero and go by Magner while he was going by a lap car. I tried to take them three wide and I got in the loose stuff and pushed up. Mike got back by me. But, this is probably the most fun I’ve had all year in a race. It was cool to win but this place is just so fast. It’s out of control and it was fun.”

Nokie Fornoro, who had blown a motor at Toledo, the first in a Soule car in about 17 years, was more than pleased to be back on track with a fifth, coupled with a sixth in the first go. “We were tight in the first one and loose in the second one. What are you going to do? We were good in the warm-ups. I’m just glad that it was s safe race and everybody had a good time. And, congratulations to that god damned Perley and the Miller team. I wish them all the best. They’ve got everything going for them.”

Note: It was announced in the driver’s meeting that a new qualifying procedure would begin at Stafford with Time Trials replacing the Money Won Handicapping system. The top twelve in time trials will be inverted into the heats and the top four from each heat will lineup by their times in the feature.