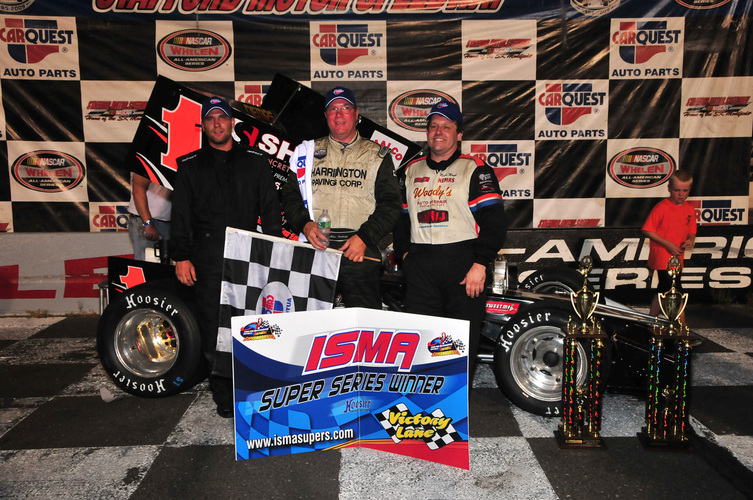 Stafford Springs CT – It’s been a while since 50-year old Mike Ordway Sr. has stood in an ISMA victory lane. He’d spent several years out of competition, but Tuesday night he showed neither the heat nor his absence from regular supermodified competition had slowed him down. He put the Vic Miller number 1 into second just past the lap 10 mark and slowly reeled in race leader Bob Magner who possessed a healthy lead. Twelve laps later Ordway Sr. took the lead and was only challenged slightly after a series of late race yellows bunched the field behind him. It was his first ISMA win since July 23, 2004. The win was Ordway Sr.’s career 31st in ISMA. He stands fourth on the All-Time win list behind Perley, Wood and Warren.

“Car was really good tonight,” said the veteran Fremont, NH driver. ” I owe it all to the crew for putting it back together after Waterford where it was wrecked. They worked on it for three straight weeks and to have it run like this is unbelievable. That’s why Chris won so many races.

“All and all we had a good night. I was surprised the track stayed tight. Usually when it’s hot like this the track gets really loose. It’s great driving for Vic Miller. He only lives down the street from me and we have a lot of fun. I kept watching the board to see who was where. I didn’t see anyone come up until that last restart. I just pushed a little harder to pull away from them. Thanks to everyone who worked on the car, to Carquest and to the fans tonight. It was a hot one!”

Canadian Mike Lichty was right behind the Miller 1 on the last restart on lap 41, but Ordway was able to dodge a potential bullet when he pulled away from the current ISMA point leader. “We all got tied up there early when Louie broke and Ordway got sideways.  I thought that was going to be one of my only chances to get him because he was really strong.  Then Bob Magner broke late in the race in front of me, I thought I had another chance. But, hats off to everybody on the crew and hats off to the Vic Miller team and Russ Wood for coming in third. It’s a good points race and we’re still leading. We came here for a win but we’ll take second.”

Third place runner Russ Wood had a battle going with Chris Perley in the late stages of the 50-lapper, but was able fend off the 11’s attempts to steal third from him.

Said Wood, “We were running against the best of the best for those top spots. We were okay. We weren’t the best car out there. We obviously didn’t have anything for the leaders. But, we’ve been in the top three every time we’ve been here so we’ll take the third. Thanks to Carquest for having us here.

The Carquest Xtreme Tuesday ISMA 50 got off to a bad start, literally, with the caution coming out for a complete restart and unfortunately, two cars coming together at the tail. Hooked were Craig Rayvals in the 04 and Belfiore 98 driven by Tom Tombarello.

One lap was in before misfortune claimed Rob Summers, a winner of the event in 2007, who was also hooked and out of the race.

Bob Magner, in the Holbrook 41, headed away from the rest of the field when the race got underway with Dan Lane, Eddie Witkum Jr and Jeff Locke trailing. Magner was able to distance himself from that trio but things slowed on lap 7 for the Lehnert 92 who appeared to be overheating.

Lou Cicconi moved in on Magner after this lap 7 restart and after another yellow on lap 10 for the Dave Duggan 51, he was closing in. Then suddenly Cicconi was out of the picture as he slowed the 10 and pitted.

Back underway, Mike Ordway took up the runner-up spot with Lichty, Lane, Wood, Perley and Jeff Locke behind with just over 10 laps in.

Magner held off Ordway until lap 22 but relinquished the lead in turn two as Lichty was right there to apply pressure. The transponder computer showed the 84 the fastest car on the track at that juncture but both Magner and Lichty couldn’t track down Ordway who was now flowing in and out of traffic throwing up roadblocks to the guys behind.

Yellow flew on lap 38 to help the cause of those trying to catch the leader when the Duggan car once again spun. In the interim the 5 of Vern Romanoski met with bad luck when his green 5 blew just as he was heading pitside.

After the restart it was Ordway, Magner, Lichty, Wood, Lane, Perley and Locke the top seven who had separated themselves from the rest of the remaining cars.

The Budnick 88, driven by Joey Scanlon was the first to fly the yellow in the last ten laps but misfortune also claimed the 41 of Magner at the same time. He would end up pitside out of second with less than ten to go. Magner described his recurring problem. “We have a valve that switches (fuel tanks) back and forth from the side to the rear. I try to burn them off equally by switching them, but the lever broke again. The lever got us.”

Getting by another set of 51 and 88 spins, the race resumed progressing now to the finish. Ordway was able to pull away from Lichty who was being threatened by Wood and Perley as Locke ran a distant fifth. And, that’s the way they crossed under the checkered eight circuits later.

Perley indicated that he’d struggled to the top five. “I waited for the tires to come in and they didn’t. I searched around for a grove and couldn’t find one that hit me in the face. The right rear never came on. We don’t know why. It durometered good after the heat. But it was good to see Mike back in victory lane and a Miller car in victory lane. We had both cars in the top five and in once piece. So the team can go to Airborne and see what they can do out there. I’d also like to thank Carquest for having us back

Fifth place Jeff Locke, in only his second ISMA season, was pleased with fifth. “It was a good run. I’d like to thank Carquest for without them we wouldn’t be here. Everything went well. We just got tight at the end. We lucked into a fifth place finish. But, we’ll take it and go up to New York next week and get some momentum going. We are definitely getting better. I’d like to thank my father. Obviously I wouldn’t be here without him. And, Richard Witkum, my crew chief. He’s just unbelievable. We’ve been getting better with both of us working together. Thanks also to my wife and my kids for putting up with me.”

Notes:  Mike Ordway Sr. was in victory lane at All-Star Speedway two years ago in the Vic Miller car but this show was a non-ISMA show…Thermometers showed the temps at Stafford hitting 103 or more with track and pit temperatures even higher…Next ISMA show is the inaugural Airborne trek on July 17.