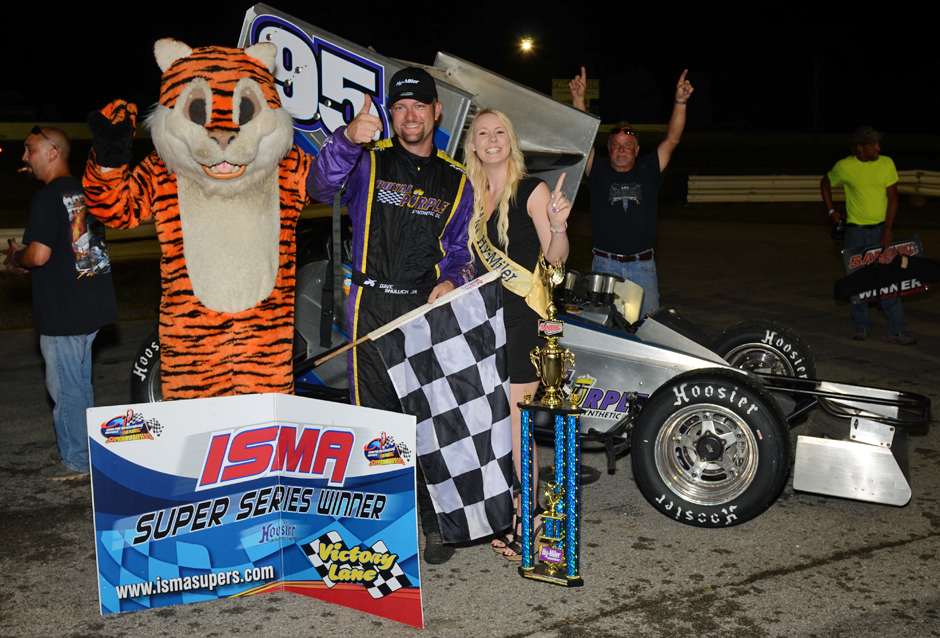 Sandusky, OH – North Ridgeville, Ohio’s Dave Shullick Jr. accomplished what just a handful of drivers have done over the years. He won both legs of the annual Hy-Miler weekend when he won the Hy-Miler Nationals on at Sandusky Speedway on Saturday, after winning the Fast Forty on Friday. Shullick had to battle some tough opponents to accomplish the feat as some of supermodified’s best were trying to etch their names in the historic event. Handicapping put Shullick back in tenth on the starting grid and he had to fight his way forward past some hard racing adversaries.

Heartbreaking mishaps at the point took out early leader Mike Ordway Jr. and Mike McVetta who were looking for their first Hy-Miler wins, leaving Shullick to swap the lead with Canadian Mike Lichty throughout the remaining sixty-plus laps and it looked like Lichty was on his way to his first-Nationals win until a caution, then red on lap 89 gave Shullick his last chance. A restart master, Shoe II was able to edge by Lichty in turn 2, taking the lead on lap 91. Lichty, fighting a tight 84, gave it his all, but it was the 95 of Shullick in victory lane when the checkered dropped, cheered on by the large crowd on hand. The $6,000 prize was just the icing on the cake for Shullick as the win meant much more.

“This is really unbelievable. This is my game seven. This is it for me. I figured we’d just leave it all out there and that’s what we did. On that restart I gave it everything we had and it worked out for us. It could easily have not. I was fortunate that it did. This race is everything to me. It’s what I race for. My dad won it five times. I was able to win it in 2013. To win it again is unreal. I kind of had a feeling.”

“We had our ups and downs this year but I had a feeling we would be good today. It was not without trials getting here but we never quit. I didn’t see Ordway’s deal. I didn’t see where he was or how fast he was. I was just running my own race at that time. Then McVetta had his issues; then Lichty. I was getting loose toward the end. That’s when the restart came and I gave it everything I had. That’s what it boiled down to. Thanks to Royal Purple Synthetic Oil for coming onboard this year. Level Performance Engines built a helluva good engine. And, Elios Financial Group – without them, the whole crew and Jim Bodnar, we couldn’t do it.”

Mark Sammut, a past Hy-Miler winner, was able to capitalize on Lichty’s efforts to fight a mishandling car, slipped into second with only two laps to go. “We came on at the end. You know I was really surprised at how hard everyone was going at it at the drop of the green to be honest. You would have thought it was a forty lapper not the hundred lapper. Unfortunately I lost a couple spots at the start that I shouldn’t have because I was kind of waiting around. I got them back anyway. It was a bad break for Trent, and Mike who was running hard putting on a show with DJ. Unfortunately he lost the car at the end. We were lucky enough to get by them. They really put on a helluva race. We’ll take a second at the Hy-Miler anytime.”

As the racing continued to the very end of the 100-lapper, Timmy Jedrzejek was also able to pick up a spot as Lichty lost a couple. The driver of the Lane 97 was happy with his podium finish.

“Third place is definitely a bonus after the way the race started. I think we backed up to about fifteenth. But, we bought our time. I saw that a lot of guys were sliding around and using their cars up. I thought that was the only chance we had. I think the last thirty laps we were going pretty good. The caution helped things and it gave me a couple more spots. Then a couple guys slipped up at the end and helped us get a couple more spots Our car was pretty solid at the end of the race and that’s what we needed. Hats off to the Lane crew, Dr. Mom’s Says School is Cool, Essex Seafood and Enerco-Mr. Heater and everybody that supports this deal. They really worked hard to get the car here today. We have a different package than we normally run. We weren’t really sure about it and to tell you the truth we still aren’t. I’m just blessed that we got third place tonight. We’re happy we can go home, load it in the trailer and go on to the next show.”

Despite some afternoon showers, the 39th Hy-Miler Nationals event was able to start pretty much on schedule with Eddie Witkum Jr. and Mike Ordway Jr. leading the 24-car field to green. It was second-generation driver Ordway Jr. who grabbed the lead and he was determined to try and add his name to the past winners where his father Ordway Sr. already had a spot on the list.

Mike McVetta, another young lion, tacked himself on Ordway’s tail and the two had control up front with Ben Seitz, Kyle Edwards, Shullick Jr., Sammut, Trent Stephens, Moe Lilje among the next challengers.

The race went non stop as Ordway began lapping at the tail of the field and adding some cushion to his lead. McVetta was able to follow suit and the lead duo held some distance between them and Seitz, Edwards, Shullick and a fast-moving Lichty. Unfortunately for the two out front, their night would end pretty much on a lap 36 yellow when Ordway, met up with a trio of slower cars, one which spun, catching the 61 and sending the race leader into the fourth turn wall. His night was done.

McVetta now became the leader in the restart line but only one lap ensued before a bolt in the panhard bar broke and McVetta had to pit and could not make it back out before the green dropped. That restart also gave Shullick Jr. a chance to move into second past Lichty and the chase was on. Lurking right behind were Trent Stephens, Sammut, Seitz, Dave McKnight, Edwards, Lilje and more as the action was everywhere on the track.

McVetta’s demise now put Shullick in the cat bird’s seat but it was a precarious perch. One lap later, Moe Lilje slowed with a motor problem on the Bodnar 76, and he too, exited a top spot.

Shullick and Lichty began to pull away slightly from Stephens, Sammut and McKnight as the race passed the halfway mark, but a yellow on lap 59 flew the flag for the 64 of Jim Paller which was around in turn four, bunching the field. Paller was able to restart.

Green dropped again and now 40 laps were facing Shullick but they would not be easy ones as Mike Lichty was giving it everything he had to find a way around Shoe II. Stephens was still there as was Sammut and McKnight, a veteran of 30 past Hy-Milers and a winner of one. Otto Sitterly, Shullick’s teammate in the 96, Jedrzejek, Seitz, Witkum and Edwards were nowhere near out of the picture as they continued to weave through the same traffic as the front runners.

As the race approached the twenty-to go mark, Lichty finally was able to make his move as he drove by Shullick for the lead. In rapid succession, Shullick fell back as now Stephens was right on Lichty’s tail. The crowd went wild as Lichty and Stephens came up on a lap car, squeezed by, leaving Shullick in third ahead of Sammut, Sitterly and McKnight.

The pace did not let up until a yellow flew on lap 88 for AJ Lesiecki who appeared to be stopping on the track, but was able to get the 77 moving, and the caution was deemed precautionary, but necessary. The 77 went into the pits and returned.

As the drivers were given the two to go call, runner-up Trent Stephens stopped just off turn one, out of fuel. The 19 was pushed around toward the pit, but he did not go in. With the allotted caution laps now about to be used up, a red flag dropped allowing re-fueling.

Unfortunately for Stephens, he was relegated to the rear of the field when the race resumed. Trent was understandably not happy, but soon complied and took his spot.

On the restart, with ten to go, Lichty and Shullick were still fighting tooth and nail for the win while Sammut, Jedrzejek, Sitterly, McKnight and Witkum remained in the hunt. Stephens started a charge from the back to pick up lost spots.

But, it was Shullick once again using a restart to his advantage, who was able to get by Lichty to take the lead once again.

With nine laps of racing left, Lichty held second and kept with Shullick until Mark Sammut was able to get by for the runner-up spot with two to go. Jedrezek and then Sitterly continued the assault on Lichty moments later leaving the former leader in fifth as the checkered fell.

Sitterly, driving the 96, was pleased with a fourth place. “We were tight the whole race really and tight at the end. Then on that restart I was hoping to get a run at Sammut. We had gotten so we could do some passing between one and two and it slid the nose bad between three and four. Timmy got under me and it was pretty much over at that point. I was just sort of holding on. And, then Mike backed up and we gained the spot we had lost. But, in hindsight, I was better than Sammut before the red but then we lost that spot to Timmy. Overall before the day started I felt if we could just finish and if we could be top five, that would be just great. So we sort of accomplished what we were looking for. We had fun! We passed cars!”

A somewhat dejected, Lichty sat in his hauler analyzing the race he almost won.

“We were way too tight on the restarts. All weekend we were fighting the car being tight. We had a good car tonight no doubt, on the long runs. But it took six, eight laps for the car to come in and then we could roll the corner to the center real good. We could restart good. We wanted to just keep the leaders in sight, track them down and try and pass them if I had the opportunity and we did. Then we got DJ there and on the restart the first time, he just rolled past me because I was super tight. Then we tracked him back down but the car was just taking way too long. At the end there when DJ and I ran side by side for two or three laps, he cleared me and then I went back to running my line to try and run him down. I ran him down a little bit but knew I wasn’t going to be able to pass him, so I changed my line and ran high. Then Mark got under me and I just way overdrove it in three and got up into the marbles, allowing guys to pass me. I was just trying to make something happen. I knew at that point we were going to finish second. It was frustrating. We have been close many times here. All weekend the car wasn’t the same as it usually is here. But, I have to thank everybody… Reed’s Salvage, PATCO Transportation the whole crew and Dennis Level of Level Performance. Everybody works really hard. We’ll go on to my favorite racetrack – Lee, New Hampshire.”